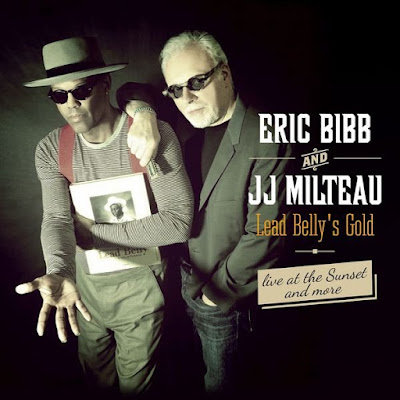 Folk and blues singer Eric Bibb has recollections of Lead Belly's music growing up, whether by recordings by others singing his songs or a children's recording by him. His father Leon (who recently passed on), was at the time beginning to become known in folk circles.  He told Eric of seeing Lead Belly perform at the Village Vanguard in the 1940s. Eric observes, with this background, that the sound of Lead belly and his 12 string is part of his musical DNA. He pays tribute to the great musical bard with French harmonica player JJ Milteau on "Lead Belly's Gold: Live at the Sunset and more" (Stony Plain). This was mostly recorded in performance at the Parisian club, The Sunset, supplemented by a few studio recordings. With Larry Crockett on drums and percussion, and occasional vocals from Big Daddy Wilson and Michael Robinson, and Gilles Michel adding bass for a few selections, Bibb delivers 12 performances from Lead Belly's repertoire along with 3 originals inspired by Leadbelly.

There is much to enjoy from the life invested into the songs by Bibb. It starts with the formidable rendition of "Grey Goose." Milteau's harmonica playing also provides more than musical accompaniment. Often his playing suggests a button accordion as on the lively "Midnight Special" with Bibb's guitar sounding more like additional rhythm. There is a marvelous spiritual medley "When That Train Comes Along / Swing Low, Sweet Chariot," where Bibb's vocals is joined by Big Daddy Wilson. Bibb's gentleness of his appraoch adds to the appeal of "Bring A Little Water, Sylvie," with  light, finger-style guitar and Milteau's buzzing harmonica accompaniment. Crockett's deft drumming adds to the musical delight.

"When I Get To Dallas" is an alluring original inspired by Lead Belly's early days as a street singer. Bibb's flowing guitar certainly provides a contrast to Lead Belly's more emphatic rhythmic 12-string playing on "Pick a Bale of Cotton," which is followed by a plaintive, "Goodnight, Irene." The concert portion concludes with a lively "Rock Island Line," while the studio portion opens with a soft spoken treatment of "Bourgeois Blues," Leadbelly's complaint about segregation in 1930s and 1940s Washington DC. The original "Chauffeur Blues," imagines Lead Belly speaking to John Lomax in the afterlife.  This fervent performance, unlike "When I Get To Dallas," has less of Leadbelly's style in its performance.

After Bibb plays a 6-string banjo on Leadbelly's retelling of the "Titanic" disaster, the album concludes with "Swimmin' In A River Of Songs." Here, Bibb sings as if he was Leadbelly singing about his life story. It is a marvelous original that like Bibb's renditions of Lead Belly's songs, shows how accomplished he is. With the varied and sympathetic playing of Milteau, Eric Bibb has recorded a wonderful tribute to a man whose life and music still seems larger than life.

I received my review copy from a publicist. Here the two perform "Grey Goose."