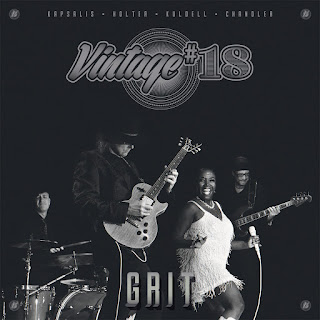 The Washington DC area blues and rhythm group debuts on CD with this recording. Comprised of vocalist Robbin Kappalis, guitarist Bill Holter, drummer Alex Kuldell and bassist Mark Chandler has been performing since 2013 and this writer has had the pleasure to enjoy them perform a number of times.

With the solid rhythm section here, the focal point is the very expressive singing of Ms. Kappalis (who is quite an exciting live performer) and these solid originals showcase her authoritative, nuanced, oft powerful, expressive singing with Holter's fiery blues-rock pyrotechnics (overdubbed at times) featured as well. This is evident on the seductive opening "Diamonds Are Optional," where Kappalis asks her man for a kiss as diamonds are optional. On the lazy shuffle "Love Hangover," she sings about the shivers up her spine from the good loving she has received with Holter adding bluesy fills behind her vocal before taking his own solo. He impresses not simply with his imposing technique, but his conciseness here and the interplay between his solo and his rhythm guitar on this.

One of the two covers of the 11 selections here is a slow, bluesy reworking Bob Dylan's "Million Miles," with simple bass and drums accompaniment to the soulful singing and the impressive guitar fireworks followed by the rockabilly flavored shuffle "Circles," with more fine singing and impressive, understated playing. The tempo slows down for the moody "Pieces," a remembrance of endless nights filled with love, but now those days are gone . It has an ambience suggestive of The Doors' "Riders in the Storm." The other cover, Z.Z. Top's "Just Got Back From Baby's," becomes a wonderfully done slow blues.

One shortcoming might be the austere, skeletal backing on most of these tracks. A bit more life rhythmically from the bass and drum would make the singing and searing guitar sound standout more,  and provide more variety in the musical color palette, although one appreciates the uncluttered quality of the performances here. Still, there is plenty of "Grit" on this intriguing debut by Vintage 18.

I received my review copy from a publicist. For more information on Vintage 18, including some video clips visit the group's Facebook page, https://www.facebook.com/VintageEighteen/?ref=br_rs.