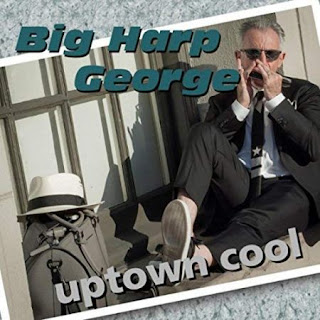 A follow-up to his outstanding debut, "Chromaticism," George Bisharat returns with a new dozen originals that reinforce the well-deserved praise the earlier release garnered. Here he is backed by an outstanding studio band that includes producer Chris Burns on keyboards, Kid Andersen on bass or guitars, and Little Charlie Baty on guitar, with well arranged horns throughout. He displays not only very strong harmonica playing horn like lines, but very appealing singing that is delivered honestly and in a straight-forward fashion.

There is plenty of wry humor, as well as perceptive social commentary such as the amusing "Internet Honey," which also has a choice trombone solo from Mike Rinta, sax solo from Michael Peloquin in addition to Kid Andersen's brief stinging guitar solo. Then there is more humor (and social commentary) in "Alternative Facts," where George notes, that while he thought truth matters, submits his alternative fact that he taught Little Walter everything he knew. "I Wanna Know" has a crisp latin rhythm groove, booting sax solo and Charlie Baty's Spanish-tinged acoustic solo prior to George's crisp, jazzy playing here. I could imagine Santana performing this song.

"In the First Place" is a crisp instrumental shuffle that displays his mastery without going all out as well as the wonderful backing throughout this track with their interplay with his harp lead and the nice relaxed tempo. "Cold Snap By The Bay," is a deep, slow you topical blues about living in this paradise but three died in San Jose due to a cold snap. Musically it evokes an Otis Spann recording "Look Like Twins," and Chris Burns plays wonderfully in a Spann-like fashion. It showcases how Big George updates classic Chicago blues settings while remaining true to his musical roots. The title track is a jazz-inflected instrumental, taking at a lazy, walking tempo with Burns on organ. Baty crafts a neat solo, before the leader's solo that I am sure the late Toots Thielemans would have enjoyed.

Simply stated this is another impressive recording that has a wonderful mix of grooves, wonderful playing, strong originals and heartfelt singing that should appeal to anyone with a love of real blues.

I received my review copy from a publicist. This review appeared originally in the July-August 2018 Jazz & Blues Report (Issue 379), although I made minor stylistic edits to that review. Here is a video for "Alternative Facts."