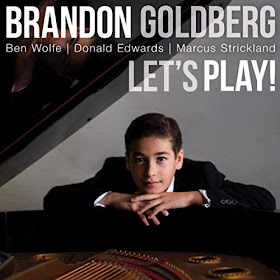 Joey Alexander isn't the only precocious young pianist to emerge in recent years. 12 years old when Brandon Goldberg recorded this album, he has been raising eyebrows with his considerable piano skills. His teachers include Shelly Berg, Avery Shape, and Matt Wilson, and he has been mentored by Monty Alexander. Alexander is quoted in this booklet including observing how he is "always knocking out the crowd." I note that he received a DownBeat Student Music Jazz Instrumentalist Soloist Honors Winner in the May 2019 issue. On his debut recording, he is accompanied by Ben Wolfe on bass and Donald Edwards on drums with tenor saxophonist Marcus Strickland adding tenor sax to two of the nine selections.

He is a player who follows his own muse opening with Monk's "Well You Needn't," where he perhaps plays less angularly and with more fluidity than usual. He hints at the melody more than stating it but impresses with his imagination and the logic of his solo. "Angel Eyes," is a number that he talked about with Alexander (who had accompanied Frank Sinatra on it) and listened to him play the changes, resulting in an austere performance that had hints of Monk's "'Round About Midnight" about it. Edwards deftly using brushes on this.

"You Mean Me," a contrafact of Monk's "I Mean You," is played with a funk groove. Strickland plays some rugged tenor sax while Goldberg's playing is more angular here. Other originals include the dynamic "The Understream" with Edwards featured and his tribute to McCoy Tyner, "McCoy," with an auspicious introduction by bassist Wolfe. The Beatles' "Blackbird" receives an exquisite interpretation. There is also delightful melodic quality to his performance to Herbie Hancock's "Dolphin Dance." Strickland is superlative on this as well.

He interprets two Duke Ellington numbers. "Caravan" opens with Edwards' rumbling solo and then Goldberg stirs listeners on piano and Fender Rhodes by his use of polyrhythms and a clever riff. A solo rendition of "In a Sentimental Mood" is inspired by Ellington's introductory riff his recording with John Coltrane. It is engrossing to see how Brandon constructs and develops a solo showing a musical maturity well beyond his age.

With the superb backing he receives from Wolfe and Edwards, and Strickland's noteworthy contributions, Brandon Goldberg has produced a superlative jazz piano recording, not simply a promising debut.

I received my review copy from a publicist. I have made stylistic changes to this review which first appeared in the May-June Jazz & Blues Report (Issue 384). Here is Brandon Goldberg performing "You Mean Me."