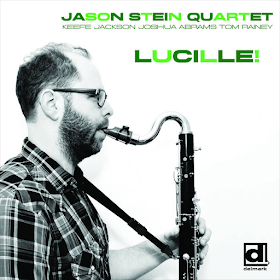 Very welcome is this new release from Stein, one of the few bass clarinet specialists. As on Stein's Delmark debut "This Story, this Time," Keefe Jackson is present with his tenor sax (and contrabass clarinet for a couple numbers) and Joshua Abrams is on bass. Drummer Tom Rainey replaces Frank Rosaly who was on the earlier release as the quintet negotiate here several originals along with some songs representing the Tristano school as well as bop standards from Charlie Parker and Thelonious Monk.

About the earlier album I wrote, "Some might describe this as free jazz, but that may refer to the looser musical structures they build their improvisations and with few exceptions do not relate to frenzied or frenetic playing … ." Certainly the interplay between Jackson's tenor sax and Stein on Warne Marsh's "Marshmallow' establishes the 'in the moment' quality of the performances here with Abrams and Rainey providing an almost atemporal underpinning between their well crafted intricate interplay. Stein's own "Halls and Room" has Stein stretching out as his serpentine lines illustrate his focus on the normal range of the instrument (say compared to Dolphy's bluesy employment of the upper range) and followed by a sober tenor sax from Jackson, set against Abrams' bass before Rainey joins in to support the smoldering heat in Jackson's solo.

Jackson's contrabass clarinet sets out the theme on Parker's "Dexterity," a nicely loose rendition of this modern music classic (to use the phrase Symphony Sid employed in radio broadcasts of Bird). Equally engrossing is the performance of Monk's "Little Rootie Tootie," again with Jackson on contrabass clarinet), with some honking, squawks and other effects again with the two clarinets weaving in and around each other. The interplay between tenor sax and bass clarinet also is present in their vibrant handling of Tristano's "Wow."

Stein's own "I Knew You Were" has a floating drone-like quality as a duet by him with Abrams as Rainey adds some understated accompaniment and on Tristano's "April," Stein states the theme as well as ably negotiates the twists and turns of the melody before Jackson's tenor joins in adding his weight and counterpoint to Stein's lead. It is a strong close to a terrific new recording from Jason Stein.

I received my review copy from Delmark. Here is "Marshmallow" from this album.