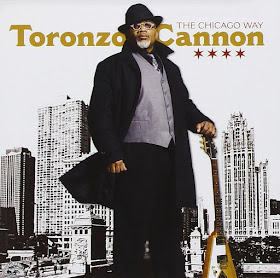 After his two superior albums on Delmark, many were pleased to learn about Alligator Records signing Toronzo Cannon and now we have his label debut "The Chicago Way." Those who enjoyed his prior releases will not be disappointed with this and it is likely to raise his profile, not simply in the blues world. Cannon wrote all eleven songs on "The Chicago Way" and is backed by his band The Cannonball Express. The band consists of Brother John Kattke, Hammond B-3 Organ, Piano, Keyboards; Pete Galanis, Electric and Acoustic Rhythm Guitar, Larry Williams, Bass and Melvin "Pookie Stix" Carlisle, Drums. Kattke also arranged the three piece horn section on a few selections.

This is hard-hitting music that might superficially be compared to Son Seals. Certainly Cannon's searing buzz-kill guitar bears a similar intensity to what the late Seals brought to his music. And like Seals, Cannon is all business. His music though is a bit more urban and soul-rooted than Son. Like Son Seals' music, Cannon's music reflects his own life and experiences from growing up in the shadows of the Chicago projects, to working as a bus driver and listening and observing the city life around him.

The tightly performed and hard-hitting playing on "The Chicago Way" provides a frame for his telling social commentary like the opening "The Pain Around Me." Starting off in a funky manner, it has a lyric about six kids on the corner, six broken homes, and Toronzo not wanting his kids to go outside because of the thugs hanging around. Furthermore, he doesn't want to sing this but this is what he, in fact, sees. There is plenty of fire in his playing and vocal with his band tightly backing him.

In contrast to the serious  opening track, one hears plenty of humor in his lyric about a marriage gone bad on a funky shuffle "Bad Contract." This bad contract is the one where you sign on the line and only gets half back when its over. The driving shuffle "Fine Seasoned Women," has Toronzo fending off a flirting lady who is trying so hard to catch his eye. Cannon, however,  prefers a lady with a touch of gray or wrinkles, who wants a man, not a fool. There is nice use of horns on this along along with his crisply played guitar. The humorous "Midlife Crisis" is another number that speaks to those of us who have put more than a few years (and it has a great line about hair on the chest turning grey). Perhaps this writer's favorite track is a wonderful slow blues, "When Will You Tell Him About Me?," with Toronzo complaining  about being tired of the secrecy with which he and his woman must keep their affair.

As a songwriter, as well as a singer-guitarist, Toronzo Cannon brings grit and passion. His playing is varied ranging from blues-rock to jazzy flavored while his singing is robust resulting in the mostly compelling performances here. "The Chicago Way" is one of most striking recent new blues releases.

I received my review copy from Alligator. To give you a sample, here is a recent performance by Toronzo of "The Pain Around Me."