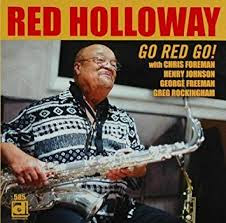 Delmark has just issued the label’s debut recording by the veteran tenor saxophonist, Red Holloway, “Go Red Go!” A contemporary of Von Freeman and the late Johnny Griffin at Chicago’s fabled Du Sable High, he came up under the tutelage of Captain Walter Dyett who advised his students to practice outside to develop their sound. Particularly important influences on Holloway were Ben Webster and Sonny Stitt, leading to his big, rich tone and fleet agility which certainly did not inhibit his ability to straddle the blues and jazz worlds growing up. He played on some classic Chicago blues sessions as well as jazz dates. His career has run the gamut to backing Charles Brown in the studio in the late sixties (with Charles calling out Red by name on a choice tenor solo) to the 1989 “Locksmith Blues,” date for Concord co-led with Clark Terry.

“Go Red Go!” finds him blowing with vitality backed by organist Chris Foreman and his trio (guitarist Henry Johnson and drummer Greg Rockingham). Its a buoyant swinging date opening with a lively “Love Walked In.” Legendary guitarist George Freeman takes over the chair for Holloway's late night blues, “I Like It Funky.” The title track is a retitled rendition of an Arnett Cobb sax sender as he takes off at rug-burning tempo, followed by the more romantic feeling of the standard “Deep Purple,” a prime vehicle to display his sensuous ballad playing with his vibrato evoking Webster.

Holloway also provides his own take on “Stardust,” one of the ballads Webster was most associated with. Sonny Rollins classic calypso “St. Thomas,” is an unusual choice perhaps but Foreman’s solid unison playing and chording underneath his dancing solo adds to its charm and Johnson takes a nice solo here as well. There are strong interpretations of “Bags Groove,” and Antonio Carlos Jobim’s bossa nova classic, “Wave." Guitarist Freeman rejoins him for the delightful reworking of Roosevelt Sykes', “Keep Your Hands Off Yourself,” that closes this album as he enthusiastically delivers the vocal with Foreman anchoring the performance and getting greasy during his solo that precedes the solos by Holloway and Freeman. Holloway used to play with Sykes.

Holloway may not be a great singer, but the entire performance is simply too much fun and ends a finger-snapping, toe-tapping recording of first-rate jazz for lovers of tenor sax and organ jazz. He ain’t getting older, he’s just aging marvelously.

I received this review copy from Delmark, but am uncertain whether this 2009 review was ever published. (Correction, It was published in the July 2009 Jazz & Blues Report (Issue 318)). Here is Red Holloway from a decade singing and playing "Cleanhead Blues."