I still remember seeing Elvin Jones at the Tralfamdore Cafe in Buffalo. It was an amazing weekend of music. The only member of the band I remember was guitarist Ryo Kawasaki. It was great to watch Elvin behind the drums with the energy and joy he displayed while playing.

Today we sample a few of the recordings he played on starting with one with the classic John Coltrane Quartet. Here is "Chasin' The Trane" that for parts is a duet.


One of Elvin's first recordings was with Sonny Rollins at the Village Vanguard. When Sonny signed with Impulse Records, Elvin and Jimmy Garrison were on some of the sessions including "East Broadway Run Down."


Elvin made a few recordings with his brothers Thad and Hank. here they perform "Three and One."


Our final selection is with Pat LaBarbera on sax, David Williams on bass and Ryo Kawasaki on guitar, playing "Three Card Molly" a few years after I saw Elvin in Buffalo. 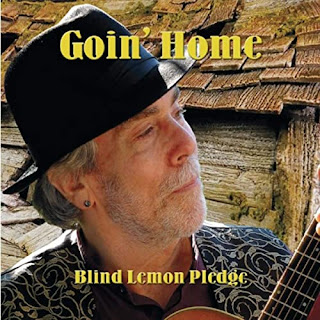 Blind Lemon Pledge is the roots and blues name for James Byfield. Recently, I reviewed a recording by him as Blind Lemon Jazz that consisted of mostly originals he wrote evoking the Great American Songbook. However, he left the vocals on that release to another singer. This present album features his guitar and vocals with bassist Peter Grenell. The two tackle a variety of well-known blues songs with a few more recent blues-based folk songs.

The performances have the feel of a house concert with the simple instrumentation. Byfield is an affable, if not outstanding, singer and a vigorous guitarist. He interprets a broad range of material, including a straight-forward cover of Muddy Waters' "I Feel like Going Home," with him playing slide on a resonator guitar. A stripped-down interpretation of Little Willie John's "Fever" is followed by a heartfelt, pleading rendition of Walter Davis' "Come Back Baby," with a nicely constructed guitar solo. I was not familiar with J.J. Cale's "Crazy Mama." Byfield's whispering vocal and slide playing make this among this album's high points. Byfield's "Sugar Rush" is an amusing bawdy blues with some impressive 12-string guitar. An unplugged duo version of Fenton Robinson's "Somebody Loan Me a Dime" is followed by a spirited rendition of "Big Road Blues." Also noteworthy is an imaginative interpretation of Lonnie Johnson's "Too Late to Cry." A remake of Hot Tuna's "I Know You Rider" has a country-folk feel.

While I would be hard-pressed to find this to be an essential recording, "Goin' Home" has many charms that will appeal to folk-blues and Americana enthusiasts.

I received my review copy from a publicist. Here he performs "Come Back Baby." 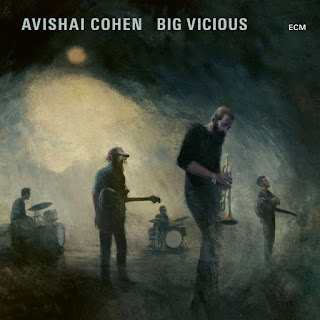 Speaking of his new album "Big Vicious," Israeli trumpeter Avishai Cohen states that the recording reaches far beyond jazz. "We're all coming from jazz, but some of us left it earlier. Everyone's bringing in their backgrounds, and that becomes part of the sound of the band." Textures from electronica, ambient music and psychedelia are part of the musical blend, as are grooves and beats from rock, pop, trip-hop and more.

The album title also reflects the name of the group heard on this. Joining Cohen, who plays trumpet and synthesizer, and provides effects, are guitarist Uzi Ramirez, guitarist/bassist Jonathan Albalak, drummer Aviv Cohen, and drummer Ziv Ravitz. About this group, Ravitz observed that "In the combination of everything, this is a magical group. It's very special because you would expect it to explode, with total drama. But the music is deep, and very melodic."

There is a mix of repeated grooves and Cohen's inquisitive lyrical trumpet. Guitarist Ramirez (who I assume he takes most of the solos) has his own melodic qualities. "Hidden Chamber" is a fascinating number that also includes Ravitz's sampling of some speeches at the close. "King Kutner" has an album rock groove with the mix of searing guitar lines as well as effects, and Cohen's soaring trumpet quite engaging. Then there is a haunting interpretation of Beethoven's "Moonlight Sonata," with Cohen's melancholy trumpet over the trebly guitar backing. "Fractals" has an intriguing mix of a synthesizer with various effects, including the use of echo that lends an ethereal quality to Cohen's trumpet. The textures the ensemble creates adds to the mesmerizing quality here. The variety of moods is further displayed by the alluring guitar interplay on "The Things You Tell Me," with Cohen adding atmospheric trumpet midway.

The sound of this recording is superb, as one expects with ECM. The music on "Big Vicious" has grown on this listener with repeated listening with Cohen's evocative trumpet, and the mesmerizing background provided that results in some stunning music.

I received a download to review from a publicist. Here is "Teardrop" from Big Vicious. 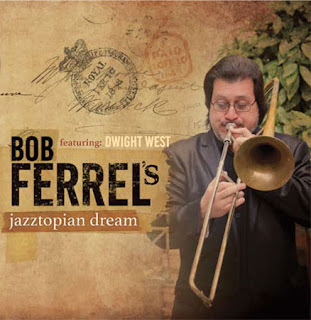 One gets overwhelmed at times with releases, that some get lost. Trombonist Bob Ferrel's album from 2017 is one that I recently discovered rummaging around. Ferrel is a four-decade veteran of the Duke Ellington Orchestra and also spent twenty years touring with Southside Johnny & the Asbury Jukes. It was about time he recorded as a leader. He has assembled a strong studio band with the likes of trumpeters Vinnie Cutro, and Rob Henke, saxophonists Joe Ford, Frank Elmo, and Roy Nicolosi, pianist Sharp Radway, bassist Daryl Johns, drummer Steve Johns, and percussionist Frank Valdes. Several songs feature vocalist Dwight West

The music on this album ranges from a larger jazz combo to a big little band. It showcases Ferrel as a masterful vigorous trombonist whose sense of dynamics ranges from deep growls to cottony melodic caresses. He solos on all ten selections. With the handsomely provided arrangements, the music is generally in a swinging post-bop idiom. His ability to caress a melody is evident on the opening "My Secret Love." "Yardbird Suite" is one of the four vocals by West, who impresses with the clarity and warmth of his singing. Former McCoy Tyner alto saxophonist Ford places his stamp on this performance with his solo. Most folks associate 'Don't Go To Strangers" with the late Etta Jones, but West's vocal with a brisker tempo leads to a fresh take on this. West also sings on a riveting interpretation of Pharaoh Sanders' "You've Got To Have Freedom." This is another selection with a Joe Ford solo, with other solos from the leader and trumpeter Vinnie Cutro.

Slightly different personnel are present for the Latin Jazz of "We Began With A Kiss," with Hector Davila on piano and Ruben Rodriguez on the Zorko baby bass. Ferrel's only original, "Soul Bop," opens with some growling multi-phonics and some of the most open playing on this. The Jazztopian dream closes with a rollicking "Everyday I Have the Blues." In this performance, they sound like a mini-Basie band. West incorporates a bit of Louis Jordan's lyrics from "Let the Good Times Roll" in a top-flight vocal. Radway is fabulous on this, while Ferrel growls a blues-drenched trombone solo. Hopefully, others besides me, will also no longer overlook this gem of a recording.

I likely received my review copy from a publicist. Here is a promotional video for this recording. 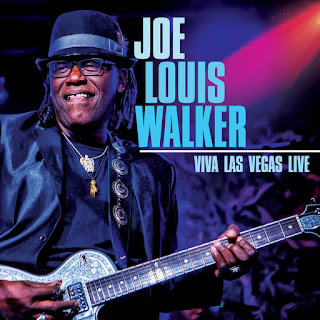 "Viva Las Vegas Live" is, I believe, the 26th album from Joe Louis Walker, and the 4th live album, in his Hall of Fame recording career that goes back to 1986. Of the blues artists who emerged from the 1970s on, I would be hard-pressed to find one who has produced such a substantial body of music as well as continues to play such a diverse repertoire. Besides his superb, imaginative guitar playing, he is one of today's blues most powerful, moving singers.

"Viva Las Vegas Live" is available as a CD/DVD package, with the same music on both. It was recorded and filmed at The Railhead at the Boulder Station Hotel and Casino on August 2, 2018. In addition to Walker's guitar and vocals, Bruce Bears is on keyboards, Lenny Bradford on bass, and Dorian Randolph on drums.

The songs here span over two decades of Walker's career opening with the hot rocking "I'm Not Messin' Around" and include the driving blues-rock of "Do You Love Me." One risk of live recordings is that some performances are better experienced live. On disc, the same performance sounds over-extended. "Sugar Mama" has strong vocals and guitar, Bears is first-rate, and Walker even plays some harmonica, but at 16 minutes it goes on a bit too long for these ears. While lengthy, it is not a poor performance.

One can appreciate that Walker maintains such a broad and deep repertoire. "In the Morning" was the title track of his 2002 Telarc album, while "Soldier For Jesus" harkens back to his gospel roots. A rollicking rendition of "Too Drunk To Drive Drunk" has some Chuck Berry styled guitar along with Bears' barrelhouse piano. A rocking "Like It That Way," with some intense guitar has him tell his women to give Walker all her love, that's all he needs. All the band members solo on this selection.

The DVD is pretty straight-forward in presenting these performances with crisp camera work that focuses on Walker and his band. There may be a few flaws here, but that does change the fact that this album is an accomplished live recording.

I purchased this. Here is the official trailer for this release.

The THEK Jazz Quintet Plays the Music of Sam Jones 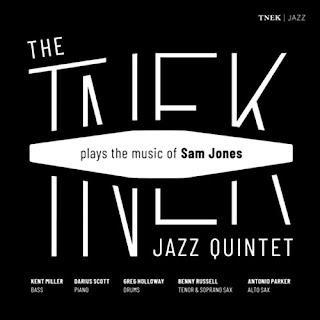 Bassist Kent Miller leads a quintet drawn primarily from the Mid-Atlantic on a musical exploration of the music bassist-composer Sam Jones. The other members of the quintet are pianist Darius Scott, drummer Greg Holloway, saxophonist Benny Russell, and saxophonist Antonio Parker. Jones wrote six and the great Kenny Barron one, of the compositions on this album.

Several of the numbers will be familiar to many from the great Cannonball Adderly groups that Sam Jones was a member of. The disc opens with a driving rendition of "Unit 7," that producer Ron Kearns observes was Adderly's unofficial theme song. Kent anchors a terrific rhythm section while Parker (on alto sax) and Russell (on tenor and soprano sax) are strong blues-rooted soloists. This and other performances evoke those great Adderly bands. Drummer Holloway kicks off "Bittersuite" trading fours with Scott, before the horns and Miller dive in. There is plenty of swagger in Russell's brawny solo on this. Miller establishes the groove with his energetic bass riff on "Some More of Dat," and Miller' displays his considerable technique as thoughtful playing on his solo. Then there is a lovely ballad, "Lillie," that showcases Parker's ballad style. "i" is another steamy performance that may be familiar from Adderly's recordings and performances.

I received my review copy from a publicist. Here is a performance by The Kent Miller Quartet with everyone on this CD but Antonio Parker.

One of my favorite blue shouters was Smiley Lewis. The New Orleans singer and guitarist had many superb recordings, but alas some of his records became better known when reworked by others. Here are five recordings by him.

First up is "Tee-Nah-Nah," a version of the "Junker's Blues." I think it is Tuts Washington on piano.


As I mentioned, some of his recordings became hits for others. One example was "Blue Monday" which was a smash for Fats Domino.


Smiley Lewis could jump the blues as strongly as anyone as can be heard on this hot "Can't Stop Loving You."

Another gem that many probably know more from Dave Edmunds recording.


We close with another recording that could only have been recorded in New Orleans.


I do believe I will have to do another Smiley Lewis playlist sometime down the road.
Posted by Ron W at 6:30 AM No comments: