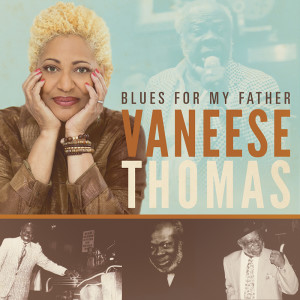 The youngest daughter of the legendary Rufus Thomas, Vaneese Thomas, like her sister Carla and brother Marvel, been involved in the music business dating backing to singing back-up vocals for Stax. After college she relocated to New York where she was a session singer and songwriter.

She has issued several albums that showcase her singing and songwriting, and the latest is “Blues For My Father” (Seque Records). It had been five years since her last album “Soul Sisters Volume 1” (Segue Records), where she resurrected classic soul recordings from the likes of Bettye Swan, Tina Turner, Etta James and her sister Carla. This new recording, as indicated by the title, has her delving more into blues and she contributed ten originals as well as handles two covers, one of which is from her late father.

Produced by Thomas and her husband Wayne Warnecke, there is a variety of musicians appearing on this but the core is Buddy Williams on drums, Will Lee on bass, Robbie Kondor on piano and Tash Neal on guitars and Warnecke on percussion. There are appearances by (among others) Marvel Thomas and Paul Shaffer on organ, Ron Mathes and Jeff Mironov on guitars, horns led by Tim Ouimette and Perry Gartner and Shawn Pelton on drums.

What stands out on “Blues For My Father” is Thomas’ vocals. Rob Bowman, who penned the liner notes “Vaneese’s masterful control of phrasing, breath, intonation and timbre.” In other words she can flat out sing with a display of vocal dynamics as well as power to leave a strong impression on the listeners. She belts out about having the blues sitting at the station waiting for the train to bring her lover back on the opening “Southern Central Blues.” Then she gets sassy celebrating her man who plays no tricks and “10 X The Man You Are.“

The Memphis funk of “Wrong Turn” is a delightful duet with sister Carla (while Marvel adds organ) with some punchy horns in the backing and a crisp guitar solo from Jeff Mironov. “Wrap You Arms Around Me” has a bit of southern rock feel as Tash Neal is on dobro with Mironov again on guitar. Part of the melody here is evocative of the Ricky Allen recording “Cut You Loose,” although her lyric is telling her man to allow her to be strength for him and "wrap your arms around me and never let go.”

The centerpiece of this release is a duet with her father, “Can’t Ever Let You Go.” Like Natalie Cole did with her recordings with her deceased father, Vaneese adds her vocal to the original Rufus Thomas recording. Husband Warnecke pulled out Rufus’ vocal from the original analog masters, added some exhortations from other Thomas recordings, then provided a contemporary backing and guitar and sax solos along with Vaneese improvising around her father’s vocals.

Other highlights on this set include “Corner Of Heartache And Pain,” a straight, slow blues about the pain felt after her man left with. Paul Shaffer on organ. “Love’ Em And Leave’ Em Behind” is a soulful number where Vaneese tells a heartbreaker she has seen her friends in too much pain but he won’t do the same to her. “Southern Girl” is a celebration of her roots and the south with Kirk Whalum taking the sax solo. There is also a straight cover of John Fogerty’s “The Old Man Down The Road” before the disc closes with a wonderfully sung lament, “Blue Ridge Blues” backed simply by Rob Mathes’ guitars.

“Blues For My Father” is a showcase of Vaneese Thomas’ craft as a songwriter and her soul-shaking vocals and should have considerable appeal among blues and southern soul audiences.

This review was written in Fall 2014 and appeared in issue 361 of the Jazz and Blues Report (issue 357). She will be appearing at the Pennsylvania Blues Festival this coming weekend (July 26). Here she is performing live.

The Pennsylvania Blues Festival approaches quickly. The following has appeared in the May-June Jazz & Blues Report (Issue 360) that can be downloaded at jazz-blues.com.

Celebrating 24 years of Blues in the Poconos, the Pennsylvania Blues Festival takes place at Split Rock Resort, Friday July 24 through Sunday July 26. It moves to Split Rock in Lake Harmony, Pennsylvania after 4 years at the Blue Mountain Resort. The new location is close to the original Festival location on Big Boulder Mountain. "The Blues Lovers Blues Festival," as it calls itself will be headlined by Shemekia Copeland on Saturday the 25th and Lil Ed and the Blues Imperials. There will be zydeco from Dwayne Dopsie and the Zydeco Hell-raisers as well as gospel from the Highway QCs,and such notable performers as Walter 'Wolfman' Washington; John Nemeth and Alvin 'Youngblood' Hart.

Friday night, June 24, the Festival opens with an Indoor Showcase with Mikey Junior's Blues Review, featuring the fine harmonica player and vocalist. It takes place inside the Galleria at Split Rock.

Saturday June 25, the Festival Main Stage opens with Dwayne Dopsie and the Zydeco Hell-raisers. One of the sons of zydeco legend Rockin' Dopsie. Dwayne Dopsie's hard-driving and rocking music is also heavily influenced by Clifton Chenier and similarly he is marvelous blues singer and player as well as traditional zydeco artist who will also do a Hendrix-influenced rendition of "Hey Joe." Besides opening the main stage he will close the Tent Stage that night. Alligator Recording Artist Selwyn Birchwood, winner of the International Blues Challenge a couple years back, brings his exuberant blues with his tight band, solid vocals and guitar, including lap steel (he was mentored by Sonny Rhodes). Severn Records artist Sugar Ray & The BlueTones follows and the group led by Ray Norcia has been laying down Chicago styled blues for nearly 40 years (This writer saw them in 1978 in New York backing J.B. Hutto. Norcia a marvelous singer (reminiscent of Junior Parker and he had a stint fronting Roomful of Blues) and fine harpist is backed by Monster Mike Welch on guitar; Anthony Geraci on keyboards, Michael 'Mudcat' Ward on bass, and Neil Gouvin on drums. New Orleans Icon, Walter 'Wolfman' Washington and the Roadmasters is up next on the Main Stage bring there mix of blues, soul and funk. Closing the Main stage will be Shemekia Copeland who recently resigned with Alligator Records bring her tight band and her powerful vocals on a mix of blues and blues-rooted material that underscores why she has been named Koko taylor's successor as "Queen of The Blues."


In addition to the Main Stage, others acts will be presented in the Tent Stage. Electro-Fi Recording Artist Harmonica Shah & Carlton Washington will open the tent stage and play a second set later. Also in the tent performing two sets is John Mooney. Mooney mixes Delta Blues with the New orleans second-line. Growing up in Rochester NY, Mooney was mentored by legendary Son House and his most recent recording is a tribute to the Delta Blues Icon. Dwayne Dopsie closes out the tent Stage after Mooney's second set. Later Saturday evening, Bobby Kyle will lead a Tribute to Johnny Copeland in the Galleria Governor's Ballroom.

Blues on Sunday July 26 starts with a Blues Brunch in the Governor's Ballroom featuring Slam Allen, a dynamic singer and guitarist who spent several years fronting James Cotton's Band. Sunday on the Main Stage opens with the legendary gospel group, The Highway QCs. This Gospel Quartet was sort of the junior Soul Stirrers and members years ago included Sam Cooke, Johnny Taylor and Low Rawls. Up next on the main stage is Vanesse Thomas, who is the terrific blues and rhythm singing daughter of Rufus Thomas. Victor Wainright and the Wild Roots brings this rocking keyboard wizard to the main stage and he is followed by the terrific soul-blues Blues Music Award winning vocalist John Nemeth. Closing the Main stage will be Alligator recording artists, Lil Ed & the Blues Imperials, who will bring their exuberant house rocking slide-guitar blues.

Sunday, the Tent Stage will have performances from Alvin 'Youngblood' Hart, The Peterson Brothers and Mikey Junior. Alvin 'Youngblood' Hart emerged over two decades ago laying down traditional Delta and Texas blues which has expanded to include a wide range of material, making him a 21st Century songster in the manner of a Leadbelly. He has been called a musical love child of Howlin' Wolf and Link Wray. The Peterson Brothers are youthful blues prodigies that show that blues can still inspire youth and have shared stages with Pinetop Perkins, Willie Smith, Michael Burks and Marcia Ball. their website notes they are recording a debut album. Hart and they will play two sets before Mikey Junior closes the Tent Stage.

Once again, the festival sports a superb line-up of blues. Split Rock offers lodging as well as serves as the Festival site. there are a number of other accommodations available near the Festival site. Information on tickets and lodging can be accessed at the Festival's website, http://www.pennsylvaniabluesfestival.com/.  (all photos by and © Ron Weinstock).