2010-0723 Pocono Blues Day 1-145, originally uploaded by NoVARon.
I must confess a certain disappointment to listening to one of Jimmy 'Duck' Holmes CDs when he was being presented as carrying on the Bentonia, Mississippi blues tradition best known throw the brilliant music of Skip James. James was one of those singular musician and by presenting Holmes as a member of the James' school is a disservice to him as he inevitably suffers in comparison. Yet, I found his set of simply,played from the heart solo blues at the Pocono Festival quite enjoyable. Some tunes that became part of the blues repertoire and one fellow attendee seemed to suggest a Hill Country influence, but in this day of mass media and the internet, the persistence of localized traditions seems long gone. But just like I enjoyed Eddie Cusic's blues before, Holmes was a fine traditional bluesman who I just may have to check out his most recent CD.
Posted by Ron W at 9:36 AM No comments: 2007 Pocono Blues -822, originally uploaded by NoVARon.
This picture from the 2007 Pocono Blues Festival was the last time I saw singer and guitarist Phillip Walker, who passed away today July 22, 2010 at the age of 73.

Delta Groove, the last label he recorded with sent out the following brief obituary:

"Born February 11, 1937 near Lake Charles, Louisiana, in the small town of Welsh, Phillip Walker's earliest musical influences came via the Cajun and Creole rhythms he heard as a youngster. A second cousin to Clarence "Gatemouth" Brown and huge admirer of T-Bone Walker, Phillip began making a name for himself in the early 1950s with his first recording session backing pianist Roscoe Gordon. At the age of 16, Walker left home to tour with Zydeco king Clifton Chenier (who incidentally gave the young fledgling Walker his first bona fide guitar) and never looked back.

After relocating to Los Angeles in 1959, Walker cut his first side as a bandleader; the storming "Hello My Darling", produced by J.R. Fulbright for Elko Records. His first full length album didn't appear until much later though. With the help of long-time supporter and producer Bruce Bromberg, Walker cut the excellent LP "The Bottom of the Top" in 1973 for Hugh Hefner's short-lived Playboy label. Over the next three decades Walker's musical career continued to pick up steam with numerous recording projects for HighTone, Black Top, Rounder, JSP and Alligator Records.

I (Ron) have been a fan since the Playboy Album that was produced by Bruce Bromberg. Highlight's included the rock and roll of "Hello My Darling," a down home country rendition of Lightnin' Hopkins' "Hello Central," and a terrific gritty rendition of Sam Cooke's "Laughing & Clownin'. Bromberg produced a number of his best recordings, some appearing on Rounder with "Tough As I Want to Be" being a particular favorite of mine. Bromberg also united him with swamp blues legend Lonesome Sundown for another album, "From LA to L.A." He was also part of the "Lone Star Shootout" with fellow Gulf Coast blues masters Lonnie Brooks and Long John Hunter. Walker also did a fair amount of session work for Bromberg, most notably on excellent recordings by Johnny Shines and Eddie Taylor as well as other sessions with legends like Percy Mayfield.

I was fortunate enough to have known this gentleman and true blues master whose moody, grainy performances were in the same vein as the late vocalist Al King and the great Lowell Fulson. What a fine person who should have been a household name. May his music live on forever.
Posted by Ron W at 6:39 PM No comments: 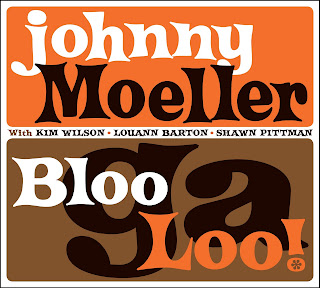 Johnny Moeller may be best known as guitarist with The Fabulous Thunderbirds, but this Dallas Texas area native has been turning heads with his raw, soul-funk blues guitar playing that comes across as a wild blend of Freddie King, Jimmy Nolan, John Lee Hooker and Frankie Lee Sims. Having an eclectic taste (the title of one of his early recordings was a homage to an Ohio Players recording “Funky Worm), he has shown this on his prior recordings. Now Severn Records has issued his latest recording as a leader album, BlooGaLoo. Severn has used his guitar playing on many of recent recordings by Darrell Nulisch, Lou pride and Steve Guyger. “BlooGaLoo” was recorded over four years and includes some originals along with covers. The backing band is Matt Farrell’s keyboards, Steve Gomes on bass and Rob Stupka on drums with appearances by Shawn Pittman, Kim Wilson and Lou Ann Barton on vocals (Wilson on harp too), along with horns, background vocals, hollering and percussion.

The opening track opens with a Jimmy Nolan-ish riff before turning into an instrumental that could have been an unreleased Freddie King instrumental with plenty of funky, nasty guitar. Pittman handles the vocal for the funky, “I’m Movin’ On Up,” with a chugging rhythm before Pittman encourages the number one guitar player in the land with some searing playing. Moeller may not be a great singer, but he certainly puts plenty into his vocal on Earl KIng’s “Trick Bag,” with a hyper kinetic rhythm section and imagination use of a tape loop of a baby and taking a hot, brief break. Matt Farrell’s organ is really strong here as well as lends it a greasy flavor. Kim Wilson handles the vocal on the racing shuffle rendition of Jesse Anderson’s “I Got a Feelin’,” with Wilson playing some Sonny Boy Williamson-ish harp and Moeller rocks out on his break. Lou Ann Barton adds her voice behind Moeller on a nice funky duet, “I’m Stuck on you,” and takes the lead on the slow blue ballad “Everybody’s Got to Cry Sometime,’ where Moeller rips off single note runs that creates tension with the emphatic slow-drag rhythm here. “Theme From the One-Armed Swordsman,” is a moody instrumental with plenty of hard chords mixed with single note bursts against a walking tempo. Wilson takes a nice vocal, Wilson telling his woman he is leaving her on the uptempo the shuffle “Well Goodbye Baby,” with another hot solo. “Shufflin’ Along,” is a medium tempo-ed guitar rocker followed by the surprising closing performance, a strong cover of an early John Lee Hooker recording, “Teasin’ Baby,” where he certainly evokes the great, early solo boogies recorded by the late great bluesman six decades ago.

Fans of raunchy blues guitar mixed with heavy doses of funk, and rock’n’roll will certainly find this latest effort by Johnny Moeller much to their taste. He certainly has shown himself as a distinctive, and strong guitarist as a sideman, and this release will certainly enhance that reputation and add to the fact he is a credible vocalist. 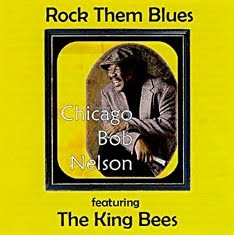 Born in Louisiana, Bob Nelson grew up in a musical family and remembers his father taking him to barbecues and fish fries where he was exposed to blues, cajun and zydeco. Taking up harp at the age of 8, he would later be tutored by Slim Harpo and Lazy Lester who along with Jimmy Reed and the two Sonny Boy Williamsons are his main influences. He spent his summers with an aunt in Chicago and met most of the great blues legends playing there in the 1960s. Muddy Waters gave him his nickname ”Chicago Bob.” He toured with Luther “Snake” johnson, and John Lee Hooker as well as performing on his own. In recent years he moved to Atlanta where he has been based. In the 1990s he recorded for KingSnake, Ichiban and HighTone, and now Roy Roberts’ Rock House Records has issued “Rock Them Blues,” backed by the North Carolina band, The King Bees. This is apparently a recording from several years ago that is at last being issued.

The music here is pretty straight forward. Nelson sings without any annoying mannerism, suggesting James Cotton at times. He may not be among the harp virtuosos, but his direct, simple crying attack enhances the overall performances. The King Bees provides restrained, solid, backing for Nelson. The opening “Locksmith Blues,” is an original where Bob’s baby has a locksmith change her lock for free but the part that hurt was him keeping a key, while poor Bob has to knock on his own door. Quit Me Baby,” originally down by the late Silas Hogan, is one of several swamp blues covered here and is a nice easy going shuffle, and followed by a restrained rendition of Sonny Boy Williamson’s “Too Close Together.” Roscoe Shelton’s “Think It Over,” is a particularly fine performance with a first-rate vocal and notable playing from Champ Young’s organ and Hound Dog Rob Baskerville’s guitar here. At the same time, Penny “Queen Bee” Zamgani’s bass and Russ Wilson’s drum, provides the welcome, understated foundation. Another Silas Hogan tune, “Goin’ in the Valley,” is a terrific swamp blues performance by everyone, with fine harp in the manner of Hogan’s harp player, Whispering Smith. The title track, a Nelson original, has some of this same lazy swamp blues flavor. Again one can’t underestimate the importance of the King Bees playing to the success here because it is so easy to overplay such material. “Comin’ Back Strong,” mixes the swamp blues with a dash of Muddy Waters, while there is an appealing cover of Slim Harpo’s wistful, “Dream Girl.” “Juke Joint,” is a down home, if occasionally messy, rendition of Little Walter’s “Juke.”

“Rock The Blues,” shows Chicago Bob Nelson to be a genial, engaging blues performer who is heard on a very entertaining release with a number of very strong performances. It can be purchased through Rock House Records website, http://rockhouserecords.com/index.html.

For purposes of FTC regulations, I received a review copy of this CD from a member of the King Bees.