Musical Notes from the Internet.

Here are a couple of interesting recent blogs that merit sharing.

A fascinating chat with Henry Threadgill

An intriguing interview with Henry Threadgill on the web blog New Music Box. http://tinyurl.com/Henry-Threadgill-interview. I find it interesting he does not own a computer. Here is a quote from Frank J. Oliveri about him, “If you’re not paying careful enough attention, Henry Threadgill might seem like he’s full of contradictions. While he is an avatar of musical progress, he disdains a great deal of technology. He prefers LPs to CDs. And forget about mp3s; Threadgill proudly refuses to own a computer and to this day there’s no henrythreadgill.com. In fact, he’s most comfortable chatting while drinking a coffee at DiRobertis Caffe, an old Italian bakery and café that has been a fixture of his East Village neighborhood since 1904. So that’s where we spoke.”

There is plenty of discussion on music in general, AACM, founding of Air, being a multi-instrumentalist, writing for an orchestra, and inventing an instrument. Here is just a brief excerpt as Threadgill discussed the hubcaphone.

FJO: What is the hubcaphone? I have some ideas after hearing recordings of it, but I'd love for you explain it.

HT: It's a set of pitched and unpitched hubcaps. They're eight hubcaps strung and hung and played in a percussion style. Almost like a large set of vibes or marimba. They lay flat, and they're all classic hubcaps because that's the only material that has any kind of a good quality sound. Because you know everything from the '60s on is basically trash. In the '60s they were still making things in America that were of quality, but by the end of the '60s, America was on its way downhill in terms of making anything of quality. Radios. Hubcaps. I don't care what it is.

It is interesting that Mosaic has just issued a box set of Threadgill’s recordings with Air, Novus and other labels now under Sony’s ownership. There is also a wonderful box of the recordings of the Black Saint albums including Air, New Air and more recent recordings. 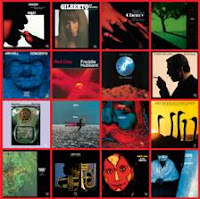 Creed Taylor’s CTI label was a pioneering label as far as its recording and presentation of jazz. In some respects, CTI was sort of a precursor to smooth jazz, but that certainly understates the range of the music produced on the label. Taylor’s productions of Jimmy Smith and Wes Montgomery for Verve certainly were a glimpse of what was ahead, but Taylor produced much music that stands up today such as Freddie Hubbard’s Red Clay and Stanley Turrentine’s Sugar.

Marc Myers on his Jazz Wax blog (jazzwax.com) ran a couple of blog entries discussing the new releases of CTI material to celebrate the 40th Anniversary of the release of the first CTI releases. On September 30, he posted his first entry, A Tale of Two CTI's (Part 1), which discussed Sony’s ambitious reissue plays that includes a 4CD box set and many reissues. But, he says “the box set's recordings simply don't sound as vibrant or as distinctive as they should—despite claims in promotional materials that the label remastered the original two-track analog CTI masters.

I’m sure that Sony remastered the material. The problem is the label for some strange reason didn't do as good a job as it has done recently for other jazz artists who were part of the Columbia fold. I know this because I just spent the past week listening to 20 different CTI releases from King Records in Japan and have compared them with Sony's set. The King's CDs are far and away superior in detail and warmth.”

Interesting how the Japanese record company does a better job or remastering that the US based Sony reissues. What did Henry Threadgill say about the quality of US made goods? You can Marc’s blog as well as his discussion of specific King Records CTI reissues which was presented on October 1 in A Tale of Two CTIs (Part 2) and mentions the availability. Be aware that the Japanese imports are not cheap, costing over $40 per CD and I am not sure if the differences can be detected by those of use who listen through our computer or ipod and through headphones. Marc Myers explains his audio set-up but i would think listening to these through a decent set of headphones would show differences. His discussion of audio issues is well worth considering.

I have received a sampler from the 4CD box from the publicist for the release and the music certainly has travelled the decades well. But I do not know what I am not hearing that i could be.
Posted by Ron W at 10:05 AM