The life and legacy of Mississippi John Hurt explored 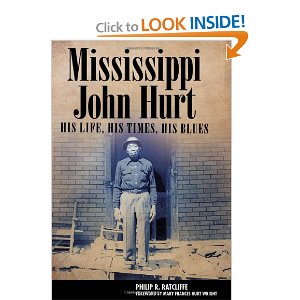 Since I first learned about Philip Radcliffe's biography of folk-blues icon, Mississippi John Hurt, I have been awaiting its publication. It has been released and will certainly be welcome for its providing so much detail around the life of this gentle, yet so accomplished a performer as well his impact upon so many, even felt today. The background of his family and ancestors is provided (including the surprising information that his ancestors were once slaves of ancestors of Arizona Senator John McLain.

Making use of census and other data, Radcliffe presents much objective information about the world that John Hurt grew up, his occupation and how he learned to play music in. He details the famous trip to New York where he recorded for Okeh records and his life after returning back to the Avalon area living in the segregated state and then the story how Tom Hoskins found Hurt and brought him to the Washington DC area, and how he became a major star on the folk and emerging blues circuit for three brief years. It should bebe noted that Hoskins located Hurt in Mississippi contemporaneously with the violent segregationist response to civil rights.

Radcliffe details how Hoskins located Hurt and includes material from Hoskins' archive which included photographs of Hurt in his community before he was went north, Hoskins own recollections as well as the recall of those who were involved such as Mike Stewart and Dick Spottsword. Hoskins himself has been subject to attacks over the years. Radcliffe depicts him as perhaps irresponsible but one who cared deeply about Hurt.

When Hurt signed a management contract with Music Research Incorporated, we learn that it was Hurt who insisted that the Manager get paid 50% of gross compensation, because he would not have seen any extra money but for Tom's help. Hoskins himself had suggested Hurt receive 90%. While Tom received 50%, his friends insisted he spent most of his share helping Tom and his family. I note this because he details some of the other business arrangements as well as an overview of Hurt's travels and performances and the aftermath after Hurt's passing when he discusses the various litigation about unauthorized recordings and litigation between Hurt's estate and Hoskins, making extensive use of court materials. It also discusses his legacy and the establishment of the Mississippi John Hurt Museum and annual festival.

There is plenty of new information uncovered here. Radcliffe interviewed many of the folks involved in Hurt's brief period of musical celebrity as well as had access to Hoskins' notes and a two hour tape of Hurt recorded when Hoskins travelled to Mississippi and located him. One shortcoming of this book is that while he discusses Hurt's performances and some of the reactions of folks like Patrick Sky and Jerry Ricks, he does not bring Hurt's music and performances to life. In an overview of the Library of Congress recordings he notes that perhaps Hurt showed a little rust 35 years after recording for Okeh.