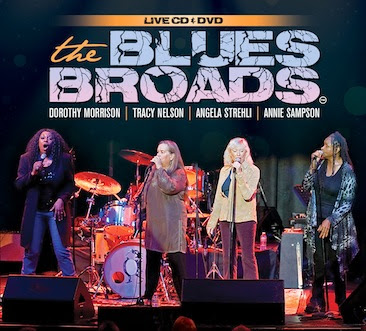 The Blues Broads is a musical revue that brings together four strong voices together with a tight backing band that began as a collaboration between Tracy Nelson who would join Angela Strehli on West Coast gigs. Later they added various vocalists for an annual BBQ event, "The Blues Broads" before Dorothy Morrison (best known for "Oh Happy Day" as part of the Edwin Hawkins Singers) and Annie Sampson (of a Bay area band Stoneground) became part of what was now a regular group that took the name of the BBQ Event.

Delta Groove has just issued a eponymously titled CD/DVD package of The Blues Broads, recorded and filmed live at the 142 Throckmorton Theatre in Mill Valley California. They are backed by a band that includes Steve Ehrmann on bass, Paul Revelli on drums, Gary Vogensen on drums and Mike Emerson on keyboards. Deanna Bogart is a special guest on keyboards, saxophone and vocals. The CD has ten songs which are all on the DVD along with Annie Sampson singing Bob Dylan's It's All Over Now/ Baby Blue. The sequencing of the songs differs on the DVD from the CD.

There are some singing marvelous singing to be heard and seen here. Several songs allow the ladies to share verses such as the Tracy Nelson and Gary Nicholson penned Livin' The Blues,' which opens both the performances up. The material mixes blues, classic R&B, and some contemporary blues-rooted roots. Tracy Nelson's vocal on Oliver Sain's Walk Away, is simply a great performance full of both with subtlety and power. Annie Sampson certainly has people take notice of her on Bring Me Your Love, but even more so on her fervent re-imagination of Dylan's It's All Over Now/ Baby Blue.

Strehli's Two Bit Texas Town, is a tough performance that has remember how she used to listen to Jimmy Reed, Muddy Waters and more growing up in her two-bit Texas town. Deanna Bogart gets showcased on It Won't Be Long, which is a centerpiece of her live shows. Its brave of Dorothy Morrison to cover Tina Turner on River Deep, Mountain High, and its an enjoyable performance but doesn't really grab the listener or viewer as does the closing gospel numbers Jesus, I'll Never Forget, and Oh Happy Day, with her taking everyone to the Church on this closing performance.

This must have been quite an event for those who attended the performance where this was recorded/filmed. The filming is pretty straight-forward with little if any of distracting gimmicks some others might have inserted. While there perhaps only are a few exceptional performances, the level of the performances still is quite high and certainly this will rightfully appeal to a wide range of listeners who simply enjoy good music.

I received a review copy from the record label.  One can see a clip of The Blues Broads in performance at http://thebluesbroads.com.
Posted by Ron W at 12:05 AM