Candye Kane Is Coming Out Swingin’ 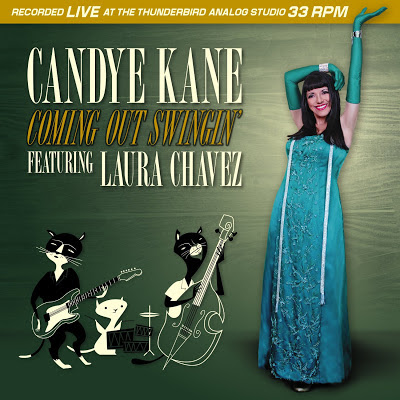 Candye Kane has a new album Coming Out Swingin’ on VizzTone that stands out in an already substantial catalog of music she has produced. Some have may regarded her as a novelty when she made her first recordings years ago, but she long ago established herself with her personality voice and heart. This latest album features her soul mate Laura Chavez on guitar and co-writer on most of the songs along with a terrific band that includes the rhythm section of Fred Rautmann on drums and Kennan Shaw on bass along with Leo Dombecki on organ, Sue Palmer on piano, Johnny Viau on saxophone, April West on trombone and Billy Watson on harmonica. Laura Chavez and her former husband Thomas Yearsley produced this and Yearsley adds some acoustic bass on some songs.

With drummer Rautmann doing a credible evoking of Gene Krupa’s drumming on Sing, Sing, Sing,  Ms. Kane launches into the title cut, an exhilarating jump blues with terrific horn playing and slashing guitar from Ms. Chavez who is exceptional throughout this recording. The repertoire is varied allowing Ms. Kane to show herself equally able at handling a ballad (Rick Estrin’s What Love Can Do) as belting out the title track. Chavez adds a rockabilly tinge to the rocking reworking of Benny Carter’s Rock Me To Sleep, while Kane and Chavez demonstrate their ability to write witty songs I’m The Reason You Drink along with one of the most remarkable lyrics I have heard in a long time, Invisible Woman. This latter songs contrasts wealthy and celebrity women that might grace a cover of a tabloid or be on a television reality show to those who are not thin or young or rich enough to be worshipped. These are invisible woman that everybody looks through. The stark simplicity and directness of the lyrics contributes to the potency of this remarkable performance.

I have had the pleasure to see Candye Kane perform several times and always been impressed by her warmth as a person as well as the powerfulness of her music which has grown with her experience as a performer. This is heard in Coming Out Swingin’, which is an extraordinary recording by a remarkable singer and performer.

I received this from the VizzTone.  Here is a clip of the terrific Candye Kane and Band.