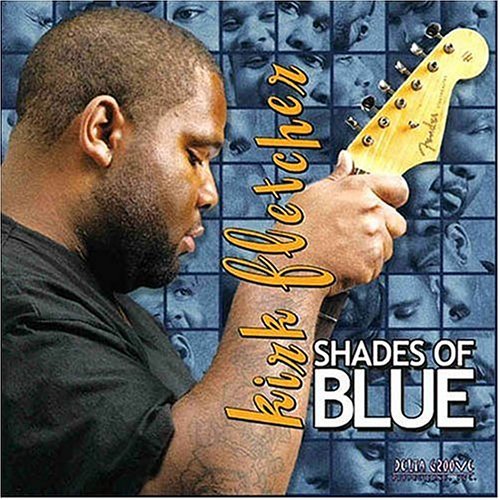 Looking back several years, here is a review of guitarist Kirk Fletcher’s second album, Shades of Blue, which was also issued by Delta Groove shortly thereafter. This review originally appeared in the April 2004 DC Blues Calendar, and just calling folks attention to a very talented guitarist and a really enjoyable blues album. Last year I reviewed his most recent album as a leader, My Turn. I purchased this I believe.

Kirk Fletcher is a young African-American guitarist from Southern California who has been mentored by some of the best West Coast blues musicians such as Junior Watson and Al Blake and has toured with Kim Wilson (with whom he has recorded) and Charlie Musselwhite. One might call him an old school guitarist as their is little if any of post-Hendrix blues-rock flavoring in his music. It is straight ahead driving blues guitar.

His second album, Shades of Blue, is on the German Crosscut label and spotlights his inventive playing on several instrumentals and as he backs vocalists Kim Wilson, Janiva Magness and Finis Tasby. Magness, a young West Coast female is one of the more promising of the emerging female blues vocalist and Tasby is one of the few singers that catch the grit and soul of the late Lowell Fulson. He really is a solid accompanist, and his sharp, biting lines embellish but not overwhelm the vocals. Highpoints include his accompaniments to Wilson’s vocals on Lonesome Sundown’s My Home is a Prison, and the classic Junior Parker (I am guessing) Stranded; Magness’ thoughtful take on Magic Sam’s That’s Why I’m Crying and Tasby’s reworking of Jimmy Dawkins’ Welfare Blues, where Fletcher really takes off on his solo. There is also an nice Tasby rendition of Percy Mayfield’s The River’s Invitation. Instrumental showcases include Club Zanzibar that Fletcher co-wrote with Wilson and the opening Blues For Boo Boo, with its nice easy groove.
Posted by Ron W at 12:05 AM