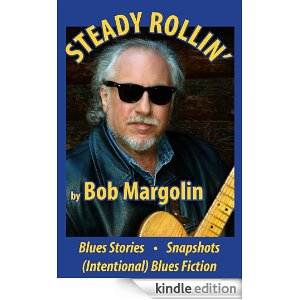 Blues singer-guitarist Bob Margolin has self-published an e-book, Steady Rollin’ (Vizz-Tone) compiled mostly from pieces he has contributed to Blues Revue. Margolin, is best known for his tenure playing guitar with Muddy Waters but as a performer in his own right has continued to perform in the basic style of the legendary Waters.
This e-book opens with a brief explanation of why and how he came to put this volume together. Included are reflections on turning 60, a short illustrated autobiography that traces his early days playing in a rock band: joining Luther Johnson, Jr.; and then joining Muddy Waters; his tenure with Muddy and his post Muddy Waters period which includes his recording career under his own name. There is a separate chapter where he focuses more on his time with Muddy and what he learned from playing with the blues giant.
Another chapter, entitled The Guitar Hero Conspiracy where he talks his view of music as a music collaboration, not a competition and provides stories he heard from blues legends and his own experiences while also acknowledging that others have a different view. He recalls the time he travelled with Muddy and Pinetop Perkins to be part of the final performances of “The Band” that was captured for the film, The Last Waltz. His recollections include some revelations of what went on backstage among some old hippies.
Bob considers the stays of the blues today and who is carrying on the traditional blues as well his experiences playing with the new breed of women blues artists. Touching is his farewell to Pinetop Perkins after Pinetop passed away. This comes from one who had four decades playing with the piano blues master. He also includes some short blues fiction that allows him to make points about the blues and the old school of the music. In one story, Bob to take his digs at today’s airlines as he tells the story of one Mississippi Slim who is not allowed to take his guitar on the plane and what then happens to Slim and his guitar.
Bob also included a number of photographs that he has taken over the years. I will not claim this is an essential book on the blues, but certainly I can’t see anyone who has enjoyed Bob Margolin perform, had a chance to meet him or just likes to read about the blues not enjoying this. I know I did. purchased Steady Rollin’ on Apple’s ibooks, but I believe it is also available from Amazon and Barnes and Noble for the Kindle and Nook respectively.
Posted by Ron W at 12:05 AM