The Bass Clarinet of Jason Stein Tells The Story This Time 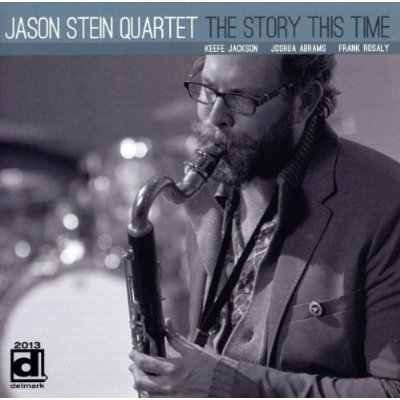 After starting on rock and blues guitar, Jason Stein has focused his musical career on the bass clarinet. In this respect he differs from a variety of multi-instrumentalists such as Bernie Maupin, Eric Dolphy, James Carter and David Murray who have made major statements on the instrument, but not play it exclusively. His Chicago quartet is heard on his Delmark release, The Story This Time, and includes Keefe Jackson who plays mainly tenor saxophone but also doubles on contrabass clarinet here, bassist Joshua Abrams and drummer Frank Rosaly. Jackson’s use of the contrabass clarinet also serves to provide a deep bottom on the selections he employs it on.
The eleven performances here include five originals along with three compositions from the Lennie Tristano school and three from Thelonious Monk. The choice of compositions from Tristano along with Warne Marsh and Lee Konitz are reflected in his interaction with Jackson throughout. Their playing is akin to the interplay of Konitz and Marsh on Tristano’s classic oeuvre and provides a feeling of the suspension of time, although the two generally eschew the tonal purity of the Konitz-Marsh front lines. 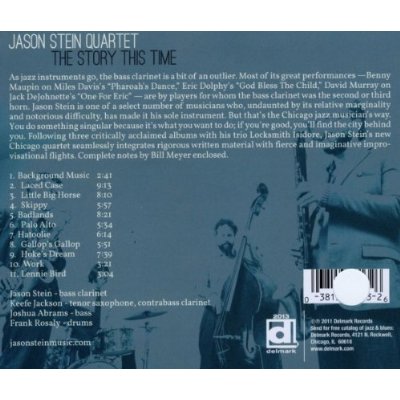 Marsh’s Background Music opens this with some heat and bebop flavor as Stein quickly displays a strong attack followed by Jackson’s hot tenor as the two weave in and out of each other’s lines while the rhythm keeps the tempo heated. It is followed by Stein’s, Laced Case, which suggests free jazz in the vein of Ornette Coleman. The two play in a bluesy vein as the rhythm embellish Stein’s growls and then provide provide a base for the swinging groove of by the leader and Jackson. There is a lively opening to Stein’s Little Big Horse, which makes use of the contrast in pitches and tonalities between tenor sax and bass clarinet. The three interpretations of Monk’s music also provides an interesting rhythmic approach. Unlike Steve Lacy’s explorations of Monk’s music which were quite close to Monk’s conceptions of his songs, Stein and his band provide a rhythmic feel that I suggest is akin to the Tristano school with its rhythmic static-ness as on Skippy.
This overview of several of the performances hopefully will give a sense of the performances on this. Some might describe this as free jazz, but that may refer to the looser musical structures they build their improvisations and with few exceptions do not relate to frenzied or frenetic playing (although the two reeds sound a bit abrasive at the beginning of Konitz’s Palo Alto), and certainly will not sound too out for those who have listened to a broad spectrum of contemporary jazz. Stein has put together a fine band for the musical explorations heard on this very absorbing recording.