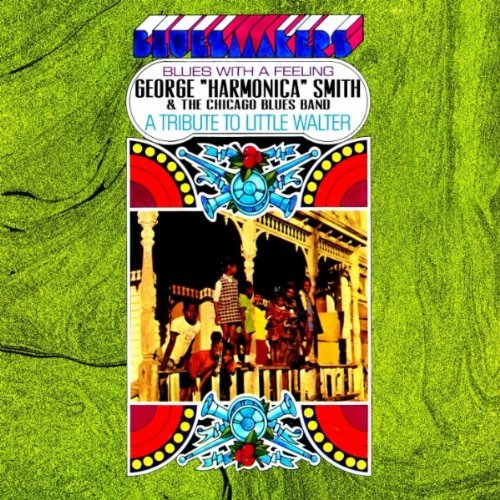 An import reissue of the late George ‘Harmonica’ Smith’s first album, Blues With A Feeling - A Tribute To Little Walter (BGO) is welcome both for lovers of blues harmonica and the late blues giant. Smith was at the time in one of his stints with the Muddy Waters Band who back him as “The Chicago Blues Band” on a collection of performances that mostly derived from the recordings of the great little Walter Jacobs. The Muddy Waters Band of this time included Otis Spann on piano, Muddy Waters and Luther Johnson on guitar, Little Sonny Wimberly on bass and S.P. Leary on drums. On most of this recording they were also joined by Marshall Hooks, a guitarist who gigged with Smith and recorded with him on Smith’s singles for various Los Angeles based labels.

Of the original eleven selections, only West Helena Woman was not associated with Little Walter, who had died months prior to this recording. It had been a song Smith had recorded several times prior, but like the other performances here was a stunning sample of the classic Chicago blues sound. From the opening moments of Mellow Down Easy, this is classic Chicago blues as represented by the Waters Band. Spann is brilliant in support (listen to his accompaniment on Can’t Hold Out Much Longer while Smith sings and plays in a robust manner. His full-bodied tone on this perhaps is not as clean as Walter was on his best recordings, but had a sharpness to it. Another outstanding selection is the reworking of Last Night, which is a stunning slow blues performance that stands up well to Walter’s original.

Not included on the original vinyl album release (which I purchased when it was originally issued) is a terrific rendition of Goin’ Down Slow, with some stinging guitar fills and a brief break by Muddy Waters. Another bonus selection is Little Walter’s Just a Feelin’. The album closes with an excellent vocal by Lucille Spann, Love With a Feelin’. Smith sits out on this selection which like the music on the Smith recording has some of the feel of Otis Spann’s Bluesway album The Bottom of the Blues that the Muddy Waters Band played on and which Lucille sang on some selections.

The original Pete Welding album notes are included along with new notes by Tony Russell which includes an interview from Steve LaVere who produced the LP with Welding about how the session came about. Russell adds perspective on how this release was received at the time and Smith’s subsequent recording career. Sound is quite good and this reissue of some classic Chicago blues is overdue and quite welcome.

I purchased this CD. Here is a little video of George 'Harmonica' Smith performing.