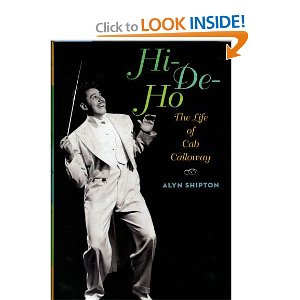 British jazz critic and historian Alyn Shipton has authored a marvelous biography, "Hi-De-Ho: The Life of Cab Calloway," that should lead to a reevaluation of the remarkable career of a person who most only will know from his iconic personality. Some will only know Calloway from his performance of "Minnie the Moocher," in the movie "The Blues Brothers," while others will remember him from his performances on Broadway and others will have heard some of his recordings and think of him as a popular vocalist.

Shipton traces his early years in Rochester and Baltimore, to Chicago where he was influenced by his older sister Blanche, through his linking up with the Alabamians who would become the Missourians and eventually his Orchestra. He gets engagements at the mob-connected Connie's Inn and the Cotton Club, and linked with Irving Mills, also Duke Ellington's manager at the time, and with Mills connections and these performances develops into a pioneering scat singer (second perhaps to Armstrong) while leading a disciplined and terrific jazz big band that had excellent musicians and soloists in addition to his remarkable singing.

There is the discussion of the many musicians who were part of the Calloway Band such as Ben Webster, Milt Hinton, Danny Barker, Doc Cheatham, Jonah Jones, Dizzy Gillespie and Chu Berry and how Calloway was constantly improving the band, trying to get strong sections as well as soloists. It is interesting that after Chu Berry replaced Ben Webster, instrumental features for the band become much more frequent and Cab featured a small band within his Orchestra as well. And the stories of life on the road and the friction sometimes between Cab and members of his band, such as the infamous incident when he accused Dizzy Gillespie of throwing spitballs and Dizzy coming after him with a knife.

And the body of recordings that Calloway produced over his life is examined in the context of his career as Shipton recounts the tours, his appearances in film (including the Betty Boop cartoons and the unique process that was used to animate his dancing style (that Shipton observes presages Michael Jackson's "Moon Walk'). Shipton takes us through his remarkable early recording of "St. Louis Blues," that was far removed from Louis Armstrong's big band recording, to the immortal "Minnie the Moocher," and the musical elements that were so original here and in its various sequels. Shipton discusses the music clearly and cogently without the use of detailed technical musical analysis so this book will be of interest to general readers.

Calloway, like his other contemporaries, suffered from the decline of the big bands but Shipton details how he started working with small groups, and then how his performance as "Sportin' Life" in a revival of Porgy & Bess re-established him as a leading performer and entertainer as well as on other productions such as the All Balck cast of "Hello Dolly," as well in the touring cast of "Bubbling Brown Sugar." I did not remember he was a featured performer on The Ed Sullivan Show for one of the broadcasts that also featured The Beatles. It was a rich musical life that continued until shortly before he passed away.

Shipton discusses the stresses of leading the band with its substantial touring inflicted on Calloway's personal life. How he had a lengthy estranged relationship with his first wife, and how hiss second wife forced him to give up his race track gambling habit while he tried to do his best as a father to his children.

I received my review copy of this book as a reviewer for Amazon.Com’s Vine Program and I initially posted this review on amazon.com.
Posted by Ron W at 12:07 AM