Vocalist Lisa Hearns Has It Bad and Sounds So Good 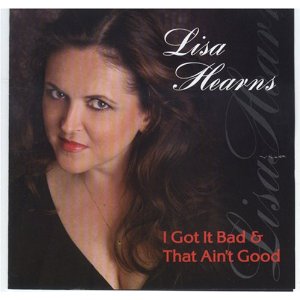 Born in Massachusetts, and a graduate of Boston’s Berklee College of Music, vocalist Lisa Hearns has established herself in the New York City area as a jazz vocalist of considerable note. On her album “I Got it Bad & That Ain’t Good” (Quicksilver), she is backed by a trio of pianist Keith Ingham, bassist Kelly Friesen and drummer Arnold Wise, with guitarist Howard Arlen guesting on four of the ten songs and Friesen handling all of the arrangements.

The title track is a well known Duke Ellington classic and with the neat arrangement, the listener is easily enthralled by Ms Hearn’s lovely voice and phrasing. At a time when some Billy Holiday soundalikes get noticed, Hearns takes “Easy Living,” and makes the song as much as her own with Howard Arlen adding a nice acoustic guitar solo. Again she has such a lovely voice but also her sense of time and her phrasing is refreshing. The Motown classic “I Heard It Through the Grapevine,” opens with her softly singing the vocal backed by Friesen’s bass transforming the song into a indigo-laced lament.

Friesen’s arrangement refreshes Irving Berlin’s “Cheek to Cheek,” with a sprite tempo and a nice solo from Ingham and she cleanly negotiates the tempo changes placed in the arrangement. Cole Porter’s “Love For Sale,” has a bluesy tinge in her vocal here while the blues is even more pronounced on the Horace Silver-Leonard Feather blue-ballad “Lonely Woman,” while her delivery on the bossa nova, “Wild is Love,” is equally delightful. After another enchanting swinger, “On the Street Where You Live,” she closes with the classic lament “Cry Me a River,” again taking a familiar song and placing her own stamp on it.

“Cry Me a River” concludes a superb release that hopefully will introduce many to a marvelous singer with a lovely voice, matched by her clean intonation, phrasing and feeling that she brings to a collection of well known songs yet she makes them sound new. This is available on cdbaby and itunes and hopefully soon at better stores.

This review appeared originally in the April 2009 Jazz & Blues Report (issue 315) and I have made minor edits.

I either received a review copy from a publicist for release or from Jazz & Blues Report
Posted by Ron W at 12:06 AM