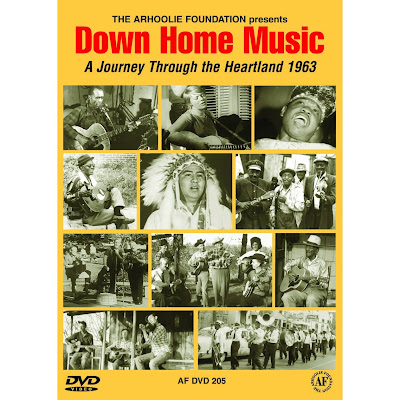 Arhoolie Records is celebrating its 50th Anniversary. It was a time when a California school teacher Chris Strachwitz went and met a British jazz and blues writer, Paul Oliver and toured part of the US and recorded and interviewed a number of primarily blues performers. A release in 1960 by Mance Lipscomb would launch the label which has produced albums of an incredible range of music. A book and 4 CD set “Hear Me Howling!” has been issued to celebrate this but their are other items to note as well.

In 1963, Strachwitz accompanied a German filmmaker, Dietrich Wawzyn, on a journey across the United States that resulted in three films for German television on blues, gospel and country music. The original negatives for those films have been lost, but with the surviving film and the assistance of the editing of Ingrid Tank, the Arhoolie Foundation presents “Down Home Music: A Journey Through the Heartland 1963.” As Strachwitz observes in his commentary track which one can listen to, the present DVD-film is more akin to his own memories of the 1963 journey than the three genre films produced. Also noted is that Wawzyn had a great interest in jazz and with the exception of the New Orleans jazz presented, apparently did not see get to film much jazz. This DVD has approximately 75 minutes of music from a variety of traditions that includes many amazing moments.

There is certainly some magic here to be seen. The film opens with the music of Jesse Fuller who then is seen entering a door (which Strachwitz advises us was Fuller’s home) and then getting behind the fotdella (a foot pedal bass), picking up a 12-string guitar and adding a rack with a harmonica and kazoo launching into a rousing “San Francisco Bay Blues,” with the camera work displaying his feet moving the pedals to play the bass as he adds harmonica and kazoo to the accompaniment of what has become a classic folk song. Its followed by a skittle band and the great folk singer Barbara Dane backed by a jug band and then a performance of Lowell Fulson in a Fillmore area club (with the night club audience scenes from another filming edited adroitly by Ms. Tank). Some powerful gospel music is presented with the fervent congregation of King Louis H. Narcisse, and the Arizona Pentecostal fervor of Louis Overstreet (on the streets and in church) as well as Brother Davis and a tent revival. There is an Indian conjunto trio presented as well as the traditional Navaho sounds of El Lee Natay.

Some of the most remarkable footage for blues fans follows next. Mance Lipscomb, Lightnin’ Sam Hopkins, and Black Ace are filmed on the porch, in their yard or living room. Their is a frustrating short live club clip of legendary steel guitarist Hop Wilson who Strachwitz in his commentary admits he did not think much of at the time but is regarded as a blues legend today. This little bit of video of Wilson may cause some jaws to drop (I remember the first time I saw a clip of Charlie Parker and Dizzy Gillespie on Joe Franklin’s New York City tv show. Then its followed by a terrific clip of pianist Whistlin’ Alex Moore pounding out some barrelhouse piano and whistling fiercely.

From then we travel to Louisiana for a terrific cajun two-step by Shorty LeBlanc, Jay Stutes and the Sugar Bees and gospel by Willie Thomas and family. The then recently opened Preservation Hall is the scene of the George Lewis Quartet with Sweet Emma playing and singing about not giving any of her jelly roll away while Lewis’ two selections include his marvelous “Burgundy Blues.” The filming is marvelous in capturing the personality of The Bell Girl as well as the warmth and soulful bluesy feel of the New Orleans clarinetist. Also filmed was the Eureka Brass Band coming to and from a video. This is priceless because this was the classic brass band. The American Music albums of the Eureka Brass Band are invaluable for those interested in this aspect of New Orleans music.

The remainder of the DVD is primarily devoted to traditional country music by the likes of The Hodges Brothers and J.E. Mainier’s Mountainers, but also includes some film from a Red Sovine Nashville recording session and the Western sound of The Willis Brothers with an amusing fiddle playing routine. Interspersed with this is some lively, archaic African-American string band blues and hokum from Blind James Campbell.

Those interested in American vernacular music will find “Down Home Music: A Journey Through the Heartland 1963,” a fascinating video glimpse at traditions that still move us today. I would suggest watching it and then way=tching it a second time with the optional audio track featuring off-the-cuff commentary by Chris Strachwitz. This is available at a variety of sources including www.bluebeatmusic.com, but you may want to check it out at Arhoolie Records own website, www.arhoolie.com.

I will be reviewing ”Hear Me Howling!” in a few days. That like this was a purchase.
Posted by Ron W at 12:11 AM