The Country Side of Watermelon Slim 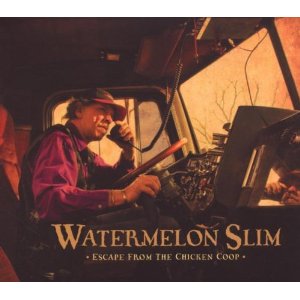 Watermelon Slim has emerged as a hot act in the blues and roots music realm. This is the final of three reviews I have written of his recordings from the past few years.  Reviews have been posted on this blog on December 5 of his eponymously titled 2006 release, and December 12 for No Paid Holidays. The following review of Escape From the Chicken Coop appeared in the September 2009 Jazz & Blues Report (issue 320).
Watermelon Slim’s gritty blues-based music has never been totally containable within any specific musical genre, so its not surprising that his latest disc, “Escape From the Chicken Coop,” (Northern Blues), is labeled a country disc. Recorded in Nashville, their may be a bit more twang here and a bit of country joint piano from Kevin McKendree (of Delbert McClinton’s band), but Slim’s raspy vocals and driving slide guitar is a cousin to that of the Duane Allman influenced playing that is sported in some country groups today.
He wrote some songs with Gary Nicholson (who also plays on most of this) such as the nice country duet with Jenny Littleton “You See Me Like I See You,” while he unplugs for his whiskey-voiced delivery of Ray Acuff’s “Wreck on the Highway.” The opening driving “Caterpillar Whine,” would not be out of place of one of Slim’s ‘blues’ albums. “Friends on the Porch,” is a short spoken narrative before “Should Have Done More,” which sounds like a modern country reworking of an old English ballad. “Hank Williams You Wrote My Life,” has an effective lyric and a hard edge to the performance while “American Wives,” is evocative of some of Waylon Jennings recordings.
“Escape From the Chicken Coop,” makes for an easy listening and should appeal to fans of Watermelon Slim who shows a natural affinity for the material here as he does for his more blues-based stuff.
The review copies of this CD were provided by the record label, a publicist for the label or performer.
Posted by Ron W at 12:09 AM