Anthony Geraci Why Did You Have To Go 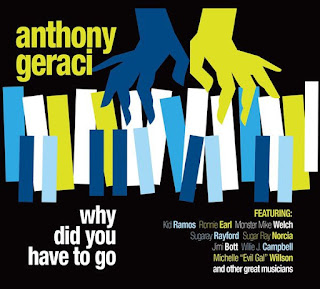 Anthony Geraci
Why Did You Have To Go
Shining Stone Records

Geraci wrote all thirteen of the songs and they cover a variety of tempos and styles starting with the opening "Why Did You Have To Go" wonderfully sung by Norcia with some terrific Texas to West Coast slashing guitar from Welch. It is followed by a hot shuffle, "Don't the Grass Look Greener," with some shattering guitar from Kid Ramos along with a hot Rayford vocal. Ramos takes the lead on the Chicago blues shuffle groove of "Fly on the Wall." Willie J. Laws handles the vocal on a song that sounds like an unissued Johnny Young number while Ramos plays more in a traditional Chicago vein and Geraci superbly channels Otis Spann This number contrasts with the late night feel of "Angelina, Angelina," where Rayford pleads vocal about his woman leaving him stranded at the Courthouse door. "Long Way Home" has a New Orleans groove with horns adding punch  (Woolverton soars on his trumpet solo), while Geraci plays solid Crescent City styled piano.

"Two Steps Away From The Blues" sounds like a classic 50s Texas urban blues wonderfully sung by Michelle Wilson, while more Chicago styled blues can be heard in "Time's Running Out," with Norcia singing wonderfully and Ronnie Earl taking the lead guitar solo. "Baptized in the River Yazoo," is a delightful down-home Willie Laws vocal backed solely by Geraci's superb backing. Dennis Brennan, while not bad, is perhaps the less striking singer on this recording, although the backing he receives on "Too Many Bad Decisions" is excellent. "What About Me" is a nicely done vocal duet between Michelle Wilson and Brian Templeton.

After Geraci channels Spann again behind a first-rate Norcia vocal on "My Last Goodbye," (with more sterling Ronnie Earl guitar), this album closes with his jazzy instrumental "A Minor Affair," a swinging cool number with Woolverton plays with a nice middle-range tone, followed by a driving solo from Gordon. There is so much to enjoy on this recording from the fresh, varied material from Geraci, his own consistently strong playing, a solid studio band and terrific singing and playing. "Why Did You Have To Go" is superb.

I received my review copy from a publicist. Here is Anthony Geraci live.