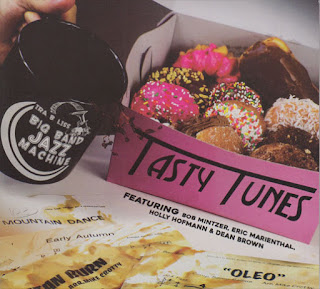 Wow. A fixture in the Southern California scene for 38 years, when this Big Band kicks off with a volcanic "You Don't Know What Love Is," one simply goes along for the equivalent of a Formula One ride with this Big Bad Band with Eric Richards' heated arrangement, a full speed ahead alto sax solo from Christopher Hollyday, and blistering trumpet from Peter Green, before pianist Steve Sibley's reflective piano break. Pianist Sibley leads a terrific rhythm section with bassist Lance Jeppersen, guitarist Alex Ciavarelli, drummer Charlie McGhee and percussionist Mark Lamson.

I am not going to recite all the players in this superb band but simply highlight some of the high-points on this exceptional recording. Guest Eric Marienthal's alto sax is featured on Woody Herman-Ralph Burns composition "Early Autumn," which starts sedately before altering into a more heated tempo that displays Marienthal's fluid, bop-rooted playing that is framed by Tom Kubis' brassy arrangement. The band's vocalist, Janet Hammer, provides a nice treatment of "I Didn't Know What Time It Was," followed the strutting "When the Lady Dances." Composer Bob Mintzer (another guest here) takes a full-bodied tenor sax solo followed by Sibley's piano and Ciavarelli's fluid guitar.

Mike Crotty's arrangement of Sonny Rollins' "Oleo," kicked off by drummer McGhee, is a feature for the saxophone section each of whom takes a chorus or two. Baritone saxophonist Ross Rizzo, Jr., stands out among these exceptional players. They also trade fours at the end. Both Janet Hammer's vocal on "Nature Boy" and Holly Hofmann's alto flute solo are enlivened by Carl Murr's arrangement. Ciavarelli's jazz-rock guitar set the mood on "Manhattan Burns" with Peter Green's fiery, high register trumpet followed by similarly hot guitar. Dave Grusin's ebullient "Mountain Dance," opens with sparkling piano, muted trumpets and flute. David Castel De Oro sets a festive tone before there is a jaunty guitar solo that is full of dazzling single note runs.

Ira B. Liss has one high energy big band marked by superior ensemble and solo playing and wonderfully crafted arrangements resulting in an album of exhilarating and compelling performances.

I received my review copy from a publicist. This review originally appeared in the March-April 2018  Jazz & Blues Report (Issue 377) although I have made some stylistic changes to that review. Here is a clip of the band from several years ago with Janet Hammer singing a song most associated with Etta James with Eric Marienthal adding his sax.