Can Blue Boys Play the Whites

Dylann DeAnna is the force behind a very fine website bluescritic.com. Recently he wrote a review of Steven Seagal’s CD which some US blues publications seem to be genuflecting about as if it was a significant blues recording. Well Dylann’s review observed “"(Seagal’s CD) is honestly as good as half the Blues/Rock/whiteboyblues CDs on the market right now (but that ain't saying much)."

This led to an email that objected to the review ”The person that wrote this article is obviously a very prejudice ignorant (expletive) mother-(expletive) toward white man not "boy" blues. That was the first thing that pissed me off. We don't like being called boy, just like you don't like being called boy. Well let me tell you something you prejudice (expletive)-wipe. The white blues players are the ones that's keeping your music alive. Hell If it wasn't for us the blues would have been dead long ago. You should be on your knees thanking us for that. But my guess is that your the type of black that would ban whites from playing blues if you could. Remember Stevie Ray !! Huh ! Do ya!! he's the one that brought the blues back to the fore front.“

I think the email reveals more about the prejudices of the sender. Dylann’s astute response to this can be read at http://bluescritic.com/Commentary.html
Posted by Ron W at 8:04 PM No comments: 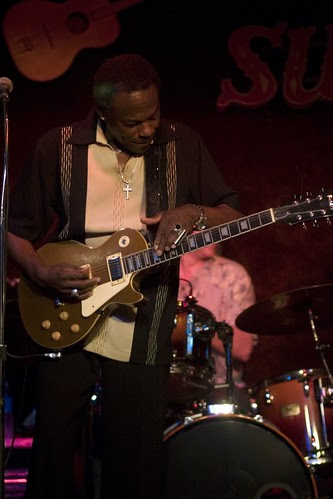 I had not seen Joe Louis Walker since the last century so the chance to see him at Chick Hall's Surf Club In Hyattsville MD just outside of Washington DC on saturday night, August 12 was a real treat. Having seen him at the Poconos two weeks earlier reminded me just how powerful a performer he was. The advantage to this show was that it was in a more intimate setting,
I reviewed for Living Blues Walker's Hightone debut album "Cold is the Night" when it came out in 1986 and have followed his career since then. He has issued over twenty albums (with a new one due soon on JSP) and I suggest nobody has put together a body of blues recordings as deep and varied as Mr. Walker.
And his live performance was one of the best shows I have seen in awhile. He remains a great singer and guitarist and has a tight band. And added trteat was DC area bluesman Linwood Taylor joining him towards the end of the second set. Wish I had taken notes but I was too busy with the camera but somehow I was thinking the lyrics of his recording "747" when he launched into it with its great line "She took a 747 'cause a Greyhound runs much too slow; There no tracks in the airt, I don't know where did my Baby go." He even played some harp, laying his guitar down and going out into the audience.
Do see him when he comes to yoru town. The blues doesn't get any better than this.