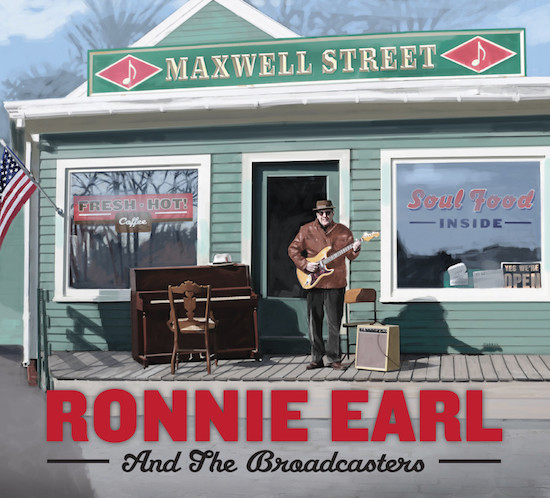 The title of the new Stony Plain album by Ronnie Earl & The Broadcasters, "Maxwell Street," is a reference to the late pianist (and former broadcaster) David Maxwell, to whose memory this recording is dedicated. Earl's guitar is joined by his band of David Limina on keyboards, Jim Mouradian on bass, Lorne Entress on drums and Diane Blue on vocals with Nicholas Tabarias appearing as a guest on guitar. This recording is split between instrumentals and vocals and provides plenty of space for Earl's guitar, but also allows Limina to showcase his piano and organ chops.

Using the word chops to describe Ronnie Earl or Limina's keyboards is perhaps inappropriate as both as musicians whose instrumental mastery is tied to a keen musical intelligence. Earl especially is a player of nuance and subtlety, with his employment of small changes in pitch, as well as his use of space recalling such blues guitar legends such as Earl Hooker, Johnny Heartsman, Clarence Holliman and Mel Brown. Listening to the spiritual feeling of the opening original "Mother Angel," and his T-Bone Walker tribute "In Memory of T-Bone," as Limina's hauntingly beautiful tribute to Maxwell ""Elegy For a Bluesman, and Earl's own "Blues For David Maxwell,” makes this evident. One also must note the responsiveness of Limina and the excellence of the rhythm section throughout.

Diane Blue has developed into an outstanding, soulful singer first heard here on the Earl-Blue original "Kismet," with its spiritual message, followed by a lengthy rendition of Otis Rush's 'Double Trouble," on which Earl again revisits one of his musical inspirations with both Limina and Earl taking lengthy solos. There is a surprising, bluesy rendition of the Gladys Knight and the Pips hit "Imagination," a nice reading of "You Don't Know Me," owing more to Ray Charles than Eddy Arnold, before the album closes with a moving rendition of the classic Peppermint Harris tune (credited to Don Robey), "As the Years Go Passing By."

Ronnie Earl, in his brief notes, comments about how deep Dave Maxwell's playing was, and that observation is true about the music here. Earl extracts so much emotion with his sublime guitar playing which touches deep into the listener's heart, and the result is the superb"Maxwell Street."


I received my review copy from a publicist. This review originally appeared in the September-October 2016 Jazz & Blues Report (Issue 368). Here is a video teaser for Maxwell Street.