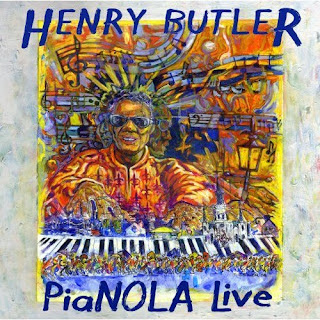 The are few musicians that I would call astonishing. New Orleans pianist Henry Butler qualifies to my ears. I remember the first recording of his that I listened to, the marvelous For All Seasons on Atlantic. Mostly backed by a trio that included David Holland on bass and Herman Jackson on drums (Steve Turre plays trombone on one track), the album generally is a strong hard bop piano set, but the highpoint is his solo rendition of W.C. Handy’s St. Louis Blues, on which his musical explorations bring a truly fresh take on this classic song. After this disc, his recordings have become less jazz-oriented and more blues-r’n’b focused.

His newest recording is PianoNOLA on Basin Street Records. Co-produced by George Winston, who produced Butler’s Orleans Inspiration, this disc is a collection of live solo performances that include several instrumentals as well his renditions of several blues and R&B classics. The strength of this recording is his piano playing especially on the marvelous renditions of Basin Street Blues, his own tour de force Orleans Inspiration, and the late Alvin Batiste’s North American Idiosyncrasies. As a vocalist, Butler sometimes come off as a bit melodramatic to these ears, but even on such a well-known number as Professor Longhair’s Tipitina, he radically reworks it in his stunning original solo and the piano and a wordless vocal part lifts up his rendition of the Ernie K-Doe classic, Mother-in-Law. While the overwrought vocal on Sitting on the Dock of the Bay, is perhaps the low point, the rollicking Let It Roll,’ (originally heard on the marvelous VU-DU-Menz album with Corey Harris) picks things up. If this reviewer finds this uneven, there is no question that there are many inspired moments throughout this disc. Maybe his wonderful Orleans Inspiration will get reissued.
Posted by Ron W at 9:30 AM 1 comment: 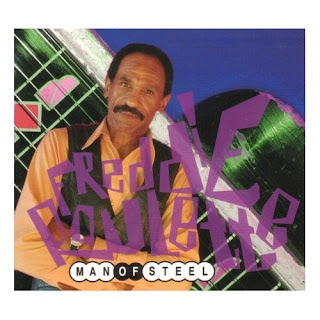 Long before Chris Strachwitz issued his first collection of Sacred Steel recordings on Arhoolie, guitarist Freddie Roulette had recorded on lap steel on a variety of recordings including Earl Hooker’s classic Arhoolie album, Two Bugs and a Roach, Big Moose Walker’s great 45, Ramblin’ Woman b/w Puppy Howl Blues, and the Chicago Blues Stars. What stood out was the vocalized quality of his playing and how his playing evoked trains, howling dogs and other sounds in a fashion that the sacred steel players and few other guitarists do today (Derek Trucks being a notable one).

Roulette has lived in the San Francisco area over three and a half decades. Back in 1997, he had a terrific album on Hi Horse, Back in Chicago, where he was backed by the late Willie Kent and his excellent band. Now guitarist Henry Kaiser has produced a new release by Roulette, Man of Steel, on the German Tradition & Moderne label. Certainly it provides enough space for Roulette to display his considerable talents, but the presence of several other guitarists, some of whom also play slide provide for what may be overall a less satisfying recording. It opens with Roulette reviving the Johnny Taylor/Albert King classic Breaking Up Somebody’s Home, with some startling playing but a lesser vocal, followed by Washington Phillips’ Tattler on which David Lindley takes the vocal lead and adds slide. Once one gets past the limited vocal by Roulette on the simple lyrics of You Got To Funkifize, one hears nice playing from Roulette but there is perhaps too much from Kaiser for these ears. With Ken Emerson providing a foundation on his lap steel, Roulette imaginatively takes lead on a refreshing reworking of Lee Morgan’s Sidewinder, before either Kaiser or Phil Emerson takes a nice solo. Roulette’s vocal comes off better on Willie Nelson’s Nightlife with his lap steel embellishments behind his vocal being a nice touch. A Hawaiian instrumental How Do Ya Do? provides nice lap steel playing from Roulette and Ken Emerson, and is followed down by a slowed down, stop-time rendition of Arthur Crudup’s That’s Allright Mama, with a nice vocal by Ken Emerson and more nice mood-enhancing playing from Roulette. Surfin’ is a nice instrumental set to a reggae groove, followed by a decent vocal on In the Heat of the Night. It is a wide-ranging set with some typically fine work by Roulette covering a variety of musical styles with some fine ensemble playing. Still this does not quite place Roulette’s electrifying guitar to the fore as the Hi Horse disc did.
Posted by Ron W at 10:29 PM 1 comment:

Are The Blues Music Awards a Fan Award

The Blues Foundation like to call the Blues Music Awards (formerly the Handy Awards) the Music's Most Prestigious Awards, yet unlike other major music awards such as the Grammies or the Country Music Awards, the Blues Music Awards are not limited to industry personal but anyone who is willing to pay the dues to be a member can vote for the BMAs. And apparently vote for their favorite performers and stuff the ballot as opposed to vote for the best recording or artist viewed in a mythical more detached manner.

Tommy Castro was winner for Entertainer of the Year as well as his disc, Painkiller, was selected Contemporary Blues Album of 2008. On his website, Castro writes (with the bolded italics added by me),

"Hey everybody,
It was a great night in Tunica, Mississippi for me and the band. I really want to thank everyone who took the time to vote for us. I say "us" because "Painkiller," of course, was a group effort. I had a lot of help. And I wouldn't be much of an entertainer without a kick-ass band behind me either. So I share these awards with everyone who had a part in the making of "Painkiller" and all those who are involved in keeping this band working and doing what we do best, which is performing live. I realize a lot of you joined The Blues Foundation so you could cast your votes. It's a fine organization and I think you will enjoy your membership.
Thanks again,
Tommy"

I do not mean to belabor the point but the notion of artist's soliciting votes raises questions of just how prestigious the BMAs really are.

BTW here is my review of Painkiller as it appeared in Spring 2007.

"The popular Tommy Castro has a new Blind Pig disc, Painkiller, that certainly appear for his pop-soul-rock-blues songs that certainly go down easy with some nice singing and playing as well as catchy pop-like songs. Song’s like Mike Schermer’s Big Sister Radio (which certainly will appeal to much of Castro’s audience) and Castro’s Goin’ Down South (with a nice Crescent City flavor to the groove on a song that would be at home on contemporary country radio) have lyrics with nice hooks and are nicely delivered by Castro who is a very good singer and guitarist, with a solid band backing him (although Castro’s sax player Keith Crosnan comes off at times like a Clarence Clemons clone) Coco Montoya guests on a nice reworking of Albert Collins’ A Good Man Is Hard to Find, with fine singing and fretwork from the two. The last number, It Ain’t Easy Being Me, David Maxwell providing a barrelhouse blues piano background behind Castro’s amiable vocal ending a varied and extremely entertaining set."

While I liked Painkiller, it did not make my list of Outstanding Blues of 2007. Click on that link for the list of 2007 blues CDs I believe are superior to Mr. castro's entry. 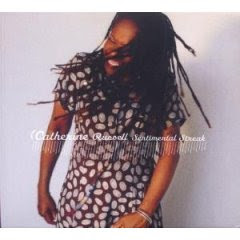 I became aware of Catherine Russell when she appeared as a backing vocalist on the wonderful Marie Knight tribute to Reverend Gary Davis. She is the daughter of the legendary bandleader, Luis Russell, and bassist-vocalist Carline Ray, and has worked with Jimmy Vivino’s Little Big Band, Steely Dan, Paul Simon, Cyndi Lauper and others.
In the 90s, her mom was subbing on bass with Doc Cheatham so she came down and later regularly saw the late trumpeter and started singing with him and the spirit of his music lives in this, her marvelous new album.
This recording is produced by Larry Campbell, who also contributes guitar, violin and mandolin to this project that showcases Ms. Russell’s marvelous way with a song. And, there is a fine collection of songs presented here for Ms. Russell, including I’ve Got That Thing, which her father wrote and recorded (it was released as by King Oliver who was ill that day); Kitchen Man, a vaudeville blues cowritten by Andy Razaf that was a staple of so many singers of that time with its double entendre-filled lyrics; Hoagy Carmichael’s New Orleans; the Wilder-McGlohon South to a Warmer Place (with Rachelle Garniez’s accordion and
Campbell’s violin evoking a French bals-musette); Nellie Lutcher’s playful You Better Watch Yourself, Bub; Willie Dixon’s I Don’t Care Who Knows (originally done by Harold Burrage for Cobra); Garniez’s Broken Nose (again with her accordion) and the sultry Harburg-Gensler Thrill Me.
Russell evokes a variety of influences including Alberta Hunter, Billy Holiday, Ivie Anderson, and Nellie Lutcher throughout this disc. I find Holiday an apt comparison as she phrases the lyric. She does not come across as a Holiday sound-alike in the manner of a Madeline Peyroux, but rather her delivery and timing is reminiscent of Lady Day, and the backing is so complimentary and sympathetic.
Many tracks eschew drummer while several tracks have horns and strings, yet never overwhelm the vocals and the lyric and one can appreciate Campbell’s marvelous mandolin solo chorus on Broken Nose as simply one of the elements that make it such as splendid performance. The acoustic bent of the performances here lend this disc a flavor of the thirties and forties cabaret scene yet everything sounds so contemporary.
This is not a campy revival of such vintage tunes like Brian Seltzer’s Louis Prima pastiches. Instead it is a compelling modern take on such material that will certainly end up on a number of Best of 2008 lists.

She is appearing at the Kennedy Center in Washington DC on May 15 as part of the Mary Lou Williams Women In Jazz Festival
Posted by Ron W at 9:23 AM No comments: