Tim Niland on his blog, Jazz & Blues Music Reviews has a very interest take on The Keepnews Collection of Jazz Reissues that Concord Music has started issuing. These are reissues of discs that Orrin Keepnews had produced and many include alternate takes and new liner notes. Keepnews himself includes some commentary that Tim does characterize as "a little self-reverential." He does raise the issue of the producer (or engineer as in the case of the many recent Rudy van Gelder reissues) receiving co-billing with the performers. "But do they deserve co-billing with the musicians on these CDs? They did not in most cases compose songs or perform on instruments, but as a result of their longevity they are honored as if they were performers." More provokingly he comments, "Keepnews and Van Gelder certainly deserve their place in jazz history, but giving them equal billing with the musicians on classic albums seems a little bit much." This is concise and thought-provoking.
Here is a link to this specific blog entry, Revisionist History
Posted by Ron W at 7:51 PM No comments:

Photographic Blog on Jazz 101 on Sale

A really wonderful and thought provoking writer on photgraphy (and a terrific photographer himself) Mike Johnston recently had a nice entry of the itunes Jazz 101 on Sale on his blog, theonlinephotographer. It includes some interesting discussion as well. Mike's blog entry - Riches in Store. Given that these are priced below what itunes usually charges, there are some gems you cannot go wrong with.

One interesting quote: "A Love Supreme is many peoples' first Coltrane record, which is unfortunate because it then becomes their last. Not that it's not a great record, but it should be peoples' eighth or tenth Coltrane CD, and their 200th jazz recording rather than their second*.)"
Posted by Ron W at 7:41 PM No comments:

A recent visit to the website of Sonny Rollins revealed that he has available for download four selections from a 1965 performance at London's Ronnie Scott club.

An email I received from Bret Primack, who is webmaster for sonnyrollins.com, noted:

"When Sonny appeared at Ronnie Scott's for one month in January of 1965, he was secretly recorded by someone in the audience.

"Those tapes have been shared by collectors globally, but last year they were released, without Sonny's permission, by a London based record label. All efforts to contact the label have proven fruitless, so instead, Sonny decided to release the music himself.

"Although these tracks are not digitally recorded, they do offer documentation of truly remarkable music. Some of the performances run half an hour and capture Sonny live in a way he's rarely heard on recordings."

In upcoming months additional tracks will be made available for download.
Posted by Ron W at 8:54 PM No comments:

THE DYING CRAPSHOOTER’S BLUES
By David Fulmer
HARCOURT 2007
Atlanta based writer David Fulmer authored three acclaimed historical mysteries involving the Creole of Color detective Valentin St. Cyr set in New Orleans at the beginning of the 20th Century, and among the characters were such legendary jazz pioneers as Buddy Bolden and Jelly Roll Morton. Fulmer’s writing was atmospheric as well as thrilling as he skillfully weaved together the actual mystery against a background of Storyville and its musicians, madams, streetwalkers and associated characters.

Fulmer’s latest novel, The Dying Crapshooter’s Blues takes us to Atlanta of the mid-twenties and is inspired by the Blind Willie McTell song that the book takes its title from. McTell told Edward Rhodes, who recorded him in 1956, that the song was based on the shooting of Jesse Williams, a gambler that was shot on Courtland Street; and after McTell took him home, sick from the shot, he requested that McTell play the song over his grave.

From this simple premise, Fulmer weaves together the killing of Little Jesse Williams and a heist of a cache of jewels from a mansion of one of Atlanta’s leading citizens into a compelling story anchored around the efforts of Joe Rose, a rambler, gambler and thief, to find out why Little Jesse was shot and who stole the cache of jewels and how can they get returned. The dying Little Jesse and Blind Willie, who composes the song (as the story unfolds) both press Rose, a former policeman and Pinkerton, to help find out why Little Jesse was shot, even though the gambler does not help by not talking about what happened.

A black-hearted, power-hungry police officer, “The Captain,” who did not receive his expected promotion with the election of a new Mayor, presses Rose on solving the jewel heist with threats to him and the beauty Pearl Spencer if he isn’t successful. With more bodies turning up, Fulmer also weaves in Columbia Records coming to Atlanta and a fictional recreation of Blind Willie McTell’s first recording session. This book has the same virtues of the Valentin St. Cyr novels and I found this easy reading which did get compelling. I had to finish this before I went to sleep.

Even more so than the St. Cyr books, Fulmer weaves the musical threads as an indispensable element of the narrative as a whole, and if Blind Willie McTell is a secondarycharacter here (to Joe Rose), Fulmer presents us with a fictional McTell that comes across as a real person as opposed to say the highly mythologized romanticism of say Robert Johnson that has appeared in some blues fiction in which Johnson is a character.

If you want a good mystery, read and love jazz and blues, you won’t go wrong with David Fulmer, especially this excellent novel. 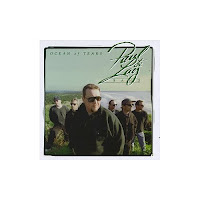 Word has been filtering to the blues community that the multi-talented Paul deLay passed away from Leukemia. deLay had performed last weekend, and went into a Portland Hospital on Sunday when what was thought to be acute bronchitis turned out to be acute, end term Leukemia. On Tuesday he fell into a coma and died Wednesday, March 7.

deLay was a innovative blues harmonica player who incorporated jazz influences into his style. While a virtuouso, hi playing demonstrated a subtlety in his solos that eschewed simple crowd pleasing gimmicks. He also was a strong songwriter and vocalist with a soulful sound. He was also backed by a terrific band.

In the earlier part of his career, substance abuse hampered his career. After serving time for drug trafficking, he cleaned up and his career was rejuvenated producing several excellent albums including Ocean of Tears and Heavy Rotation for Evidence. I had the pleasure to hear him perform and meet him and he was a fabulous artist as well as a wonderful person. He will be missed.
Posted by Ron W at 5:02 PM No comments:

Word arrived over a month later that Rev. Solomon Charles "Crown Prince" Waterford passed away at the age of 90 on February 1. The Oklahoma City native began a recording career (I believe with Jay McShann) and recorded for Capital, Mercury and King Records and composed over thirty blues compositions. A terrific shouter in the vein of Walter Brown and Jimmy Witherspoon his earliest recordings have been compiled on the Classics label, In more recent years he moved to the Jacksonville Florida area where he served a a minister. In 2002 he had his first recordings in decades, All Over But the Shoutin' for Cypress Records.

This info taken from his myspace page, link.

In a description of the CD by Geechie Smith & Crown Prince Waterford - Swingin KC Combos on Blue Moon on www.bluebeatmusic.com has some stuff inconsistent with the above, sayig he was born Charles, born in Jonesboro, Arkanasas and sang in bands that included Andy Kirk and the Clouds of Joy (with Charlie Christian and Abe Bolar) before beginning his career as the Crown Prince of the Blues in Chicgao during the 1940s and started recording for hy-Tone and Aladdin in addition to Capitol. Here is the pertinent link.
Posted by Ron W at 9:05 AM 3 comments: