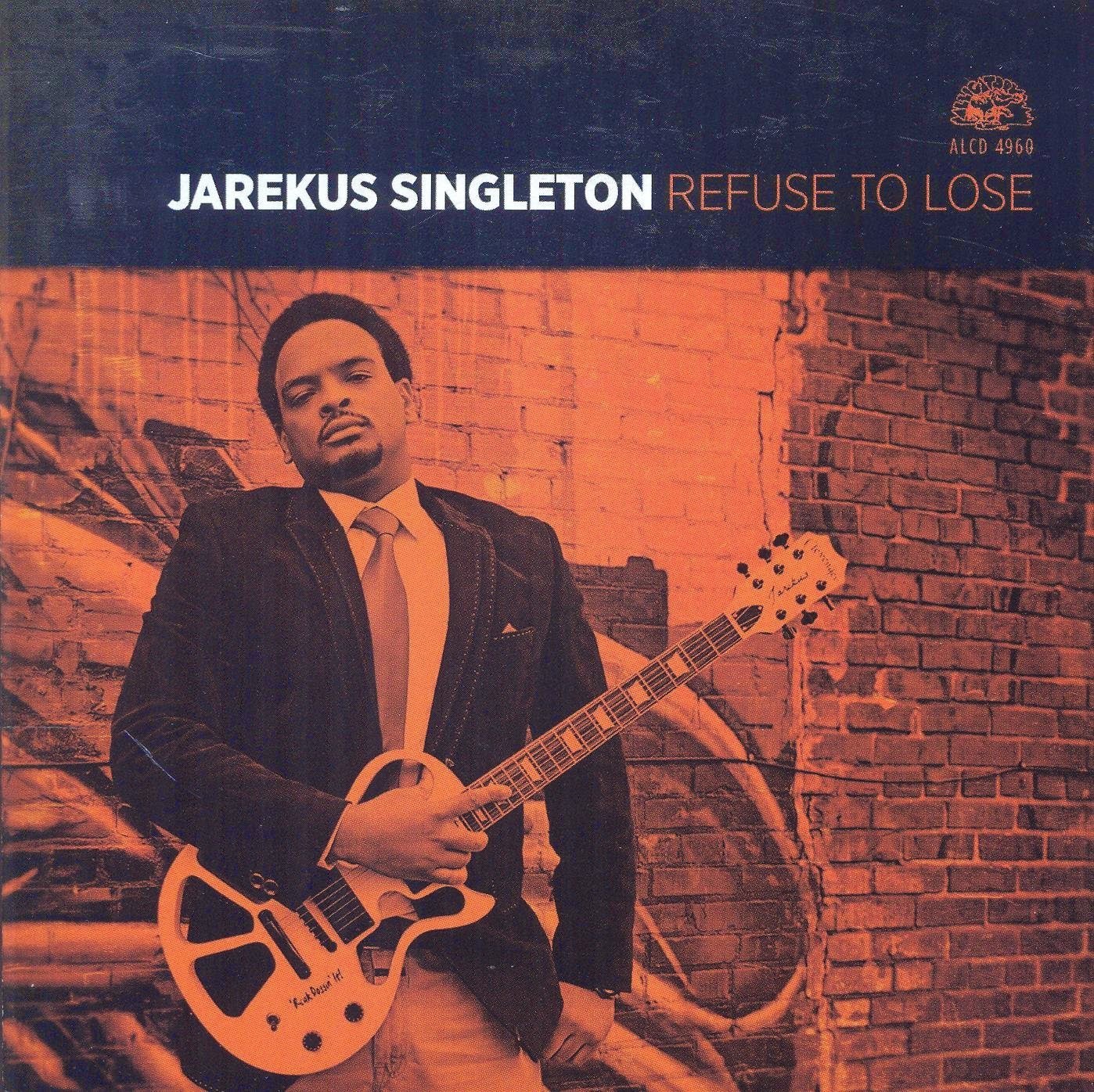 Highly heralded before he signed with Alligator, Jarekus Singleton certainly impresses on his debut for the label Refuse to Lose. The Clinton, Mississippi native turned heads with his self-produced Heartfelt, and this new album certainly will wake up many listeners with the freshness of his sound and songs. He is backed by his band of James Salone on Organ; Ben Sterling on Bass and John "Junior" Blackmon on Drums and Percussion. On one song they he is backed by Brandon Santini on Harmonica; Ben Sterling on Bass and Robert "Nighthawk" Tooms on Piano.

While his guitar playing is a bit hard rocking to my taste, there is no question his abilities or his musical imagination. His blending of blues-rock, traditional blues and soul, funk and hip hop results in a very distinctive sound. His songs are fresh and bring together the various elements together in a manner so that the music comes across as multi-faceted, not contrived. One can not praise his band enough as they handle transitions from hard rocking to more restrained sections seamlessly. The rhythm section of Sterling and Blackmon is excellent, and organist Salone stands out with both his supportive playing and solos. But the leader’s insistent playing is at the fore, and even on a shuffle type number he adds unusual, interesting twists in his playing.

Singleton is also an extremely gifted, soulful singer. His voice suggests Robert Cray (an observation that came listening to Gonna Let Go), although his delivery has more of an edge. Singleton brings so much personality to these performances that often have unusual lyrical themes. On the title track, he sings about the adversity he has overcome, underlying the drive he has to Refuse to Lose. This and Keep Pushin’, are the most personal of the songs here. On the latter number he sings about a basketball career cut short by injuries (he starred at Southern Mississippi in college), how his uncle took him to a blues club where he was bitten by the blues bug, and that has now become the life he is pursuing with his music.

Other songs perhaps have more standard themes about being mistreated such as Crime Scene which is where his lady broke his heart or Sorry, where he sings about being soft-hearted and almost feeling sorry a little bit, but when he recalls the pain she caused, he isn’t sorry a bit. This song illustrates his clever way with a phrase singing that if lying was a sport she would have a number one draft pick and a number one seed as well as imagining what she might do for a Klondike bar.

Some of my fellow blues traditionalists may find this too rocked out. After all, my initial reaction to Refuse to Lose was mixed. However, listening to this over several weeks, I now appreciate Jarekus Singelton and how stirring his music is.

I received my review copy from Alligator Records. He is appearing at the Pennsylvania Blues Festival on Sunday July 27 and I am really looking forward to his appearance. Here is a video of a recent appearance by him at the North Atlantic Blues Festival a few weeks ago. 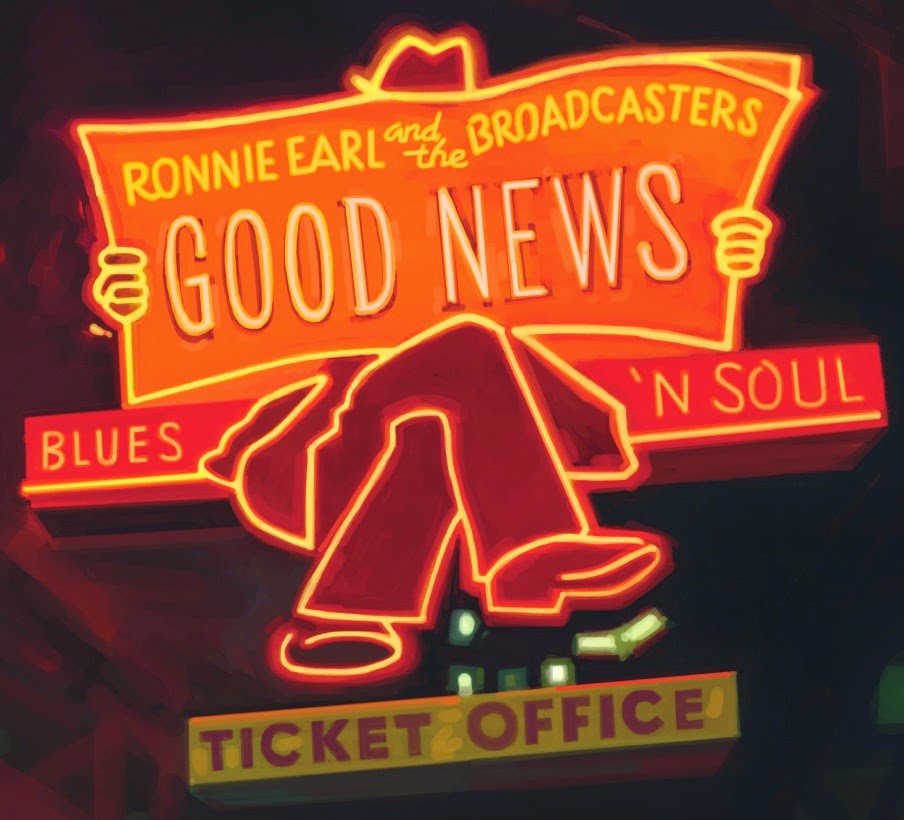 Ronnie Earl’s latest album, Good News (Stony Plain), certainly will be good news to the guitarist’s many fans. Earl is joined once again by The Broadcasters (Lorne Entress – drums, Dave Limina – keyboards and Jim Mouradian – bass), his band of over 25 years, to create a mostly instrumental CD. Also appearing is vocalist Diane Blue and guitarists Nicholas Tabarias and Zach Zunis.

As great a guitarist as Earl is, the presence of Blue’s vocals on several tracks certainly adds to the pleasures heard here. The Disc opens with the Memphis music inspired I Met Her on That Train, with some rockabilly tinged playing (a bit of Scotty Moore mixed with Floyd Murphy). Ms. Blue is on hand to sing Sam Cooke’s A Change Is Gonna Come, with Earls’ thoughtful playing and attention to tone very evident. His facility on the fretboard is matched by the clarity and restraint of his playing. Few can convey such deep feeling, as even evident on the jazzy Time To Remember, with Limina’s organ playing standing out.


Junior Wells is the source for In the Wee Wee Hours with another fine Diane Blue vocal and some playing from Earl that might suggest Buddy Guy (but with greater restraint than Guy would display today). Zach Zunis takes the first guitar solo here. It is followed by the infectious gospel-laced title track. Blues For Henry is a low-down instrumental tribute to the late Hubert Sumlin with Limina getting greasy on the organ.

The closing track, Running in Peace, has lyrics written by Ilana Katz, who was near the finish line of the Boston Marathon when the first bomb exploded on April 15, 2013, which Diane Blue movingly delivers with Earl and the Broadcasters providing a sober background as Earl really gets down and pulls out all the stops on the solo here. It is a moving end to another excellent recording by one of the leading guitarists in the blues.


I received my copy from the label (and/or publicist). This review appeared in the July-August Jazz & Blues Report (Issue 355) and may be downloaded as a pdf file at jazz-blues.com. Ronnie Earl will be performing at the Pennsylvania Blues Festival at Blue Mountain Ski Resort on Saturday July 26. Here is my preview of the Festival, http://inabluemood.blogspot.com/2014/03/pennsylvania-blues-festival-celebates.html. Here is a video to give a taste of Ronnie Earl performing. 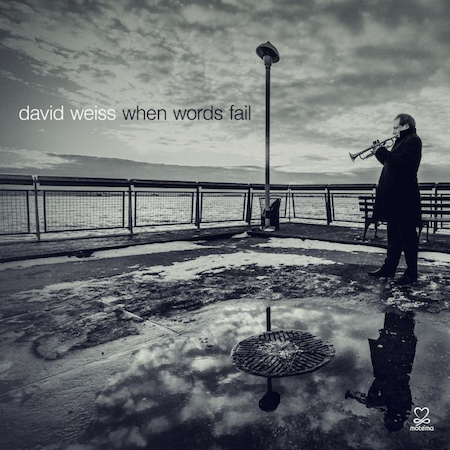 Regarding the motivation for When Words Fail, the new Motema Music CD by David Weiss and his Sextet, Weiss explains that: “[T]he last year or so has been a time of profound loss for me and a lot of my close friends and acquaintances. Some of these losses have been very public and horrific. These were the themes that were swimming through my head as I put the final touches on the music for this CD and began to rehearse it. But, ideally, it’s also about lifting one out of that world, so it should also be about rebirth, hope and finding your way back. The music on When Words Fail is about acknowledging your pain but also about finding a way out, or at the very least, providing a temporary escape. I don’t want to say that this is what I strive for or set out to do when composing, but I do hope that this is what the end result of my endeavors will encompass.”

For this album, Weiss reassembled his “original band,” The David Weiss Sextet, featuring his original band-mates (once fledgling artists themselves and now proven jazz stalwarts), Saxophonists Marcus Strickland (tenor sax) and Myron Walden (alto sax), pianist Xavier Davis, bassist Dwayne Burno, and drummer E.J. Strickland (plus guitarist Ben Eunsen making his recording debut on two tracks). Tragically these were Burno’s final recordings, as he passed away at the early age of 43, a week after these recordings were made. This album is dedicated to him.

The music here will not sound unfamiliar for those who have enjoyed Weiss' work with The Cookers or his other efforts. It suggests some of the classic Shorter and Hancock sessions for Blue Note. The compositions are fresh and interesting and the performances are terrific, starting with the sparkling The Intrepid Hub, that was written for Freddie Hubbard. Burno was impressed by the title track when they first rehearsed it and the rendition here, Weiss states, is for him with a slower tempo. Weiss takes notable solos on both. MJ evokes the classic second Miles Davis Quintet renditions of Wayne Shorter’s compositions. Marcus Strickland standing out on tenor while the leader’s tone is a bit more extroverted than Davis while guitarist Eunsen is heard adding fiery playing.

Wayward, part of an extended suite, is a feature for Walden’s fervent alto sax with E.J. Strickland energetic playing driving things along, while Davis also takes a solo. Karl Jenkins’ “Lullaby For a Lonely Child” is another sober composition that showcases Walden. The closing number, Passage Into Eternity, is dedicated to Jimmy, Nelba and Isaiah Greene whose daughter (and sister) was one of the victims of the Newtown massacre. Marcus Strickland and Weiss both stand out here, with more kudos to the terrific rhythm section. Burno was an anchor, Davis’ comping was precise and Strickland is among today’s most compelling drummers. This track concludes a terrific recording that is full of heart as well as exquisite playing.

I received my review copy from Motema Music. This review appeared in slightly different form in the July-August 2014 Jazz & Blues Report (I made some corrections). You can download the issue as a pdf file at www.jazz-blues.com by clicking on that issue (355).  Here is a video of the making of When Words Fail. 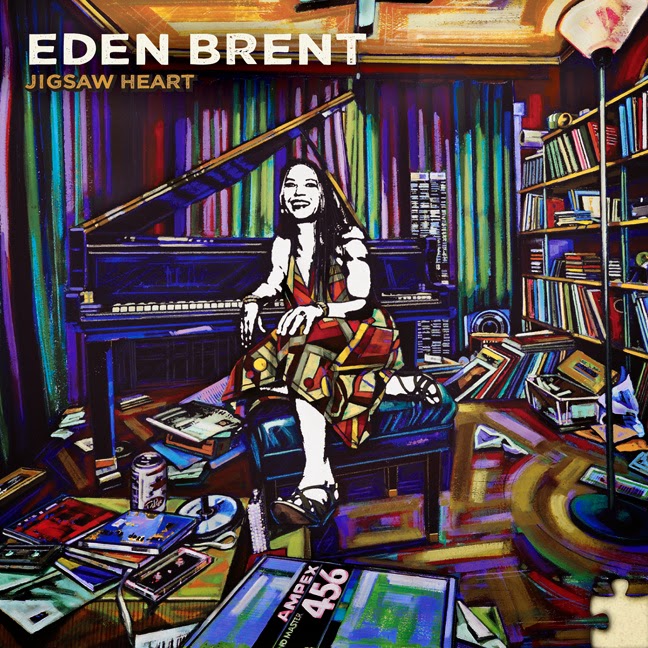 In 2008, I called Eden Brent’s album Mississippi Number One, “ is a stunning recording of blues, jazz and soul… .“ I also observed that “[a]s a singer she sings with the authority of the late Esther Phillips, if a bit less nasal, while displaying the sassiness of a Denise LaSalle and a bit of Bobby Gentry’s country soul.” I was similarly impressed by next album Ain’t Got No Troubles, noting it “mixes a marvelous pianist and vocalist with strong material, sympathetic backing and varied, imaginative programming resulting in a terrific recording that should appeal to blues and roots music fans.” Eden Brent’s latest album, Jigsaw Heart (Yellow Dog Records) is another recording that  displays perhaps more of her country side as a performer.

Like Ain’t Got No Troubles, this was produced by Colin Linden who also contributes guitar (and mandolin on one track). Some of the others playing behind Eden on this include John Dymond on bass, Gary Craig on drums, Dan Dugmore on pedal steel, Kenzie Wetz on fiddle. Brent’s originals are mixed with interpretations of songs from Joan Armatrading, Billy Taylor & Dick Dallas, and Jimmy Phillips amongst others.

The very first two numbers illustrate the range of music on Jigsaw Heart as well as the extent of Ms. Brent’s talent and artistry.Better This Way has her singing about leaving today but the relationship ended sometime before, so lets raise a glass to toast the past.. This is a classic country waltz that has a bit of a swamp pop feel as well. Everybody Already Knows in contrast is a romp about the whole town knowing Eden and her lover are messing round, with some wonderfully rollicking piano that evokes Jerry Lee Lewis (although perhaps not quite as wild). Both are superbly sung and played and display her considerable gift as a songwriter. The title tracks another wonderful lyric as she asks her cowboy angel whether he has what it takes to un-break her heart.

In addition to these wonderful originals she provides her own take on Joann Armatrading’s Opportunity, with a vocal that suggests Bobby Gentry. Another noted cover is the Billy Taylor- Dick Dallas penned I Wish I Knew How It Would Feel To Be Free, which was inspired by Nina Simone’s classic rendition of this. Its a good performance with backing singers, although I would love to hear Eden perform this just with her piano.

Jigsaw Heart is a superb recording. Eden Brent has a range as a pianist, singer and songwriter comparable to the late Charlie Rich. Like Rich she brings complete authority to renditions of blues, country and soul. I look forward to hearing more from Eden Brent and her continual musical growth.

I received my review copy from Yellow Dog Records. Here is a video of a interview and performance by Eden.