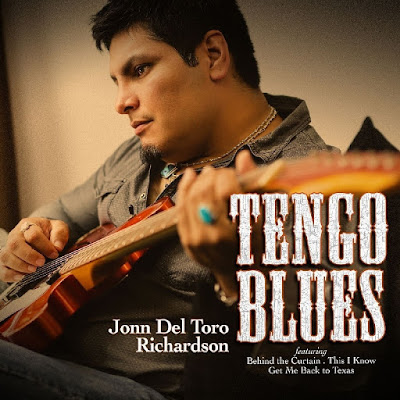 Jonn Del Toro Richardson is likely best known as guitarist with the terrific singer, Diunna Greenleaf. He also collaborated with Rich DelGrosso for a warmly received recording. "Tengo Blues" is a solid new self-produced recording by him that is distributed by VizzTone. This was recorded in Austin and produced by Jonn and Anson Funderburgh, who also plays on three selections. The band backing Jonn includes Nick Connolly on keyboards, Nathan Rowe on bass, Wes Starr on drums and the Texas Horns with Kaz Kazanoff. The leader wrote all 13 songs, with Gary Vincent and Anson Funderburgh each contributing to two songs.

Ax expected from both Del Toro Richardson's playing and the band assembled here, one has some nicely played songs that cover a variety of musical textures and flavors. He comes across as quite an appealing vocalist. A good singer, Del Toro Richardson sings honestly and with heart while laying down plenty of strong guitar. There is an almost Koko Taylor groove for "I'm Her Man," which is a celebration of his guitar as he sings he can make her laugh, cry, moan and sigh. "Love If You Want It," is not the Slim Harpo number but an original that is built on a lazy Jimmy Reed shuffle groove. "Triple Lindig" is a jazzy instrumental (very nice guitar) with Connolly on organ and horns adding to the flavor of this performance and followed by the Tex-Mex flavor of "The Moment" with the Texas Horns adding a mariachi feel along with some superb trumpet.

A Memphis funk groove is present on "Can't Run From Love," with a catchy lyric that "you don't find love, love finds you." "Get Me Back To Texas," one of the songs which Anson Funderburgh is present has a groove that evokes Hound Dog Taylor. "This I Know" is a swamp pop ballad the performance of which sounds like a Gulf Coast adaptation of a Charles Brown number and has a nicely played and paced guitar solo, while "Tell Me Pretty Baby" is updated T-Bone Walker styled jump blues with terrific guitars from both and "Wild Ride" is bluesy rock and roll with Connolly's rollicking piano coming off like Johnnie Johnson.

I received my copy from the record company. This review originally appeared in the March-April 2016  Jazz & Blues Report (Issue 365) on page 16 (you can download the issue at jazz-blues.com), although I have made a few stylistic changes from that review. Here is Jonn Jonn Del Toro Richardson in performance, and if this doesn't knock you out, I do not know what will.

The Tinner Hill Blues Festival returns to Falls Church on the weekend of June 10 through 12 with a exciting program of Blues and Gospel. Among the artists to be presented is a Friday evening show at The State Theatre with the legendary Mabel John, a full day of blues on Saturday at Cherry Hill Park with former Muddy Waters and John Lee Hooker sideman Mac Arnold and keyboard wizard Victor Wainright. On Sunday there will be an Old Fashioned Blues Gospel Concert and Picnic at the Tinner Hill Historic Site.

This entry focuses on Friday night's State Theatre Concert-A Salute To Blues Divas which in addition to Mabel John, also will present Trudy Lynn and Gaye Adegbalola and the Wild Rutz. The show starts at 8:00PM with Doors opening at 7:00 PM.

Mabel John was for many years the lead singer with the Raylettes who supported Ray Charles. She was the brother of Little Willie John and was one of the first act to have a recording on the Motown subsidiary, Tamla label. After several years with the Raylettes, she was signed to Stax where she recorded her hit "Your Good Thing Is About To End," and other songs like "Able Mabel," and "You're Taking Up Another Man's Place."  After another stint with the Raylettes, she retired from secular music although in recent years she has established herself as an actress and still appears at Festivals  (including the Smithsonian's Folklife Festival in 2011 and the 2015 Ponderosa Stomp) where she still wows audiences. It is a real coup for the Tinner Hill Blues Festival to present this musical legend.


Houston's Trudy Lynn is a big-voiced blues and soul vocalist whose career bgan in groups and clubs in Houston. In the 1960's she sang with guitarist Albert Collins and then later, Clarence Green. Her recording career began in 1989 with the Ichiban label. Her album "Trudy Sings the Blues" had riveting renditions of "Ball & Chain" and "Come To Mama." After Ichiban folded she recorded " U Don't Know What Time It Is" for Ruf Records which had Lucky Peterson's keyboards and Bernard Allison's guitar. In more recent years she was associated with the late Calvin Owens orchestra, appearing on his recordings and his Orchestra backed her for the Blues Music Award Soul-Blues Nominee "I'm Still Here." Her most recent recording is the terrific "Royal Oaks Blues Cafe" from 2014. About that recording I wrote, "The closing Whip it To A Jelly further displays how nuanced a singer Lynn is as she brings out humor and wit of Clara Smith’s lyrics, Many blue singers today would come across as emotive or heavy-handed singing this. Her ability to convincingly deliver so many shades of blues makes 'Royal Oaks Blues Café' such a terrific recording."


Many will know Gaye Adegbalola from the trio, Saffire- the Uppity Blues Women, which she was such an integral part of for several decades. With the demise of Saffire, Gaye has formed a unique vocal group, Gaye Adegbalola & the Wild Rūtz whose first recording "Is It Still Good to Ya?," has been nominated for a Blues Music Award for acoustic blues album. Her website describes the music as "In this world of screaming electrified instrumental acrobatics and digital perfectionism, this CD delights in returning to our RUTZ! It celebrates the Creator's primary instruments: THE VOICE and THE BEATS. 4 unique voices combine with percussion and occasional guitar to add a previously unrecorded dimension to the blues. All 14 songs are Gaye's originals." Along the powerful blues and soul of Trudy Lynn and Mabel John, this will make the State Theatre on June 10, a night with the Blues Divas you will not want to miss.


For more information, including ticket information, visit tinnerhill.org.
Posted by Ron W at 8:18 AM No comments: