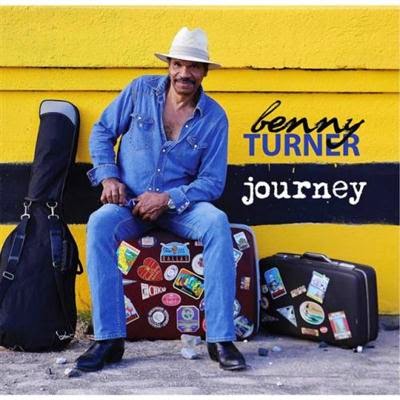 Benny Turner has has a distinguished career playing bass and anchoring the bands of his brother, the legendary Freddie King; another Chicago blues legend Mighty Joe Young, and the late Queen of New Orleans, Marva Wright (with whom this writer best knows him). Additionally he pioneered playing bass behind gospel acts and played with the likes of Dee Clark. He has just issued his third recording (the first this writer has heard) as a leader, “Journey” on Nola Blue.

One often looks beyond a sideman who may sing a couple or two opening numbers before bringing on the main act. However, from the first notes of “Breakin’ News,” one quickly becomes aware of the authority Turner brings as a vocalist, not simply a strong bass player who anchors a band. With the handsome production, solid shuffle groove, brassy horn arrangements (from Turner and saxophonist Jason Mingledorff), Marc Stone’s guitar and effective use of backing vocals he convincingly delivers his lyrics about the relationship being over and “ain’t no more crying.” The mood turns down home on “Don’t You Ride My Mule” with Sunpie Barnes adding his harp and Charles Moore rhythm guitar, while Turner’s regular drummer Jeffrey ‘Jellybean’ Alexander lays down the groove and Josh Paxton adds the keyboards here in lieu of Turner’s regular collaborator Keiko Komaki who plays on most of the recording. On other selections, Derwin “Big D” Perkins is on rhythm guitar.

Other selections display Turner’s way with a word in addition to his singing including the reflective “How I Wish” as he sits in his rocking chair wishing his woman was here with him and the topical “What’s Wrong With the World Today” that touches on issues of homelessness, violence and other matters as Turner sings that “We need love” on this closing track. Another number that should resonate is the soulful ballad “Worn Out Woman” with its theme of a woman’s work never being done, getting the kids on the bus and then dust the house. Turner even takes up the guitar and kazoo for the relaxed, down-home instrumental “My Mother’s Blues.” with twin keyboards and Alexander playing lightly on bass drum and cymbal.

The variety and strength of material, the strong work by the band and Benny Turner’s heartfelt and persuasive vocals make “Journey” a gem of a recording.

I received my review copy from a publicist. Here is Benny Turner in performance at the 2013 French Quarter Festival in new Orleans. 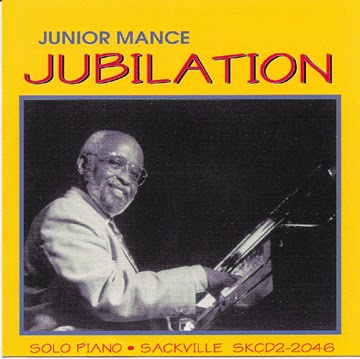 Delmark’s acquisition of the Canadian Sackville label continues to make available some wonderful recordings covering the whole spectrum of jazz. Among the latest releases to get back into circulation is a live solo piano recording from the wonderful Junior Mance, “Jubilation” (Sackville). Mance, who established himself with Dizzy Gillespie, Cannonball Adderly and the two tenor team of Eddie ‘Lockjaw’ Davis and Johnny Griffin, had been working leading his own trios and also in duos in New York from the 1960s on when he was recorded at Toronto’s The Montreal Bistro in September, 1994.

“Jubilation” was originally released in 1996 and likely will be new to most ears. In a program ranging from Hoagy Carmichael, Ellington and Strayhorn, W.C. Handy, Jerome Kern and Oscar Hammerstein, Dizzy Gillespie and Cole Porter, Mance throughout showcases his considerable and ability in mixing gospel and blues roots with florid Tatum-esque runs. The title track is a particularly exhilarating performance, but his touch and tenderness is shown on a rendition of “Georgia On My Mind.”

Mance gets playful on “Lady Be Good,” while his take on “All the Things You Are” is a high point on this exceptional release. Mance also puts his own stamp on a marvelous take of the venerable “St. Louis Blues,” as well as on “Birks Works,” while he invests a morose tone to “Lover Man.” “What Is Thing Called Love” starts in a reflective manner before Mance turns his interpretation into a stride-rooted romp. This track exhibits the wide ranging musical imagination mixed with his formidable technique making “Jubilation” such a delightful recording.

I received my review copy from Delmark. Here is Junior Mance doing "Jubilation" in 1959. 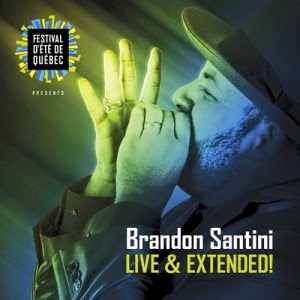 Brandon Santini has been establishing himself as one of the new blues harmonica hotshots. With his band of Timo Arthur guitar, Nick Hearn on bass and Chad Wirl on drums, the Memphis-based Santini was recorded in July 1014 performing at Le Petit Imperial de Québec as part of Festival D’été Du Québec and his rousing performance can be heard on “Live & Extended” (VizzTone).

Santini’s formidable fat, wet harmonica sound is present throughout with his no-holds barred attack. At the same time, the performances are straight blues. He may be high energy but that does not mean he has rocked out and his sense of dynamics is terrific. He has chosen intriguing covers and solid idiomatic originals. His vocals are solid and the band provides solid support whether taking us  down in the alley or rocking a nice shuffle.

From the opening moment of his hot take of James Cotton’s "One More Mile” to the closing encore number “Come On Everybody,” Brandon Santini lays down  driving harmonica blues and forceful singing. “This Time Another Year,” with its chugging rhythm and some of guitarist’s Arthur best  playing is a terrific track as he sings about maybe being in Chicago or down south in Tennessee. Then he takes down the tempo on “Elevate Me Mama” which again sports some strong harp. After the nice groove of an original “Evil Woman” we hear a fresh, rockabilly tinged reworking of Walter Horton’s “Have a Good Time.”

Other choice covers include the funky groove to recast Slim Harpo’s "Got Love If You Want It,” and Frank Frost’s “My Back Scratcher,” with its mix of a lazy groove and Santini’s extroverted vocal and harp. Then there is his hot shuffle “No Matter What I Do,” and the breakneck tempo of “I Wanna Boogie With You.” Listening to this terrific recording one gets a sense of just how exciting he is live. “Live & Extended” certainly whets this listener’s appetite to see him live.

I received my review copy from VizzTone. Here is Brandon Santini performing "Evil Woman" at another Festival.