A bit of blues video to savor

I have been a bit lazy and not posted in a few weeks. To remedy that I have a couple blues videos from you tube for you to enjoy. First is T-Bone Walker. I believe this is from the American Folk Blues Festival tours which have been made available on some fabulous DVD's put together by Reelin' In the Ear Productions.

Follow that from Robert Lockwood, Jr. doing a rendition of his stepfather's "Sweet Home Chicago." Lockwood's J.O.B. recording of "Aw Aw Baby" was one of the earlier post-war Chicago Blues versions of this song. I am not sure if this predates Roosevelt Sykes' "Sweet Old Chicago," which likely inspired Junior Parker's "Sweet Home Chicago" for Duke and which Magic Sam cited when he performed it at the Ann Arbor Blues Festival. It was not until after magic Sam's rendition before we got a plethora of recordings, some good, but way overdone. This rendition is part of the Grammy Award Winning, The Blues Shoe Project.

Finally another rendition of "Sweet Home Chicago," by Robert Johnson's travelling friend, Johnny Shines. Listening to mediocre Robert Johnson tributes by the Eric Clapton and Rory Block, I need to cleanse my ears by playing Shines whose mix of Lonnie Johnson, Howling Wolf and Robert Johnson made him, to my mind, the best interpreter of Johnson's songs. 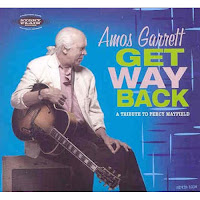 Singer-guitarist Amos Garrett latest release is, Get Way Back: A Tribute to Percy Mayfield, an affectionate tribute to the Poet Laureate of the Blues (Stoney Plain). Mayfield has long been a favorite for Garrett and his biggest influence as a singer and Garrett has chosen a nice selection of songs including My Jug and I, Stranger in My Hometown, The Country, River’s Invitation, Ha Ha in the Daytime, and “Lost Mind, among the eleven performances. He has a nice backing band which is a small scaled version of some of the bands that Mayfield recorded with for Tangerine and RCA with. Garrett’s baritone and low-key style is akin to Mayfield’s as well although perhaps it makes comparison with Mayfield harder to avoid compared with the late Johnny Adams, whose magnificent album of Mayfield compositions, Walking on a Tightrope, is arguably the definitive Mayfield tribute album. As amiable and likable as Garrett's renditions here are (and the solid restrained playing is especially praiseworthy), Garrett is simply not Mayfield’s equal (much less Adams' equal) as a vocalist, and his phrasing falls a bit short. There is much to like about this recording, and it is a good effort, but it does not entirely hit its target. sat 7 out of 10 on a ratings scale.
Posted by Ron W at 10:14 AM 1 comment: