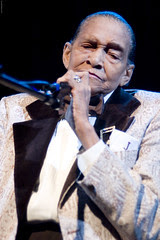 2007 Ponderosa Stomp-272
Originally uploaded by NoVARon
Finally did an initial write-up of this year's Ponderosa Stomp (The Sixth One) held on May 2 at the House of Blues in New Orleans. It is subject to some editing.

The Ponderosa Stomp is a multi-genre evening of wild rock and roll put on by the non-profit, Mystic Knights of the Mau Mau, who mission is “rediscovering and celebrating America’s overlooked musical pioneers, and re-educating the community about their impact on music.” Returning to New Orleans after being relocating to Memphis in 2006 after Hurricane Katrina, the Stomp was held at New Orleans’ House of Blues, where music was presented with performances in the main room, The Parish and HOB’s outdoor patio.

Arriving at the House of Blues at 5:30, I headed to the main stage where Lil Buck Sinegal and the Top Cats were holding forth with Lil Buck’s guitar, Stanley Dural’s B-3 and a tight three horn section. Emceeing this portion was Dallas dee-jay, soul-blues singer and songwriter, Bobby Patterson, who, after several numbers by the Top Cats, brought up Motown session guitarist and Funk Brother , Dennis Coffrey. Coffrey played several fine instrumentals including revisiting The Temptations’ “I Wish It Would Rain.” Lazy Lester followed with a set that included some of his Excello recordings including the instrumental that gave this event its name “Pondarosa Stomp,” (this is the spelling on the Excello single) and “Sugar Coated Love.” He also had a nice rendition of Merle Haggard’s “I’m a Stranger.” Lester was followed by David Batiste (of the legendary New Orleans funk band, The Gladiators, and father of drummer (David) Russell Batiste Jr.). While his set certainly had a funk core, he included some strong blues. Barbara Lynn was up next with a varied set that included her hit “"You'll Lose A Good Thing." (Herb Hardesty joined the horns for her set), and was followed by the energetic Texas rocker and blues shouter Roy Head who did his “Treat Her Right” and renditions of Bobby Bland numbers with a definite stage flair. I ventured to the Parish Stage during some of these performances and caught Eddie Kirkland (with a trio) and Henry Gray solo on the piano, giving solid, representative performances. After a short break, drummer and WWOZ announcer Bob French introduced Jimmy Scott, who was backed by piano and bass. This may have been the single finest performance of my New Orleans vacation. Scott’s was simply spellbinding, delivering a lyric in a manner suggestive of Billie Holiday in how he phrased the song. His performance was on the same time as Bobby Rush and Kenny Brown whom I heard were excellent.
After a break the main HOB stage was set up for the Wardell Querzergue New Orleans Rhythm & Blues Revue. The legendary producer and arranger, Querzergue, lost his vision several years ago and was this program was the first in several years to feature him and his arrangements. He opened with a bright, funky rendition of Smokey Johnson’s “It AIn’t My Fault.” Up next was soul-singer Tony Owens who reworked several of the recordings Querzergue had produced for Cotillion and other labels, including “Confessin’ a Feeling”, and he was followed by Robert Parker who did “Barefootin’” and a couple other songs, and Jean Knight, who sang a lively “Don’t Mess With My Toot Toot” and “Mr. Big Stuff.” During Knight's performances, Allen Toussaint played the B-3 for a couple songs. Conducting the band, Querzergue also could be seen greatly enjoying the performances. The longest stretch of this Revue featured Dave Bartholomew whose segment included a funky rendition of “The Monkey Speaks,” and some of the other classic songs he helped write and make musical history with. There was plenty of space for his trumpet to be featured along with guitarist Charles Moore and the members of the horn section including saxophonists Herb Hardesty and Amadeé Castanell.

After this revue closed I went back to the now packed Parish stage where Dale Hawkins (backed by Deke Dickerson and the Eccophonics) was winding down with “Suzy Q.” Downstairs on the mainstage I caught most of Dan Penn’s set, accompanied by his guitar and by Bobby Emmons on keyboards, which concluded with a fine “The Dark End of the Street.” It was after midnight and feeling the effects of traveling that day I left the Stomp had started at 5:30 and kept going for at least another two hours) although I saw Little Freddie King and a harmonica player on the Patio stage (King also had a set with his band), so I did not see Joe Clay, Rory Erickson, Augie Meyers, Willie Tee and Al ‘Carnival’ Johnson (who I also heard was outstanding). For those seeking an evening of straight, no chaser blues, frantic rockabilly, deep funk and southern soul with a dash of psychedelia and uptown R&B, one will find no more exhilarating concert than the Ponderosa Stomp.

If the Ponderosa Stomp was not enough, Padnos and the Mystic Krewe helped produced a free “Legends of Swamp Pop” show the following evening outside the Cabildo on Jackson Square with Little Band of Gold (C.C. Adcock, Warren Storm, Steve Riley, David Egan and others) who brought on Tommy McClain, Rod Bernard and Lazy Lester (with Roy Head also singing a few numbers) for a marvelous evening featuring this important but usually overlooked Louisiana genre.
Posted by Ron W at 8:32 PM No comments:

The current issue of American Legacy: The Magazine of African-American Music History & Culture is a special Music Issue. Included in the issue is the cover story on Sammy Davis, and stories on Florence Mills, Deford Bailey, King Oliver, and an account of the true stories behind the ballads Stagolee and Frankie & Johnny. There are also short pieces on singer Sissieretta Jones (best known as Black Patti), and james Brown and excerpts from Richard Cook's recent book on Miles Davis. A fascinating collection of articles.

Here is the link for this issue. 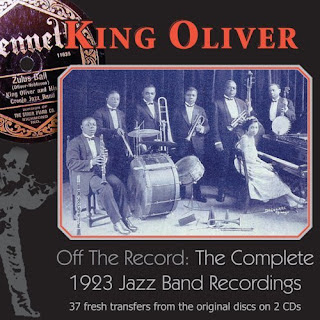 King Oliver's Creole Jazz Band stepped in a recording studio several times during 1923 and made some historical recordings. Louis Armstrong would leave his mentor a few months after the last of these recordings were made (for Paramount after recording for Gennett, Okeh and Columbia). These have been issued before (a wonderful lp on Herwin of the Gennetts and a complete cd reissue with some added Oliver tracks mastered by the late John R.T. Davies). However, the stakes have been raised and a new reissue on Off The Record (distributed by Archeophone (and available from amazon and the Louisiana Music Factory among others), King Oliver, Off The Record: The Complete 1923 Jazz Band Recordings, simply is the finest reissue of this music, bring a presence and clarity to the performances that even Mr. Davies marvelous work does not approach. Even with the limitations of the acoustic recording process, the music here sounds fresh and vibrant and really is essential to anyone interested in American vernacular music (particularly blues), not simply jazz.
Posted by Ron W at 11:18 AM No comments:

Going to New Orleans for the Ponderosa Stomp

Well I will be away for a few days as I am going to New Orleans for the annual Jazz & Heritage Festival (the 38th I believe), but as far as an appertizer goes, one cannot do much better than the annual Ponderosa Stomp, which has joined WWOZ's Piano Night and the free performances at the Louisiana Music Factory as one of the must see events for those in New Orleans during the week between the Fairground weekends. This year's line-up includes Lazy Lester, Barbara Lynn, Jimmy Scott, Roy Head, Henry Gray, Little Freddie King, Lil Buck & the Top Cats, Dave Bartholomew, Wardell Querzerque, Dan Penn, Rory Erickson and more. After a one year hiatus in Memphis, the Stomp returns to post-Katrina New Orleans with a typically ambitious line-up of blues and roots acts.

By the way, the name Ponderosa Stomp comes from a Lazy Lester instrumental on Excello of the same name. Ponderosa refers to Angola Penitentiary. It was the name the inmates had for the prison, and some folk like the late James Booker refer to it in some of their recordings (I am thinking about Booker's rendition of "Junco Partner").

Here is a link to this year's Ponderosa Stomp.