The great Texas saxophonist, Favid 'Fathead' Newman passed away Tuesday, January 20. The Highnote CD Life was the next to last recording of his distinguished career. Highnote issued Diamondhead in 2008. I previously posted a review of this album in November 2007. The review originally appeared in the July-August 2007 Jazz & Blues Report. Here is a link to that 2007 post.
Posted by Ron W at 10:04 PM No comments: 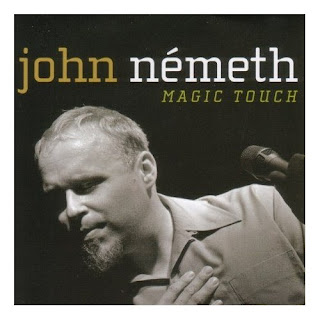 In light of John Németh's new Blind Pig release, Love Me Tonight, I thought it would be appropriate to post a review of his earlier Blind Pig disc, Magic Touch, which has been posted on Amazon.com. I wrote this in early 2007.

One of the real pleasures I have is hearing a new voice that just blows me away being rooted deep in the blues tradition, yet singing and playing with an authority that would have been at home on a blues recording 40 years ago. Born in Idaho, John Németh has been growing a body of followers including guitarist Junior Watson and Steady Rollin’ Bob Margolin and after a couple of CDs has signed with Blind Pig and has a new CD, Magic Touch, that is a stunning release. He is simply a wonderful singer that to this listener suggests Junior Parker mixed with Bobby Radcliffe and an equally superb harp player. This CD is produced by Anson Funderburgh (who plays on 1 track) with Németh backed by a terrific band that includes great Junior Watson on guitar and Kaz Kazanoff and the Texas Horns. Németh blasts off with a strong reworking of Junior Wells’ Blues Hit Big Town (great harp along with the vocal) before followed by the funky originals Blue Broadway and the title track, both sporting strong crying vocals and terrific playing from Watson (who gets into a rock and roll vein on the title track). Willie Dixon’s Sit and Cry the Blues, was one of Buddy Guy’s earliest recordings and the version here with Watson’s evocation of Ike Turner’s trebly playing on Guy’s original as Németh’s convincingly the lyrics in his natural soulful style. She Did Not Show sports some harp in a Rice Miller vein on a blues set to the Sittin’ on Top of the World/ Some Cold Rainy Day melody, while Up to No Good evokes Sam Cooke’s Bring It On Home, with more exquisite harp playing. Come On, a polka-blues (yes you read that correctly) closes this album on a fresh, delightful note. Blind Pig in their publicity for this suggests that Magic Touch “is destined to be one of the most remarked upon releases of 2007.” Well it is January as I write this, but they are likely right, as this is simply terrific and hopefully Németh will do so touring in support of this.
Posted by Ron W at 9:31 PM No comments: