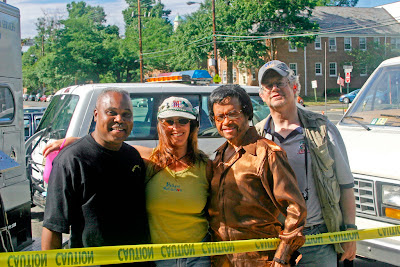 The lineup for the February 9, 2008 Benefit for Chester 'Memphis Gold' Chandler has been announced. It has some of DC's best blues performers including DC's blues legend, Bobby Parker and The Hardway Connection a band that mixes old school deep soul and blues. One of their vocalists, Jerome MacKall will scare you with his vocals that suggest Otis Redding crossed with Al Green. There is quite a variety of some of DC's most interesting blues talent for what will be a great evening of music.
The schedule, taken from the DC Blues Society's website :
7-8pm Two All-star bands including David Jackson, John V., David Cole, David Harris & Others
8:00 Sherwood Blues Band
8:30 Blues on Board
9:00 Charles “Big Daddy” Stallings
9:30 Hardway Connection
10:00 Clarence Turner & Stacy Brooks
10:30 Dr. S.O. Feelgood Band
11pm-1am Bobby Parker & Others

The benefit is from 7pm-1am
Chick Hall's Surf Club
Cover: $10

The photo is from the 2006 Columbia Pike Blues Festival and from left to right is Memphis Gold, Jazs (DC Blues Society volunteer), Bobby Parker and yours truly. 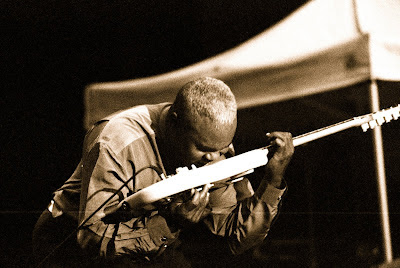 In light of Memphis Gold's recent serious injury, it is appropriate to reprint my review that originally appeared in the D.C. Blues Calendar back in the December 2004-January 2005 issue. I made a few minor corrections. I acquired an advance of this CD at his triumphant appearance at the 2004 Pocono Blues Festival which I used for a review copy.

It was gratifying seeing Memphis Gold at this past summer’s Pocono Blues Festival. Having seen Chester Chandler perform at long gone venues like Smokehouse Blue and Fleetwood's, as well as his band with Charlie Sayles with their regular gigs at JVs and being regulars when Whitlow’s on Wilson first opened, one has to admire how he and his band has matured. At the time of the festival, he gave me an advance copy of his new self-produced CD, The Prodigal Son, which is being released imminently. Comprised mostly of originals it includes his regular band with guest appearances by Phil Wiggins on harp and Pete Ragusa on drums on a track or two, and several tracks have the late Willie Hicks on them.

Anyone who has seen Memphis Gold knows how much soul he brings to his performances and his Memphis influences go beyond the late Reverend Robert Wilkins and other influences of his youth. Certainly, the Stax sound underlies some of his songs like his evocation of Don’t Make Your Move Too Soon on the opening Come Wit Me, with its funky tempo and groove. Its not surprising to see folks filling the dance floor and when he takes his guitar solo on this, it does not slow things up one bit. They avoid hurrying the tempo too much on the shuffle, Don’t Let Her Ride, which I believe was previously recorded by James Peterson, and has a nice piano solo and raw acoustic harp before Memphis Gold’s guitar takes the tune out. After the hot racetrack groove on Crabcakes, the tempo slows down for Big Leg Woman with more fluid fretwork. The title track, Prodigal Son, is not the song by his mentor, Rev. Robert Wilkins, but has a similar theme about a wondering blues man heading home set against the melody of the classic 44 Blues. Then there is an instrumental Chicken It, with a riff that suggests Howlin’ Wolf’s Killing Floor (and some nice harp), Preacher Blues, where he talks about bringing his shotgun to church with a driving solos, and the humorous bit of double entendre on Test Drive That Woman. The lengthiest track, Serves Me Right, is a terrific slow blues as pleads to his lady that he wants to come back home.

I had not listened to this in a couple months, but hearing it again I was struck how good this is. I should point out that I am among those who are thanked in the credits (reflecting my long friendship with Mr. Chester Chandler). I am just so gratified to have a friend produce probably the best local electric blues CD since Bobby Parker’s two discs for Black Top. It is that good. I am sure you will be hearing this on WPFW and you should check www.memphisgoldprod.net for information on purchasing this superb CD.

Addendum: This CD is available through cdbaby.com and has been picked up by Jim O'Neal for his Stackhouse Records which is distributing this. The James Peterson song I refer to is Don't Let the Devil Ride with the same melody and slightly different lyric

s. I do wish to reiterate what I said three years ago. This is the best local electric CD (local being the Washington DC area) since Bobby Parker's Black Top discs, and the quality is reflected by the fact that Stackhouse is now distributing it, and Memphis Gold has received rave reviews overseas and has been featured on the cover of Jefferson, the world's oldest blues periodical. If you don't have it, but it and help support my friend Memphis Gold. The DC Blues Society is putting on a benefit at Chick Hall's Surf Club on February 9, 2008. Go to www.dcblues.org for more information. 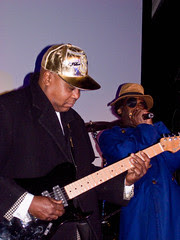 2007-1231_Falls_Church_Watch_Night-278
Originally uploaded by NoVARon
Memphis Gold performing New Years Eve in Falls Church (VA) as part of the annual Watch Night. Less than two weeks after this performance, Memphis Gold fell out of a tree while employed in a tree cleaning business and suffered serious injuries.

The DC Blues Society is holding a benefit for him on Saturday February 9 at Chick Hall's Surf Club in Bladensburg Maryland, from 7pm-1am. More information can be found at www.dcblues.org as well as on an earlier post on this blog.

Stacy Brooks, a wonderful DC area vocalist has been able to be with Memphis Gold and family in the hospital and able to post updates on his condition. On January 16 she wrote:

Memphis is on the road to recovery, he finally has a little bit of feeling in his feet. His spirits are high and we (Memphis, his wife Barbara, Nadine Rae, Clarence “The Bluesman” Turner, Memphis’ sister and myself) actually wrote a song the other day in Shock Trauma lol . I guess we made too much noise (just kidding)….because now they moved him to Kernan Hospital to begin rehabilitation. He still has a long way to go, but the doctors are calling him a miracle. I truly believe our prayers along with his strong will and determination go a long way! Well, since he is getting better he has all this idle time (which he is not used to) on his hands. If anyone can donate a laptop while he is in the hospital, it would be greatly appreciated. He will be there for a while and their desktop of course is at home. When he is not in therapy for these next 8 weeks he needs to keep his mind busy. Someone can give it to me, and I can take it to him. How convenient that they move him 5 minutes from my office."

I spoke with Stacy today and she mentioned just how vigorous the rehab is. She is also putting together a benefit series for Memphis and other musicians who suffer similar medical emergencies. Her own website is
http://www.stacysmusic.org.

She has started a separate website for the benefit and benefit series
http://memphisgoldbenefit.com. This webpage also has updates on how Memphis Gold is doing.
Posted by Ron W at 6:04 PM No comments:

Memphis Gold - A Friend in Need 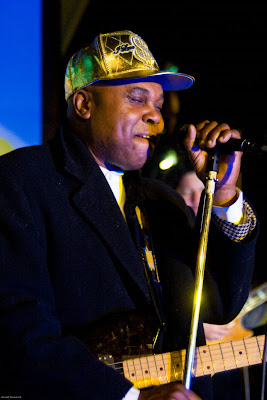 Wayne Kahn, a champion of the Washington Music Scene posted the following in his weekly email newsletter about Chester Chandler who performs under the name Memphis Gold. Memphis Gold fell out of a tree while engaging in his day job of tree removal, falling 40 or so feet. The picture of Memphis Gold is from his New Year's Eve performance in Falls Church, Virginia, which I believe was his last performance.


"Memphis Gold (Chester Chandler) Update
Memphis has been transferred to the William Donald Schaefer Rehabilitation Center at Kernan Hospital 2200 Kernan Drive Baltimore, Maryland
An operation last week inserted titanium rods into his spine to stabilize the area that suffered damage from his fall. He has a long and tough road of rehab ahead. He is in good sprits and appreciates all the good thoughts from fans & friends. He knows he is lucky to be alive. At this time he does not have feeling from the back of his calves down through his feet and it is too early to tell the extent of the damage and how much movement he will re-acquire. He can hold & play a guitar and has been writing some new songs. How about Out on a Limb? So everyone knows, the reason he was up in that tree was that was his day job - tree removal. He threw a safety line over a branch that snapped off.
If anyone can donate a laptop while he is in the hospital, it would be greatly appreciated. When he is not in therapy for these next 8 weeks, he needs to keep his mind busy. If you can help, please contact: Stacy Brooks at Memphisgoldbenefit@yahoo.com
Memphis Gold Fundraiser
DCBS will sponsor a Memphis Gold Fundraiser for the spectacular Blues singer and guitarist who has performed at numerous DC Blues Society events.
Saturday, February 9, 7pm–1am
Chick Hall's Surf Club
Cover: $10
All money raised at the benefit via raffles and donations will be contributed to Memphis Gold.
Dr. S.O. Feelgood is recruiting bands who will donate 30 minutes to the fundraiser. If you'd like to perform, contact Dr. Feelgood at (301) 322-4808.
Please come out and support Memphis Gold!
If you wish, you can send donations to:
Memphis Gold
c/o DCBS
P.O. Box 77315
Washington, DC 20013-7315."

I do add that gifts to Memphis Gold are not tax-deductible! Also I understand Bobby Parker will be among those performing.
Posted by Ron W at 12:07 PM No comments: