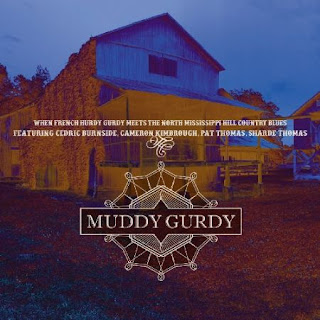 This intriguing recording brings together a French trio (Hypnotic Wheels) with several of the most prominent living players of Mississippi North Hill Country Blues. Hypnotic Wheels is comprised of Tia Gouttebel on vocals and guitar; Gilles Chabenat on the hurdy gurdy, a French traditional instrument and Marco Glomeau on percussion and is inspired by French traditional music as well as the North Mississippi North Hill Country Blues with the hurdy gurdy serving as a second guitar. Their first album alternated original songs with revisited blues. Marco, the percussionist, got this crazy idea: take the hurdy-gurdy to Mississippi and this recording is the result.

After a brief instrumental, we hear four field recordings with Cedric Burnside (and one can hear dogs barking in the background) as they launch into a mesmerizing treatment of RL Burnside's "Goin' Down South," with Cedric and Tia alternating vocals with some spellbinding single note guitar runs against a drone musical background. After the performance ends Cedric talks about times with his brother Cody who died at 29 before going into "The Girl is Bad," with its somewhat jerky groove and slashing slide guitar. This is followed by a high stepping "See My Jumper Hanging On the Line," with the French trio adding their congenial, if unusual sound to this spirited performance of another RL Burnside song. Cedric further shows how well he continues in the manner of his father on "Rollin' and Tumblin'."

Shardé Thomas adds vocals and fife to a vibrant rendition of "Station Blues" (a retitled "Sitting on Top of the World," with Glomeau providing the fife and drum band groove with Tia and Gilles adding their buzzing backing. It is followed by a haunting "Shawty Blues,"and the spiritual "Glory, Glory Hallelujah." Cameron Kimbrough then leads us on a lively rendition of "Leave Her Alone," from his father Junior Kimbrough," set against the mesmerizing backing, while his own "Gonna Love You," is a tough performance in a similar vein.

Pat Thomas' "Dream" has a wistful quality while the hurdy gurdy of Chabenat provides a somber fiddle-like backing. It is followed by the trio's own interpretations including a rendition of Jesse Mae Hemphill's "She Wolf," recorded at Dockery Farms, along renditions of Mississippi Fred McDowell's "Shake 'Em On Down," and B.B. King's recording, "Help The Poor." One wonders Jesse Mae Hemphill might have thought of her music influencing this French singer and guitarist, who does a more than simply capable job in singing and performing these. Pat Thomas, sounding like his father, James 'Son' Thomas, closes this album at the Highway 61 Museum (with traffic in the background) with a simple, stark and moving "Standing at the Crossroads/Dust My Broom" mashup, titled here "Highway 61."

While this won't replace the classic recordings of Fred McDowell, RL Burnside, Jesse Mae Hemphill and Junior Kimbrough, the Hypnotic Wheels has produced a fascinating, enjoyable and idiomatic recording that pays homage to their musical influences. It presents the current practitioners of this tradition with emphatic backing that is so much more appropriate to the music than most efforts to modernize (or commercialize) this tradition. This is a recording that brings pleasure everytime I listen to it.

I received from VizzTone. Here is a short clip relating to this recording. 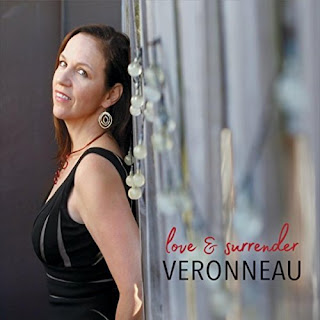 The acoustic trio Veronneau are back with a new album (their fourth) that building on their critically acclaimed and popular world-jazz repertoire. French Canadian vocalist Lynn Véronneau, with guitarists Ken Avis and David Rosenblatt take the listener around the globe, blending samba, French chanson, bossa nova and swing into a genre-defying musical feast. On this they are joined by long-time collaborator British violinist Dave Kline; their regular touring percussionist from Brazil, Bruno Lucini; and other guest musicians from Senegal, Nigeria, the UK and US on a program of five originals along with five intriguing interpretations.

Lynn Veronneau is an alluring vocalist with her honey-toned singing and phrasing well supported by the two guitarists. Kline's violin adds to the funky, samba feel of the opening "Song of Love," with a wonderful solo (by Rosenblatt I believe) and followed by the title track, a lovely ballad sung with a touch of heartbreak, with the kora of Amadou Kouyate adding some delightful musical coloring. There is the charm of a lovely French waltz, Serge Gainsbourg's "La Javanise," with Kline's violin and Tom King's accordion filling out the backing here. I believe Rosenblatt composed "September Moon," a winsome instrumental with the sound of the guitars embellished by Avis' harmonica and Lynn's whistling.

The rendition of Alberto Domínguez's "Perfida," a song of love and betrayal, has a melody that will be familiar to many. It is sung in Spanish with flamenco-accented guitar trading lines with violin,. It is followed by Lynn's haunting vocals on the standard "Spring Can Really Hang You Up the Most," with exquisite backing and then Jim Webb's "The Moon's A Harsh Mistress," both of which display her interpretative skills with a lyric. Brazilian 7-string guitarist JP Silva joins Lynn for a appealing vocal duet on the French-Portuguese mashup "Voce Abusou/Fais Comme L’Oiseau," before "Waltz For Youssef," another marvelous original, that closes a engaging recording that is full of charm, lyricism and superb performances.

I purchased this from Veronneau. Here is an early (pre-CD) performance of "Love & Surrender." There website is http://veronneaumusic.com/.

The Heavyweights Brass Band This City 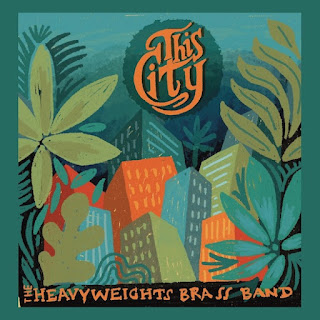 New Orleans Brass Bands has led to a world-wide resurgence of Brass Bands throughout the world. Some remain closer to the roots of their Crescent City inspiration than others. Toronto's Heavyweights bring there own personality to the New Orleans Brass Band sound but they honor their influences with this recording made in New Orleans. The Heavyweights are comprised of John Pittman - Trumpet; Chris Butcher - Trombone; Paul Metcalfe - Tenor Saxophone Tim Richards - Tuba, and Lowell Whitty - Drums with guests including guitarist Kevin Breit and legendary vocalist Jackie Richardson along with bass drum from Joe Lastie of the Preservation Hall Jazz Band, baritone saxophone from Roger Lewis of the Dirty Dozen Brass Band, trumpet from Ashlin Parker of the Ellis Marsalis Quartet, and vocals from Marla W#alters (Dixon) founder of the Shotgun Jazz Band.

Butcher contributed the opening "Hands Down Lo’," with Lastie on bass drum and Parker adding trumpet on a performance that would be at home on early recordings by the Dirty Dozen, and Rebirth Brass Bands. Also sounding like those modern New Orleans Brass Band is the rendition of  Paul Metcalfe's arrangement of Stevie Wonder's "Tell Me Something Good." Richard's "Two Foot Ticket" takes down the tempo and is as much a feature for Breit's bluesy guitar with the horns providing a background. The band's irresistible second line returns with "I've Got Time For You," that features a terrific barreling tuba solo and then searing trumpet from Pittman and saxophone from Metcalfe.

After a short solo baritone saxophone break from Roger Lewis ("Roger's Intro"), the Heavyweights join in for "Dance Out On the Corner," another number that will get the listeners feet moving with Lewis taking a baritone sax solo full of swagger and substance above the insistent groove Richards and Whitty lay down. Pittman and Metcalfe wail on this and Marla Dixon joins the band in their vocals here. Then there is another driving Brass Band number, "Rosco's Big Hit," with Ashlin Parker adding upper register trumpet fireworks.

The Heavyweights close with Steve Earle's homage to post-Katrina New Orleans, "This City," with Jackie Richardson singing "This City won't wash away. This City won't ever drown... ." It is a marvelous performance, even if sounds like something The Band might have recorded as opposed to the partying and street parade of a New Orleans Brass Band. Still there is plenty to party to as well as listen to on this high-spirited and energetic set of modern Brass Band music.

I received a review copy from a publicist. Here The Heavyweights Brass Band perform "Just the Two of Us."