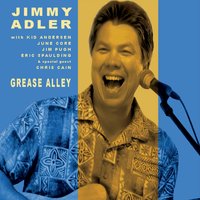 Pittsburgh based Jimmy Adler is a triple-threat as a songwriter, singer and guitarist as evident on his new recording "Grease Alley." Adler traveled California California to record with Kid Andersen at Andersen's Greaseland Studio and was joined but a band that includes Andersen on bass, former Robert Lockwood drummer Junior Core, keyboard wizard Jim Pugh and saxophonist Eric Spaulding with Chris Cain guesting on two of the 13 selections.

"The opening "Say It Like Magic Sam," musically derives from "T-Bone Shuffle." Here, Jimmy sings that he's a guitar man who tries to "tell it like T-Bone, say it like Magic Sam," and contributes some solid T-Bone Walker styled fretwork. It is set against a solid shuffle groove played at a nice, relaxed tempo. The title track is an appealing rocker with a second-line groove on which Pugh adding organ grease. On this, Adler sings about going down to grease alley to get his groove on. "Drank Too Much," an easy rocking lament of overindulgence, has Adler playing slide and evoking Johnny Littlejohn and Homesick James. Adler plays some Muddy Waters-flavored slide on the rollicking closing "Hoodoo Highway."

"No Pain" opens with Albert King sounding guitar with Chris Cain sharing the vocal on a lyric about  the older he gets, the less one knows. "Cornbread and Lima Beans" is a jazzy flavored Albert Collins-type groove with Pugh's Hammond contrasting with Adler's slashing guitar while "Love Was Worth These Blues," has a late night groove with more jazz-tinged guitar and an appealing restrained vocal. Also of note is the reflective and soulful, "What I've Done."

"Grease Alley" is a wonderfully entertaining recording. Jimmy Adler is quite an engaging singer, and a very inventive guitarist/ Kid Andersen and the studio band has provide solid support and grooves that makes for memorable blues.

I received my review copy from Jimmy. Here Jimmy plays 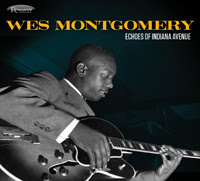 Resonance Records, which last year issued a live Freddie Hubbard recording for the first time, has just issued an important historical recording by the great guitarist, Wes Montgomey, “Echoes of Indiana Avenue.” In a handsomely hard digipac package, Resonance has acquired the rights to the nine performances issued on this that date from 1957-1958 and include four studio performances and five live performances. Michael Cuscuna, among the contributors to the booklet with background on these recordings, Wes and the Indianapolis Jazz scene of the time, suggests these may have been originally recorded in order to help Wes secure a record deal with Pacific Jazz, although it was in 1959 when cannonball Adderly saw Wes and recommended him to Riverside Records that his place as a major jazz guitarist and innovator would be established.

Musically one can hear the elements of his music including his touch, mix of single notes and chords, the use of octaves and his indelible swing. We can contrast his delicate playing on “Darn That Dream” with driving, hard bop playing on “Straight No Chaser,’ with brother Buddy on the piano. Mixing his fluidity with a fertile musical imagination this live performance exhibits the same qualities that would dazzle in a couple years hence with his Riverside releases.

Shorty Rogers’ “Diablo’s Dance,” is a lively, latin-tinged number which starts in a light, swinging fashion until about 1:30 into the performance when Wes takes off, with a piano solo from Melvin Rhyne which is not as dazzling as Montgomery is. Rhyne is heard on organ on the moody “Round Midnight,” with Monk spare, evocative playing delving into one of Monk’s most haunting melodies. On Horace Silver’s “Nica’s Dream,” the performance starts politely enough with a light swing with Montgomery displaying restraint even in his solo.

The last four numbers are live performances with a group including pianist Earl Van Riper, and exhibit a tad bot more presence by Montgomery than the studio recordings. “Take The A Train” has lively solos from both. It is followed by a lovely “Misty” as well as a terrific “Body & Soul” where Montgomery’s technique and nuanced playing is outstanding. The final performance is a stunning, atmospheric improvisation, “After Hours Blues,” with Montgomery providing hard chords (in the vein of T-Bone Walker) to accent the opening late night blues piano solo from Van Riper. On his own solo one hears a blend of string bending, chords and single note runs as the audience responses delighted laughter, whoops and encouragement. It unfortunately fades out but one can imagine him playing another ten minutes in this vein without repeating his ideas.

The sound and packaging is first-rate and if not essential Wes Montgomery, this is certainly an important release that lovers of jazz guitar and Wes Montgomery will want.

I do not recall if I received a review copy or purchased this. This review is from several years past and I do not recall if it was published. Resonance has subsequently issued a double CD package of even earlier recordings of Wes "In the Beginning."
Posted by Ron W at 8:43 AM No comments: