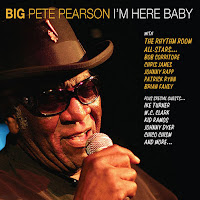 Big Pete Pearson
While the back of the CD cover for I’m Here Baby (Blue Witch) calls Phoenix based Big Pete Pearson a shouter, he comes across more like James Cotton crossed with a bit of Lonnie Brooks to give a sense what he sounds like.. Produced by Bob Corritore and joined by the likes of Ike Turner, Johnny Dyer, Joey Francesco, Leon Blue, Kid Ramos and W.C.Clark. The opening Too Many Drivers is a rocking shuffle in the vein Cotton excelled at with Matt Bishop providing the rollicking piano as Chris James and Johnny Rapp on guitar help push the groove while producer Corritore wails on harp. Its a good indication of what’s to come on this set of straight, no chaser blues. Leon Blue handles the ivories and Corritore is on chromatic harp on a nice version of Tin Pan Alley with a nice gritty vocal. A good song writer, his original The Way I See It, has him reaching down on his vocal, while Worried About My Baby is an easy rocking number with Johnny Dyer contributing a nice harp break on a recording that would have been at home on a vintage Chicago blues collection. I’m Here Baby, is a slow-drag bump and grind number that Pearson just pours his heart into. Ike Turner and Joey DeFrancesco are present for Big Legged Woman, a number that brings Lonnie Brooks to mind while a more West Coast flavor is on the evocative rendition of Percy Mayfield’s The Highway Is Like a Woman. Cousin W.C. Clark join on a spirited blues medley, trading verses and songs as well as the closing Texas Blues Memories. Possum Up the Tree, with Kid Ramos on guitar evokes vintage Muddy Waters while there is a down home flavor added to Natural Ball. While Texas born, Big Pete’s music sounds like he was in Chicago, not Phoenix, the past fifty years. This is an exhilarating blues disc that certainly should make him a singer in demand on the hopefully reviving blues circuit. This is a good one. Check out www.bluewitchrecords.com or www.bigpetepearson.net for more information.
Posted by Ron W at 10:59 PM No comments:

Tim Niland, who has a fascinating blog of jazz and blues reviews just has put forth a new podcast of jazz and blues with a diverse playlist that includes Otis Rush, Sunnyland Slim, Big Joe Turner, Earl Hooker and James Hunter with Williams Parker, Peter Brotzmann, Shirley Scott and Clifford Thornton amongst others. Click on podcast on his entry on the podcast and you can download it to listen to on your computer. A lot of fresh musical surprises are ins tore for those who give it a listen.
Posted by Ron W at 9:04 PM No comments: 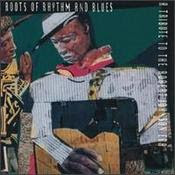 In 1991, the Smithsonian Institution's annual Folklife Festival presented, as one of the featured presentations of the Festival, The Roots of Rhythm and Blues: A Tribute to the Robert Johnson Era. I was fortunate enough to attend and had the pleasure to see a number of captivating workshops and performances. I still recall folklorist and scholar Worth Long asking Robert Lockwood and Johnny Shines about songs Robert Johnson performed but never recorded. That was the first time I heard of Hacksaw Harney who Robert Lockwood Jr said was one of the few guitarists other than his step-father who impressed Lockwood. There was marvelous music whether Ruth Brown on the first day singing accompanied by Robert Lockwood, or Vernell Townsend (accompanied by husband Henry) singing Stormy Monday as if Walter Davis had recorded that number. Of the artists I had not heard previously, Eddie Cusic stood out with his straight-ahead Delta style blues. Some music from that festival was issued on a Sony-Legacy album which only hinted at the music performed and collected. I reviewed it back in 1992 and here is my review as printed in Jazz and Blues Report out of Cleveland. (www.jazz-blues.org)

This release from Sony/Columbia, in conjunction with Smithsonian/Folkways, documents the program that was part of the 1991 Smithsonian Folklife Festival. Those fortunate enough to attend the festival will remember some of these performances and the workshops, oral history and performers not represented here. In addition to associates of Robert Johnson, like the late Johnny “Ned” Shines, Robert Jr. Lockwood, David ‘Honeyboy’ Edwards and Henry Townsend, a variety of delta blues and traditional African American performers were presented including Lonnie Pitchford, Jessie Mae Hemphill, and others. In addition to festival performers, there are ringers here. While Phil Wiggins appeared at the Festival, John Cephas did not. While I originally thought Cephas and Wiggins’ fine Brownsville Blues was from an earlier festival, I have been told this is a studio performance with dubbed-in applause. Toshi Reagon is heard on another studio recording, albeit without dubbed crowd noise. The centerpiece of the performances are several loose jams credited to Johnny “Ned” Shines (with these being his last “official recordings”) and ensemble. The ensemble includes Townsend on piano, Lockwood on guitar, Shines’ young associate Kent DuChaine on guitar, Lonnie Pitchford on bass guitar and Phil Wiggins on harmonica. There was another jam session with Honeyboy and Larry Wise replacing Lockwood and Wiggins, but nothing from that jam is represented here. Certainly the jam recordings are historic, although the music has some rough edges, with Pitchfords’s bass, Townsend’s piano and Lockwood’s strong authoritative playing keep things from getting too chaotic. The album opens with a very ragged Sweet Home Chicago, on which Shines’ singing sounded tired. The other songs, including his B.B. King influenced Loved and Lost (a retitled version of Have to Pay the Cost) are better performances. Also interesting are Shines’ three short acappella performances including a street vendor’s cry, Watermelons, and the traditional Tell Me How You Want Your Rolling Done. Documentation of these archaic song forms is invaluable whether by Shines, former Parchman Farm inmate David Savage, heard on two field hollers, or some retired railroad workers singing while demonstrating lining tracks. Lockwood and Edwards turn in workmanlike solo performances, Lonnie Pitchford’s three Robert Johnson numbers are adeptly performed, but solo performances by Henry Townsend (sounding like Walter Davis on the superb All My Money’s Gone on piano), and Jessie Mae Hemphill (a very strong Train, Train) stand out. Also included is a solo harmonica feature by Phil Wiggins, and several religious performances from the Moving Star Hall Singers. There were a number of strongly delivered performances not included, ostensively because of technical problems attributable to the hot, humid weather that made keeping in tune a real adventure. Barry Lee Pearson and Bernice Reagon places the performances in their social and historic context. While not indispensable, this makes available a variety of performances and performers not otherwise likely to be found on a major label, and has value beyond that of a festival souvenir.