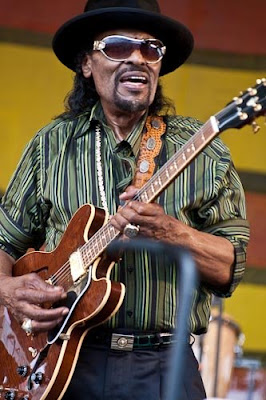 On his most recent recording, Washington musical legend Chuck Brown intersperses some interviews among his Go Go music. One short question is if he could only play one musical genre, what would it be. And he answers "The Blues." Chuck has mixed blues and swing in with his originals funk and Go Go, but he will be doing a special performance of the blues backed by Bobby Parker and his Band at Fall Church, Virginia's The State Theatre, Friday, June 12 at 8:00PM. It is sort of appropriate since in the Washington Post a year or so ago, Brown credited seeing Bobby Parker for inspiring him to play guitar. This should be an amazing show, and certainly the most interesting local (DC area) blues show in some time. It is a benefit for the annual; Tinner Hill John Jackson Blues Festival that starts that day and runs through Sunday, June 14.

Most of the events at the festival are free and all take place in the City of Falls Church. The afternoon of June 12 with lunchtime performances by the likes of the Southside Homewreckers and Greg Kimball with Jeff Scott (a nephew of the late John Jackson). Saturday Morning there will be blues played during the weekly Farmer's Market at City Hall and a panel discussion, Whites, Blacks, and Blues: The Past, Present, and Politics of Blues Music, moderated by Gregg Kimball with scheduled participants including Kip Lornell, Luvenia George, Barry Pearson, Harold Anderson,Ida Campbell, Phil Wiggins, Rick Franklin, Warner Williams. There will be a variety of activities including the screening of John Jackson - A Blues Treasure, a short documentary on the life of John Jackson at the Falls Church Community Center. The main part of the Festival takes place at City Hall Park and the highlights among the performers include Deanna Bogart; Daryl Davis & the Blues Divas including Angela Hill, Stacy Brooks and Ruby Hayes; Nadine Rae & the All Stars and Warner Williams.

Sunday there will be a jam at Bangkok Blues and an exhibition of artwork by Jackie Merritt who will also be performing with M.S.G., the Acoustic Blues Trio. Its a marvelous festival with more information available at http://www.tinnerhill.org/blues.

It is unfortunate that there is a scheduling conflict with the Duke Ellington Jazz Festival which will have two major concerts on the National Mall in Washington on June 13 and 14. This is in part due to the Ellington Festival moving this year from early fall to late spring. Hopefully this conflict will be avoided next year. 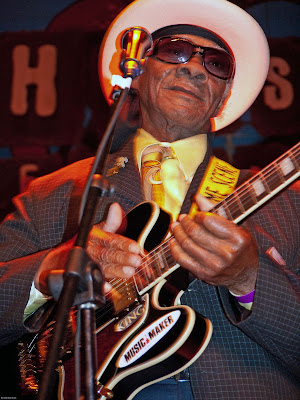 I was recently in New Orleans for the second weekend of the New Orleans Jazz & Heritage Festival along with the 8th Ponderosa Stomp. As part of the Stomp I had the pleasure of seeing the down home blues of Little Freddie King who was part of a New Orleans Music revue at the stomp. Freddie is a wonderful down home blues performer with a style not that far removed from the North Mississippi Hills style of the late R.L. Burnside while also being an animated performer. Little Freddie will be coming to the Nation's capital as part of the musical gumbo to be displayed at this year's Duke Ellington Jazz Festival.

As stated, the music of New Orleans music will be featured at this year's Duke Ellington Jazz Festival in Washington DC. There will be performances on the National Mall on the weekend of June 13 and 14 with Little Freddie and such other acts as Nicholas Payton, Don Vappie, Bob French, Buckwheat Zydeco, Rebirth Brass Band, and Irma Thomas Duke Ellington Orchestra The Duke Ellington Orchestra will be performing the late maestro's New Orleans Suite. Also on the National Mall, Friday night June 12, The Terence Blanchard Quintet with Chamber Orchestra will perform his A Tale of God’s Will – A Requiem for Katrina. On Monday, June 15, the Festival concludes with a Kennedy Center hosted JazzMasters Tribute to pianist, composer and educator Ellis Marsalis with Marsalis' sons Wynton, Bradford, Delfeayo and Jason performing along with Harry Connick Jr., Dr. Billy Taylor, Herlin Riley and Eric Revis. The Festival also has family events and concerts throughout the Washington area between June 6 and 15 and club performances during this time span at venues like Twins and Blues Alley. Many performances are free. For more information visit http://www.dejazzfest.org/.
Posted by Ron W at 11:02 AM No comments: