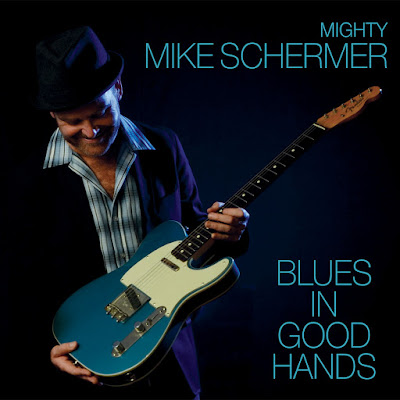 Marcia Ball's guitarist since 2009, Mighty Mike Schermer has played with a who's who of blues and roots acts including most notably Angela Strehli and Elvin Bishop, and recorded with Ball, Bishop, Maria Muldaur, Howard Tate, Sista Monica and many more. He has a new release under his own name, "Blues In Good Hands" (Finedog Records/Vizztone), mostly recorded at Kid Andersen’s Greaseland Recording Studios in San Jose, CA, with an A-List of musicians from the Bay Area, CA and Austin, TX music scenes including Paul Revilli, Tony Stead, Steve Ehrmann, Austin Delone, Nancy Wright, Terry Hanck, along with guest appearances by Marcia Ball, Tommy Castro, John Németh, and Carolyn Wonderland. Schermer penned the 13 songs (three in collaboration with others).

Mostly recorded at Kid Andersen's Greaseland Studio, and mixed by Andersen, this varied recording benefits from the uncluttered and clean production of these crisply delivered performances. Schermer displays his many talents on the opening "Baby Don't Stop," with his appealing gritty vocals and keen guitar (there is a nice Hanck solo here) with the rhythm section very tight behind him. While he may have a narrow vocal range, Schermer's understated, unforced singing has considerable appeal appealing. "Heaven's on the Other Side," has a nice lyric about struggling in his everyday with bill collectors and car not running with a catchy hook about not minding to go through hell if heaven is on the other side. Set against a funky vamp, he has a fiery, concise guitar solo. "It's a Pleasure" is a lovely ballad while a reggae groove anchors the peppy "One Tear At a Time," and then there "Wait-On-Me Woman," with Greg Izor's harmonica along with the relaxed shuffle groove.

The title track with Schermer's mix of his own experiences (how seeing Albert Collins perform and  conduct himself, changed Schermer's life, as well as how he and Terry Hanck were affected by Junior Walker's passing),  inspired him to write and perform songs that everyone could understand, that were real which everyone could feel. I usually dislike 'keep the blues alive' songs, but Schermer's lyric and  solid playing make this an exception. "Most People," with twangy guitar and a swampy feel is suggestive of some of Bobby Charles' songs. Marcia Ball adds piano to the rollicking "Barkin' Up The Wrong Tree," while Tommy Castro adds some fiery guitar to the slow blues "Stop Crying," while John Nemeth adds harmonica to the lazy Jimmy Reed groove of "Baby Be Kind."

There is so much to like about this recording. Schermer is a marvelous songwriter, guitarists and a singer with wit and heart. With the strong backing throughout, this is a gem of a recording.

I received my review copy from VizzTone.Here is a video of him in performance.