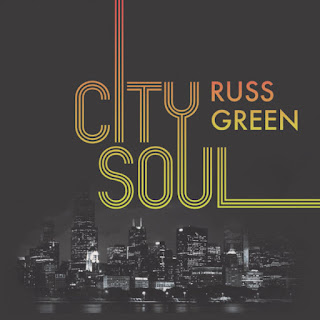 Russ Green is a name that I remember as one of the players on the Chicago Blues Harmonica Project albums. This Chicago native has an interesting career that has seen him becoming involved in film production as well as music. His harmonica playing shows the influence of Sugar Blue and Billy Branch and on this debut album he wrote all of the songs (one in collaboration with Eric Bibb). He is backed by a band that includes Giles Corey on guitar, Marvin Little on bass, Ricky Nelson on drums, Vince Agwada on slide guitar and Joe Munroe on the Hammond B3, with Eric Bibb singing an adding acoustic guitar on one selection.

There is some hot music to be heard here, starting with the hyper-kinetic boogie, "First Thing Smokin'" with Agwada's slide guitar adding to a near frantic pace. Green certainly has no problem with the tempo whether his blazing harp playing and his soulful singing and one is struck by the clarity of his phrasing. "Believe in Love" has a more relaxed, reggae-tinged groove as again he impresses with his singing as well as his horn-like harp playing, set against a crisp, low-key backing. The longest track here is "The Edge," a funky blues that opens with his wet, full-bodied harp before his sings about empty bottles on the table and floor with his mind shaking dealing with poverty and staying on the edge with a razor blade and no shoes on his feet.

Eric Bibb joins on "Goin' Down South," where the two share the vocal to see where their people come from, where they live the blues, and see the ghost of ole Jim Crow. Green's harp playing here is a bit more down-home, owing a more to Billy Branch here, while Bibb takes an acoustic guitar solo. Munroe is more prominent on the funky blues "Lover Man," with more fat-toned harp playing, while a stark bass figure underlies the topical "Train of Pain." There is a bluesy rock flavor to "Somethin' New," with some slide guitar adding to the mood here, while the closing "Love to Give," has more of a soul groover on

There is plenty to impress the listener on "City Soul" from Green's very modern blues harp, his relaxed baritone vocals and the solid studio band. Add to the fine playing here,  striking original material and one has a memorable debut album.

I received my review copy from a publicist. Here is Russ Green's recording of "Believe in Love."