Watermelon Slim Church of the Blues 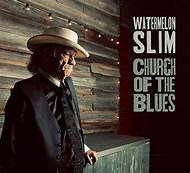 This is the 13th album by William P. Homans, better known as Watermelon Slim, dating back to 1973 when his "Merry Airbrakes" recording was celebrated as one of the first anti-Vietnam War albums done by a military veteran. It took him 29 years for his second album, "Big Shoes To Fill," which established his acclaimed career. Mississippi Fred McDowell is perhaps his biggest influence, and he developed his slide style as well as his gritty, raspy vocals. He co-produced this album with Chris Hardwick as well as plays harmonica and electric slide guitar. He is backed by his band of John Allouise on bass and Brian Wells on drums. He has guests including guitarists Bob Margolin, Nick Schnebelen, and Joe Louis Walker; vocalists Sherman Holmes and John Nemeth; and keyboardist Red Young. While the guests may add interest to this recording, it is Slim with his strong playing, vocals, and personality that makes this album so enjoyable.

The recording opens with "St. Peter's Ledger,' as he authoritatively delivers Ron Meadow's lyrics about where he might end up in the after-life and displays his strong slide guitar style. He follows up with one of several topical songs, Tom McFarland's 'Tax Man Blues," a strongly performed working man's complaint of having too much taken out of his pay stub. The strong backing enhances his strong singing and slide guitar solo. Muddy Waters' "Gypsy Woman" (with Slim on harp and Bob Margolin adding playing slide) is one of several covers of classic Chicago blues that he avoids copying the original while placing his stamp on the performance. Other similarly strong performances include Howlin' Wolf's "Smokestack Lightning" and J. B. Hutto's "Too Much Alcohol.' He makes minor changes in the arrangement (no trace of broom dusting on the Hutto number) so that these songs receive a fresh feel along with his powerful singing and playing.

Slim's "Post-Modern Blues," with the strutting horns, has him singing about trying to deal with the rapid changes of the 21st Century, while "Hollar #4" is a moving vocal moan about blues and his own life. His rendition of Allen Toussaint's "Get Out of My Life Woman" with his slide driven accompaniment evokes the early Paul Butterfield cover while a similar funky feel is present on a cover of Gene Barge's "Me and My Woman," the latter tune sporting more fine harmonica. Among other high points include the high-stepping topical blues about protests and the increasing visibility of overt racism "Charlottesville (Blues for My Nation)," with his hope for better days for all. An amusing bonus song, 'Halloween Mama" closes another excellent Watermelon Slim recording.

A received my review copy from a publicist. This review originally appeared in the March-April 2019 Jazz & Blues Report (Issue 383).  I have previously reviewed some Watermelon Slim albums including "Escape From the Chicken Coop," the eponymously titled "Watermelon Slim and the Workers," and "No Paid Holidays." Here is Watermelon Slim performing.