The Nighthawks Tryin' To Get To You 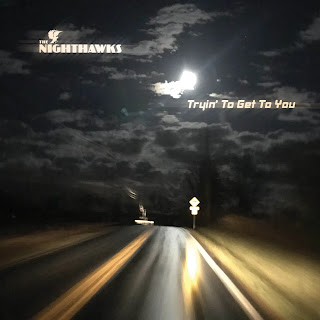 The Nighthawks
Tryin' To Get To You
EllerSoul Records

With their 50th Anniversary coming towards the end of 2021, The Nighthawks have a new line-up but still show that they are a seminal American roots music band with this latest release. Joining original Hawk, Mark Wenner (vocals and harmonica) and drummer Mark Stutso (who has been with the band 10 years are guitarist Dan Hovey and bassist Paul Pisciotta. Traveling the blues roots highway, There are two originals from Hovey and two from Stutso and his longtime collaborator Norman Nardini, and nine covers of songs that have not been overdone to death.

Pisciotta replaces Castle seamlessly as a rhythm duo, while Hovey certain displays his own flair as a guitarist. Mark Wenner remains a robust vocalist and his horn-like harmonica playing is still at the top of his game. They open up with a lesser-known Jimmy Reed number with Wenner taking the vocal lead on "Come Love," as the band hits a lazy shuffle groove. Wenner also handles the vocal on the title track that Elvis originally recovered. The Nighthawks version has a definite country feel. Wenner transforms The Manhattan's "Searchin' For My Baby," into a chugging blues performance.

I believe it is Hovey taking the vocal on a relaxed cover of T-Bone Walker's "I Know Your Wig Is Gone," with his jazzy jump guitar joined by Wenner's horn-like solo. Hovey sings strongly on the brooding rendition of Hank Ballard's "Rain Down Tears," and a fine interpretation of Los Lobos' "Don't Worry Baby." Then there is the unplugged groove of Hovey's "The Cheap Stuff," with Wenner channeling the second Sonny Boy Williamson.

With Hovey channeling Jimmy Nolen, Stutso potently handles James Brown's "Tell Me What I Did Wrong." There is an urgent quality in Stutso's of his original, "I Hate a Nickel," with its memorable tagline, "cause it ain't a dime." It is not his only impressive vocal. He sings a superb rendition of the "Chairman of the Board" (originally recorded by the group of the same name). Set against the "Mannish Boy" groove, Stutso tears into the lyric with the band solidly backing him.

The Nighthawks keep rocking and roiling down the blues highway. "Tryin' To Get To You" is another splendid addition toothier discography.

I received my review copy from a publicist. Here is a set of the Nighthawks performing in Takoma Park, Maryland, in 2019.