Horizons Jazz Orchestra Plays the Music of Lee Harris: "The Brite Side" 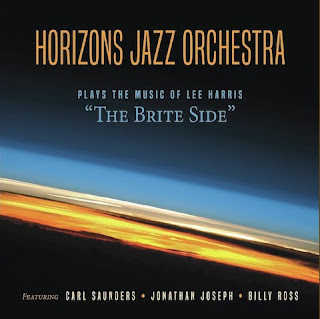 The South Florida based Horizons Jazz Orchestra salutes the late baritone saxophonist, composer, and arranger, Lee Harris. With trumpeter Dennis Noday, Harris had formed the big band Superband to perform Harris' arrangements and compositions. Social media promoter Jeanette C. Piña championed this band. She supported a project to record Lee Harris' music faltered as Harris' health failed. Ms. Piña got Noday and the lead trombonist, Michael Balogh, to realize the project. However, Harris passed before the project could be finished. As some of the members of Superband moved on to other projects, Balogh and Ms. Piña decided to rebrand this big band as the Horizons Jazz Orchestra and make the debut album a tribute to their old friend.

Balogh recruited for this recording three old friends as guest artists who play on some, not all tracks. These are trumpeter Carl Saunders, drummer Jonathan Joseph, and woodwind specialist Billy Ross. Notable members of the Orchestra include the rhythm section of Gary Mayone on keyboards, Ranses Colon on basses, Luke Williams on guitar, and George Mazzeo on drums. Other notable band members include Scott Klarman, Joe Miletti, and Randy Emerick on reeds, and Dennis Noday on trumpet and flugelhorn.

This recording is a wonderfully played, welcoming collection of originals, and innovative arrangements of some classic songs. Harris' arrangements result in some very captivating performances. The opening "Red Apple Sweet" is a lively Harris original in several portions that sounds like a contrafact of "Wade in the Water." There is impressive section work before short solos from guest drummer Jonathan and Mayone on the organ before the tempo slows down, and Balogh plays a lovely solo. There is a gorgeous performance of "Pure Imagination" from the film "Willy Wonka & the Chocolate Factory." In addition to the resonant reeds, Saunders showcases his brisk, bright flugelhorn playing here.

Harris's arrangement of Turner Layton's 1918 song, "After You've Gone," brings a modern tone to a song associated with traditional jazz groups. Mayone opens this energetic performance on electric piano, with solos from Klarman and Ross on alto sax and tenor sax respectfully before Saunders solos on trumpet against Harris' arrangement of the horns. Saunders' crisp trumpet is again in the spotlight on "The Fourth Dimension," an uptempo swinger. Randy Emerick's brawny baritone sax and guitarist Williams also solo on this number.

Closing the album is "A Train Bossa," Harris' imaginative reconstruction of the Billy Strayhorn composed Duke Ellington theme song. Ross' solo here shows a bit of Stan Getz's influence, while Saunders plays with crisply and a definite bite. It is a superb close to an outstanding big band recording.

I received my review copy from a publicist. Here is the Horizons Jazz Orchestra playing "The Fourth Dimension."