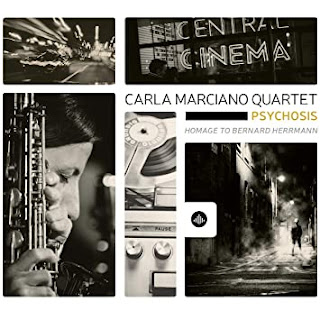 This writer became aware of Italian saxophonist Carla Marciano and her Quartet from her album "Stream of Consciousness" (Alfa Music). That was her fourth album (her first three were on Black Saint). Starting with the opening "God Rest Ye Merry, Gentlemen," I was struck by how she and her band played with such tenacity and energy. Her band includes her husband Alessandro La Corte on piano and keyboards, Aldo Vigorito on double bass, and Gaetano Fasano on drums. The music was evocative of the classic Coltrane Quartet (thinking of Coltrane's rendition of "Greensleeves," for example) but performed with such vigor and belief.

Marciano (who plays alto and sopranino saxophones) explains the inspiration for this album, "This album is my heartfelt homage to one of the greatest geniuses of film score, the composer and conductor Bernard Herrmann, whose music has dazzled me since I was a child. It has been very interesting to arrange, revise and adapt, for a jazz quartet, some of the best known themes from outstanding soundtracks Herrmann wrote for equally outstanding films - all psychological thrillers (hence the title Psychosis) … . Bearing a classic feel and originally conceived for orchestras, the tracks in this album were arranged in full respect of the originals, leaving intact, for example, the beauty of the melodies, while at the same time creating new improvisational spaces that would allow our Quartet to maintain its own identity."

While having only a casual acquaintance with Herrmann's work, I was impressed by Marciano and her Quartet's capture of the dramatic aspects of Herrmann's musical themes. This starts with "Theme From 'Taxi Driver,'" where her statement of the theme initially is backed by atmospheric chords from La Corte. A dramatic opening of "Theme From 'Marnie,'" launches into a performance that illustrates her robust tone as well as musical inventions. In contrast, the performance evolves with La Corte suggesting McCoy Tyner. At the same time, Vigorito and Fasano propel this performance before Marciano reenters with further dynamic saxophone in a post-Coltrane vein. Her fiery sopranino sax captures the listener's attention on "Theme From 'Twisted Nerve,'" that showcases Vigorito and La Sorte while Fasano dazzles. La Sorte's opens "Theme From 'Psycho,'" a Vigorito performance marked by atonality, dissonance, Marciano's ecstatic playing, and a well-crafted drum solo.

After the group's memorable renditions of Herrmann's themes, the album closes in a Coltrane-ish mode. Marciano plays swirling, serpentine sopranino sax on La Sorte's arrangement of John Williams' "Theme from 'Harry Potter' (Hedwig's Theme)." It is another engrossing performance on an outstanding recording.

I received a review copy from a publicist. This review originally appeared in the January-February 2021 Jazz & Blues Report (Issue 394). I have made a couple minor edits. Here is a clip of the Carla Marciano Quartet in the studio.