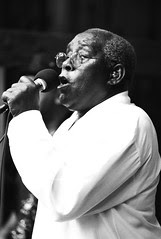 00740028
Originally uploaded by NoVARon.
I already have expressed my appreciation for the late Little Sonny Warner, but felt it useful to place a lengthier obituary for this wonderful singer and person.

Haywood, ‘Little Sonny’ Warner, one of the greatest blues artists to emerge from the Washington DC music scene passed away on April 12, 2007 from the effects of prostate cancer. Warner, born October 30, 1930, grew up in Falls Church, Virginia on Shreve Road, behind what was then Peacock Buick. As a teen he was part of a gospel group "The Four Sons" who sang at the Second Baptist Church in Falls Church. This was the beginning of his lengthy musical career. This group went up to New York and as the Rockets, backed legendary Atlantic Records session pianist Van Walls on Walls' single releases, "After Midnight" and "Open the Door."

Sonny became part of the DC music scene, singing at various area clubs while holding down a day job. In the mid 1950s he became valet for the legendary Lloyd Price in Prices’ touring band who had established the Washington DC based KRC label with Harold Logan and Bill Boskent. Being a valet also included some part-time vocal duties, Initially he shared duties with Price’s cousin, Larry Williams but Specialty Records' Art Rupe got Williams to sign with Specialty and start on his own career. Warner wasn’t unhappy, telling blues scholar Larry Benicewicz ““You see, Larry was also a hairdresser, which gave him an advantage, because Lloyd would always want to look good for his public. I could never compete with that.”

Benicewicz noted that Warner tired of Price’s grueling road itinerary and returned to the Washington area where still popular as a local entertainer he began hanging out at various clubs, including the legendary Maryland venue, where he would sit in with the locals. he recalled to Benicewicz, ““I met Jay McNeely at a place called Evan’s Grill in Forrestville, MD, and his singer wasn’t doin’ nothin. The crowd egged me to go on, so I got Jay to agree. I never saw that vocalist again.” Jay asked Sonny to go on the road with him and a few months later he Sonny left his day job and small local gigs behind to join McNeely in Seattle where Big Jay was based. He fronted McNeely’s Band, scoring with his Ray Charles influenced vocals. In Seattle, they were recorded at the Birdland club which McNeely later issued on his Swingin’ label (and this is available today on Collectables) which mixed a number of wild instrumentals showcasing McNeely’s honking tenor sax along with Warner’s soulful singing which included an early version of “There is Something on Your Mind.”

Big Jay’s recording of “There is Something on Your Mind” with Little Sonny’s vocal was the big moment in Sonny’s career, with the record going gold. The record, issued on the Swingin' label of Hunter Hancock, Roger Davenport and McNeely became a major R&B smash in 1959, even reaching #44 on the Pop Top 100. Sonny’s wonderful delivery of the lyrics and his ad-lib scatting towards the vocal’s end is still appealing almost five decades later. It was a classic recording of a terrific song and has been covered by numerous performers including Bobby Marchan, James Cotton, Kenny Neal, Professor Longhair and B.B. King. Over the next couple years, several more singles, some simply instrumentals, were waxed by McNeely and band but none reached the success of the song that took Big Jay, Little Sonny and band across the country playing some of the great venous and sharing the stage with other R&B giants.
Eventually, Sonny left McNeely and returned to the Washington DC area. He was able to hook up with Bill Boskent who Sonny would have gotten to know when he was with Lloyd Price because Boskent was Price’s road manager. Larry Benicewicz notes that Boskent recorded Sonny producing a pop flavored ballad “Wallflower” backed by the bouncy “That’s For Me” (both Boskent compositions) for the first Bee Bee (for Bill Boskent) release in 1961, and two more sides (duets with Marie Allen) in 1962. Benicewicz stated the recordings had an impact in the Mid-Atlantic region, but did not break out as had been hoped. Then Boskent recorded Warner for a band new Lloyd Price enterprise, Concertone records, but again the recording did not meet expectations. Later in 1966, Sonny recorded what was possibly his best know post-Big Jay recording, the single “Bell Bottom Blue Jeans” and Been So Long,” which was produced by Ted Bodner. The former tune remained a staple of his repertoire until the end.

Over the next few decades, Sonny continued to perform, being one of the most highly regarded artists in the region. He evoked Ray Charles as he sang blues and soul songs, and was always backed by a crack band. He continued to play the top venues in the region, and when Lamont's opened in 1990, was its opening act. He performed at The Taste of DC and twice was featured at the DC Blues Festival (1992 and 1998) where he captured his audience with his singing and his stage presence, being a whirling dervish on the stage. And as former DC Blues Society President Bob Gray would say, no one could sing “There is Something on Your Mind” like Sonny Warner could.

One highlight of recent years was being reunited with Big Jay McNeely at the August 1997, Hot August Blues event in Monkton, Maryland. It may have been the only time since he split from McNeely in the early sixties that the two shared the stage together. Brad Selko, who with his late wife Marcia, produced the event, mentioned that people still tell him that Sonny’s performance that day was among the most memorable shows they had ever seen. This writer also remembers Sonny as one of the acts at the 2000 Gator Blues Festival at Lamont’s where he left the stage to wade into the enthusiastic crowd.

Sonny continued performing, but slowed down his pace. He was discovered by Falls Church community activist David Eckert. Eckert, who had worked vigorously to recover the civil rights legacy of the Falls Church area, earlier helped the region appreciate the role of Piedmont Blues pioneer John Jackson. Eckert helped arrange performances for Sonny at the City’s First Friday celebration, the annual Tinner Hill Festival (a celebration of the first rural NAACP chapter in Virginia) and at the City of Falls Church’s"Concerts in the Park" series held Falls Church's Cherry Hill Park.

In more recent years Sonny endured some health ailments. He was diagnosed with prostate cancer and received treatment and slowed down his performances. Some of his last performances were as part of a revue, The DC Allstars that included Pookie Hudson & the Spaniels, The Jewels, The Velons, The Orioles, Skip Mahoney & the Casuals, and The Winstons. Still the health problems limited his ability to perform. When Big Jay called Sonny to join him in Italy to help Jay celebrate his 80th Birthday, Sonny was unable to join his fellow legend.

I happened upon Sonny and his wife Catherine on several occasions the past couple years, and it would always bring a smile just to chat with him. Even when last summer at a Safeway parking lot, when he told me his was undergoing chemo for the prostate cancer, he still had the infectious smile and optimism about the future. Sonny was as nice a person as he was one of the finest blues singers ever to come out of Washington. And he was so good that if there is ever a DC Blues Hall of Fame, he will be one of the charter members.

Sonny was survived by his wife, Catherine, seven children and two stepchildren; sister Jessie Mae Simmons and brother, Joseph Hunter; 13 grandchildren, 12 great-grandchildren, eight sisters-in-law, six brothers-in-law, numerous nieces and nephews, other relatives and many friends. To his family we extend our condolences.
Posted by Ron W at 8:45 PM

I DON'T KNOW WHO IN THE HELL POSTED HIS OBITUARY BUT LET ME GIVE YOU THE INFO THAT THEY LEFT OUT.

IT IS A CRYING SHAME THAT WE HAD TO LEARN OF HIS DEMISE THRU A CHURCH MEMBER OF THIS MIDDLE SISTER EVELYN WARNER.

WE THE FAMILY KNEW NOTHING OF THIS "SO CALLED WIFE THAT HE HAS""BEEN MARRIED TO ALL OF HIS LIFE" WE DO NOT APPRECIATE THE FACT THAT HIS MOTHER CHARLOTTE WARNER OR FATHER HAYWOOD WARNER WERE NOT MENTIONED (BOTH DECEASED).

WE WERE NOT NOTIFIED OF HIS PASSING. WE WOULD LIKE TO HAVE AT LEAST ATTENDED HIS SERVICES,AND TO BE DEPRIVED OF THIS IS TOTALLY SELFISH AND LUDACRIS.

WHAT EVER THERE WAS TO GAIN FOR FOR THE "WIFE" WAS DUE TO HER,(GOOD AND BAD)WE WOULD AT LEAST WOULD HAVE LIKE TO HAVE PAID OUR FINAL RESPECTS TO THE ELDEST SIBLING OF THE WARNER CLAN.

SO TO ALL THAT READ THIS, IS THE PART OF THE OBITUARY THAT WAS LEFT OUT.

AND TO THE M/F'S THAT DID IT WITH OUT TO MUCH KNOWLEDGE OF MY BROTHER....SCREW YOU ALL! WHAT EVER THERE WAS TO GAIN THAT YOU GOT I HOPE THAT YOU RIGHTFULY DESERVED IT(GOOD AND BAD)
FROM THE ELDEST LIVING FEMALE SIBILING E.WARNER-PERRY.

Wow. I do not know what to say. All I know is what I posted was mostly from an interview I did with Sonny and from similar ones which did not focus on all of his families but which celebrated his life and music. It was directed towards members of the blues and jazz communities around the world. As far as so-called wife, well Catherine was with Sonny for the ten or so years I knew him and whenever I saw him around town, she was there. She was the one who took care of him when he was ill and called me when Sonny passed. There was an announcement of his death in the Washington Post, but no obituary appeared there. Sorry about not including his parents names (my interview was done in 1998 by hand and I may have gotten that info or not. He had many family members and friends there at his funeral, including sons, daughters and grandchildren. Your brother deserved far greater recognition among folks than he did and I did the best I could

Thanks for the information on Sonny. I played sax in his band in late '85 before I eventually moved to New York to pursue music up there. Sonny was a great talent and showman and I'm happy that he was able to share his music until the end. If you have any info on some of the other cats he played with such as Ray (guitar), Fanny (bass) or Rico (guitar), let me know. You can contact me at www.mysace.com/chrisfaganmusic

I would like to say that you really made my day, it's wonderful when you just look around the web
and find something like this, reminds me of that ''How to make a dinner for a romantic...'' by Elsa Thomas,
you're a wonderful writer let me tell you!!! ñ_ñ

Hi my name is Joyce Hollis-Bell and i am trying to get in touch with Ethelene or Evelyn Warner. We live on the same street (Oakdale Place N.W.) and went to Mott Elementary School. Please email me at jhollisbell@yahoo.com to get more information. My condolenscences to the family - I met sonny several times while I was living in D.C. I remember his song Bell Bottom Blue Jeans.