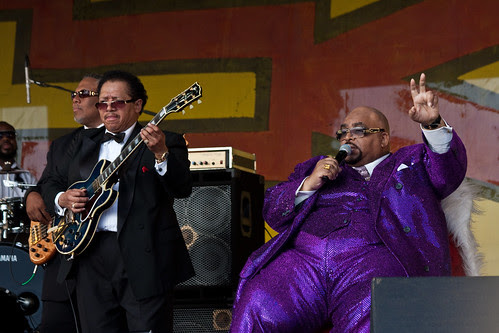 
A number of media including bloggers have shown their appreciation of the great Solomon Burke. So to supplement my blog entry of a couple days past, here are some links and quotes for you. This is only a small sample of what is out there.

Ben Sisario drafted the obituary for New York Times: "In a genre known for outsize personalities and flamboyant showmanship, Mr. Burke stood out for his sheer boldness and eccentricity. A radio D.J. crowned him the King of Rock and Soul in 1964, and Mr. Burke took the coronation to heart. For the rest of his career, he often performed in full royal habit — crown, scepter and robe — and sat on a golden throne onstage. Wide-shaped in his youth, he grew into Henry VIII-like corpulence, and in his later years had to be wheeled to his throne."


"Anointed "King Solomon" by promoters and disc jockeys, Mr. Burke was known for his outsized personality, regal bearing - he often wore a crown and carried a scepter - and above all, his rich baritone voice.

With his contemporaries Sam Cooke and Ray Charles, Mr. Burke brought the enduring influences of gospel and country music to bear on rhythm-and-blues - a combination much copied by other soul singers throughout the 1960s.
My friend Bret Littlehales blogged on him.

"Mr. Guralnick [in his book "Sweet Soul Music"] provides insight into the tightrope walk between the sacred and the profane that Solomon Burke had mastered from his early days onward. Part man of the cloth, part hustler, all genius and possessed with one of the three or four greatest voices in the history of the idiom, Burke divided his time between the church and the stage, selling his blessings backstage at the Apollo during breaks from performing his great hits, like Cry to Me and Got to Get You Off My Mind."

"Everything about Solomon Burke was bigger than life. Way bigger.

Burke’s profoundly regal bearing, underscored by his insistence on performing while seated on a red throne with a crown adorning his head, came to him entirely naturally. Baltimore deejay Rockin’ Robin christened him the King of Rock ‘n’ Soul in 1964 amidst great hoopla, and Solomon took that gala coronation literally. As one of the greatest of all ‘60s soul singers (Jerry Wexler, his former producer at Atlantic Records, deemed him the absolute best), Burke was one of the top R&B hitmakers of that decade. Burke managed to remain contemporary as the decades progressed; the Rock and Roll Hall of Famer won a 1992 Grammy for Best Contemporary Blues Album, and his 2010 disc Nothing’s Impossible, produced by recently departed Memphis icon Willie Mitchell, won widespread acclaim."


Here is Kit O'Toole of blogcritics.com with an appreciation..


"What makes a great soul singer? Thinking about legends like Wilson Pickett, Aretha Franklin, Otis Redding, and Mavis Staples, just to name a few, one quality immediately comes to mind: sincerity. Each of these singers possessed the ability to sing with utter conviction, making the listener feel every heartache, each moment of joy, or even anger. 1960's soul man Solomon Burke, who passed away October 10 at 70, had this unique skill; his bluesy, sometimes husky, voice acted out emotions expressed in lyrics, demanding that the audience hear—and consider—every word in a song. While he may never have cracked the Top 20, Burke's brand of R&B influenced the Rolling Stones and helped usher in a golden age of soul music."


"Soul music powerhouse Solomon Burke’s life was filled with great performances — from tent revival meetings to sweltering nights in southern roadhouses to concerts at the Apollo, the Montreux Jazz Festival, Bonnaroo, and even a Ku Klux Klan rally.


But one of the most memorable, at least for the few in attendance, was in 1994 at the Original House of Blues in Cambridge, where Burke — after two sold-out nights playing a catalog of hits reaching back to 1961 — donned the raiment he wore as bishop of the House of God for All People church and sang gospel to an audience of roughly 30 sitting rapt at his feet as he perched on the lip of the stage. Occasionally he moved the microphone away from his mouth to let his voice carry naturally, casting a spell with its absolute clarity, complex tones, and uncanny ability to move from gravel-dappled lows to falsetto without skipping a note."