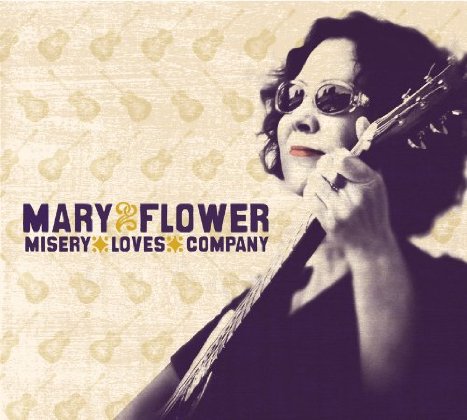 The marvelous blues and roots fingerstyle guitarist-vocalist, Mary Flower, has a new release Misery Loves Company (Yellow Dog Records). The title refers to the fact that eleven of the twelve performances here are duets with other musicians (and a vocalist) adding support to her guitar and vocals. It is a wonderful addition to her discography.

Whether performing a blues or a rag, Mary Flower plays wonderfully with an easy flowing approach to her music. When performing a deep Chicago blues, such as Muddy Waters’ Hard Day Blues or Son House’s Death Letter Blues, she recasts the song into a Piedmont styled blues, while adding her honey-toned vocals. Her vocal strikes this listener as more successful on the former number (with Curtis Salgado adding some nice harp), although the slide guitar and guitar interplay between her and Alan Hager is marvelous. Recession Rag, is a delightful instrumental duet with mandolinist Brian Oberlin, while Jitters is a lovely duet with tuba player Mark Vehrencamp that with Mary channelling Blind Blake in her deft playing here.

Colin Linden adds electric dobro her atmospheric Way Down in the Bottom, (where darkness meets despair), while LaRonda Steele adds a harmony vocal to Mary’s exquisite rendition of Reverend Gary Davis’ Goin’ To Sit Down On The Banks Of River, with an accompaniment that displays how ably she has mastered the music of this legendary giant. Her son Jesse Withers plays bass while she displays her cleanly articulated slide playing on Tampa Red’s Boogie Woogie Dance, while pianist David Frishberg adds some bop-infused piano on the delightful I’m Dreaming Of Your Demise, about her beady-eyed, devious man who spouts nasty lies. Mary’s music possesses some of the same qualities that Elizabeth Cotten’s music had so its no surprise that she so ably interprets Shake Sugaree, where Johnny B Connolly embellishes her vocal and fingerstyle wizardry with his button accordion.

A solo rendition of Scrapper Blackwell’s Scrapper’s Blues is the last selection on her latest recording. Mary Flower continues to delight blues and roots fans with a recording that continues to demonstrate that she remains one of the finest fingerstyle guitarists. Also her vocals flow as natural as her finger picking.

My review copy was provided by Yellow Dog Records.
Posted by Ron W at 12:05 AM