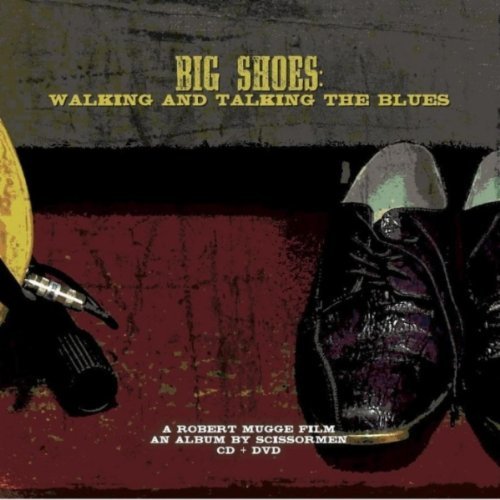 The duo/band Scissormen is comprised of the vocals and guitars of Ted Drozdowski and the drums of R. L. Hulsman and have been laying down their North Mississippi Hill Country inspired blues for several years including having made several recordings. Now under the imprint of the VizzTone Label Group, Scissormen have a combined CD/DVD release, Big Shoes: Walking and Talking the Blues. The CD is a live concert recorded at the Key Palace Theatre in Redkey, Indiana, while the DVD is a Robert Mugge produced film that intersperses the concert performances with a slide guitar workshop at Indianapolis’ Slippery Noodle Inn and an appearance at Cleveland, Ohio’s Beachland Ballroom.

Drozdowski is a music journalist as well as a musician with a defining moment when he became acquainted with some of the musicians of the Hill Country such as R.L. Burnside, Junior Kimbrough and Jessie Mae Hemphill (becoming acquainted with the latter after her stoke curtailed her music making career). The musicians and their songs shaped Drozdowski and his approach that although his playing perhaps rocks a bit wilder than those of his influences. But from them he learned to tell a story through the songs and his playing and he also realizes that he isn’t an academic recreating past musical glories, but uses his personalized adaptation of the style of RL Burnside especially to forge his own musical vision, aided by Hulsman’s very adept support, at time just pounding the groove and at other times adding a parade type rhythmic counterpoint.

The songs are mostly originals by Drozdowski (a few with Hulsman) with one direct cover with several benefiting from spoken introductions that help set the mood. If not as compelling a singer as his musical idols, Drozdowski more than an able one who performs with style, dynamism and a subtlety that may not always be obvious. The recording opens with the title track where Drozdowski tells about when asked about his right to play the blues, it’s a free country, but he is going to do it his own way to fit his own big shoes. Without going into a track by track listing, I should mention some highpoints which include the brooding slow blues The Devil Is Laughing, inspired by R.L. Burnside; the rollicking cover of Burnside’s Jumper On The Live; Tupelo which sounds inspired from a brooding John lee Hooker blues on the flooding of Tupelo, Mississippi that mixes contemplative moments with others marked by hard driving slide as he chants ‘didn’t it rain, oh lord”; Jessie Mae his loving remembrance of Jessie Mae Hemphill; and Whiskey and Maryjane, which he needs to cure his pain that is a hard rocking number.

I had the pleasure of seeing Scissormen and the CD captures the energy and passion of their live performances quite adeptly. The DVD is a fascinating mix of concert film that give a sense of their showmanship in addition to musical skill as well as the folks operating the venues they are seen performing at. So we have Drozdowski chatting with the owner of the Key Theater and including a discussion of the replica plantation cabins constructed to house traveling musicians; learning about the Slippery Noodle’s history as well as see him walking out to the audience, playing slide with a beer can while laying on a chair and more. There are nuggets that can be drawn out of the interview segments, but the video of performances are the real treasure of the DVD of Robert Mugge’s latest film. Certainly the combination of CD and DVD makes this quite an attractive package of the music of a duo that is doing its best to provide their own interpretation of this aspect of the blues tradition. Scissormen certainly fit their own Big Shoes on this dynamic recording and video.

I received a review copy from a publicist for the release. Here is a video of Scissormen.