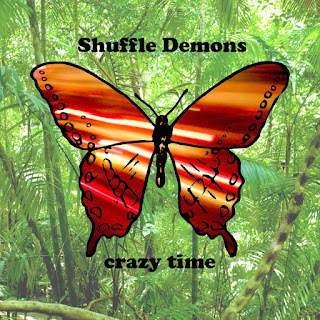 The music here is funky and groove-oriented with the melodies usually stated through uniform horn lines. The individual musicians, including the bass and drums, have their spotlight. There are stunning solos such as by Underhill and Lagan during the opening "Cat Walk," as Downes' bass anchoring the groove. Underhill raps on societal issues on "Have a Good One," as the horns riff in support. There is the stirring "Wandering Heart" with more excellent tenor sax and the driving topical "Crazy Time," as Underhill raps-sings about living in these crazy times. There is also an unusual blues, "Even Demons Get the Blues," on which Mike Downes contributes a steady bass ostinato and solo. It is possibly Kelly Jefferson, the tune's composer, who provides a wailing tenor sax solo here. More of a bluesy groove can be heard on the closing "Blue Chameleon," with more gutbucket tenor sax, perhaps from Mike Murley.

One can not ignore just how crucial bassists Downes and Vivian, along with drummer Wynston are to the success of the music here. Wynston is an especially exciting drummer playing with explosiveness at times. While there is a dance quality to this music, there is also plenty of substance in the various solos. "Crazy Time" is a lively recording with plenty of musical substance.

I received a download to review from a publicist.  Here is a video of the Shuffle Demons performing at the 2018 Panama Jazz Festival.